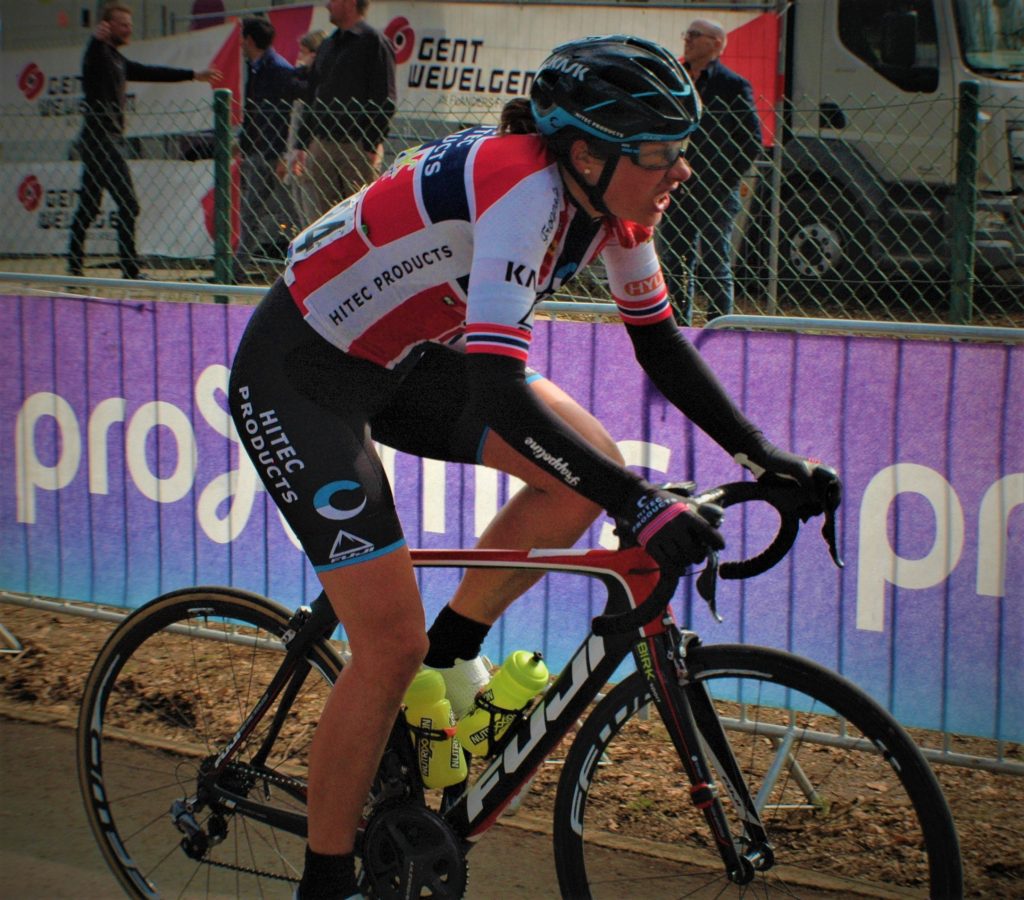 Vita Heine is a bit of a staple of the women’s peloton. She’s been racing in the pro ranks since she joined Hitec Products in 2014, managing to carve out a long career in the volatile world of women’s cycling. Originally from Latvia, Vita Heine made Norway her home and has been Norwegian national champion 5 times. After changing teams for 2021, she took her 4th Norwegian national road race champion’s jersey this year. Her first national championship win since 2018. Now riding for Massi-Tactic, Vita Heine’s team for 2022 is currently unconfirmed.

We saw you recently racing at the Ladies Tour of Norway, where you got into a breakaway with Brodie Chapman. How was it racing again in a major race on home roads lined with supporters for the first time since 2019? Did it feel any different?

​Cycling in Norway is not a big sport, but supporters are so, so great in big races. This we could also see this in World Championships in 2017 in Bergen and in men’s races like Arctic Race and Tour of Norway. It was great to see and hear all the fans.

You also recently won the Norwegian national championship (RR) for the first time since 2018 – how does it feel to be back in the Norwegian jersey for the next 12 months?

I kind of needed this win too since I have not had many top results this year even if I have felt strong. Sports can often be so difficult mentally when you work very hard, but don’t get rewarded. My goal was to win the national TT championships, but I did not have a good day and was second which was very disappointing. Winning the road race made up for it.

How has the experience been racing for a Spanish team this season? Are there many differences between racing for Massi-Tactic and Hitec?

It has been very fun to get to know the Spanish culture and I have enjoyed it a lot. The people – staff and girls – are very warm and welcoming. The difference is that Massi-Tactic is a new team and they are still learning and growing. Hitec is one of the oldest teams in the peloton and they know how everything works in and out. They even know every small hill and road in Belgium. Being a new team Massi Tactic is very positive about the future and the bosses have a positive yes-mentality. The team has for sure difficult times economically since Spain has been affected by Covid so hard, but the team gives extremely much back to sponsors. We put a lot of time and effort to make videos and on social media. If any reader would like to support us, then I can tell that the return on investment would be great.

It was not a big goal at the beginning of the year since at the end it is “just” a cat 2 race, but when we were going to the race it was important for us. As a small team with many young riders, we have not had any top results in the biggest races so far this year. We have mostly done World Tour and cat 1 races. The team was ready for a win. I think my shape was not the same as in 2019, which was my best season, and I lost some time in the time trial. The mistake I also did in road races was that I felt I had to defend my result from 2019 and I did not take chances to go in breakaways and risk winning or losing, which Joss Lowden did bravely and got a huge gap on the last stage. In cat 2 races teams are often not strong enough to control the race, so getting away is a very good idea. It’s a nice race and a type of race I enjoy – hard, but not for pure climbers. And I prefer longer races, like 140-150km since I have great endurance.

We’re starting to near the end of the 2021 season but do you have any racing goals left this season and also heading into 2022? Do you hope to be racing at the Worlds in Flanders?

We will do World Tour races Plouay and La Vuelta with Massi Tactic and I will go to European Championships. After that the selections for Worlds will be done. I hope to do well in TT in European Championships, but I have only done 2 TTs this year so far, and both were not so good by my own standards, so I’m not sure what to expect and what to set as a goal. I think the goal would be to do a good TT independent of the result. The same with the road races I will do now in August and September. For Worlds, I am for sure a strong enough rider to be selected, but probably our national coach still wants to see me racing well in the upcoming races and see that I can position myself well in critical moments of the race because that will be the key in Worlds in Flanders.

There was a lot of attention on Anna Kiesenhofer’s maths degrees after the Olympics and I believe you’ve also got a Masters degree in Statistics. Does having that background give you any advantages when it comes to cycling? Potentially in a practical sense with analysis of your riding data and mentally as well.

I guess me and Anna Kiesenhofer have some things in common, I guess we like numbers, like to think and analyse. That is not necessarily an advantage in road cycling, but I think it is in time trialling where you need to be smart yourself or have smart people around you. Being a bit older and having a degree or job experience is beneficial in a way that we are used to structured work, have more consistency in training and take more responsibility in our own development. I try not to overanalyse my numbers, because in the road races many other things are more important – positioning in the peloton and all the decisions that are made during the race. Anyway – it was exciting and inspiring to watch Olympics.

I remembered Anna from a similar breakaway in Ardeche in 2016 where we got away early, rode all day in the breakaway, got a 7 min gap and then Anna rode away from us and won on the top of the Mont Ventoux. As I remember we were 5 or 6 in that break away all day. Anna was very anonymous on the flat part not taking too hard pulls until we got to the bottom of the climb where she just rode away. So when I watched Olympics, I knew what she was capable of.