This Christmas, I set myself the challenge to complete the Rapha Festive 500 again. The challenge that Rapha set is to cycle 500 kilometres between Christmas Eve and New Year’s Eve, which given the Winter weather and social restrictions of that time of year presents a fair obstacle. I completed the Festive 500 back in 2014 so knew that I could do it again, provided the weather was kind and I was sensible.

Day 1 was tough, a ridiculously windy day and I didn’t get to enjoy much of the wind behind me on the fun sections! The headwinds were on the already more difficult rolling sections with the climbs and long steady gradients. Disappointingly towards the end of the ride when I should have been able to tank along with the wind, I had to keep stopping because round seemingly every bend was a horse – it turned out the local hunt were out doing their thing. I slogged through 39.6 miles on my own, but didn’t particularly enjoy it – an inauspicious start!

The second day was Christmas Day, just like two years before I split today’s mileage into two separate rides. Making sure I’d done the bulk early in the day, it was another windy solo day but thankfully dry. With the wind in the right direction, it was fun blasting along the lanes using the body as a sail. A nice easy 10 miles later on in the dark along the flat roads not far from home.

I get some company on the Festive 500

Boxing Day saw me join the Stratford Cycling Club’s Boxing Day ride, a leisurely jaunt of 50 miles for me. Meeting up at Box Brownie, a great cafe in Stratford, we headed up towards Shrewley and Lowsonford before heading back to Stratford via Alcester. I sat in the wheels for most of the ride, being told I was showing off because of my trackstanding whilst waiting at junctions, before taking the reigns near the end of the ride. Somehow we managed to get split up coming up the rise by Billesley, but being so close to Stratford it settled into two manageable groups. Just about 1 mile from Stratford and on a short rise I decided to liven things up by attacking on a small rise, blasting away with only Max managing to bridge the gap on the way into Stratford. We decamped into a cafe for some more coffee before heading home.

The next day was another social club ride with most of the same (allbeit smaller) pack. We did 25 flat miles to begin with towards Bretforton and Badsey before making the turn back towards Stratford, someone was clearly bored and fancied a hill or two so we ended up both Saintbury and Baker’s Hill. Max smashed up miles ahead of everyone else, I was setting a good pace ahead of John and Dave but thinking we were making the left turn halfway up Saintbury pulled in, only to find we weren’t as those two went past. Momentum lost, the rest of the hill was a struggle. Leading the charge past Chipping Campden and down into Mickleton, Baker’s was taken far more sedately. Again a last little sprint was had just outside of Stratford, pleased to say I got the tactics right having sat at the back to begin with, moving up the line as people dropped out and making the sprint count at the end. Back into town for more coffee again! Managed to get another 11 miles done that evening cycling into down for some drinks.

After the harder previous days, the 28th was a relatively rest day, just a ride over to Shipston on Stour and back to see my grandparents. Still 17 miles though to keep things ticking over nicely.
The legs were beginning to ache and felt very heavy on the 29th. It took me most of the day to work up the energy to head out and I only did 21 miles that day on flat roads. I accidentally set a bit of a PB on half of a local TT circuit, which I ended up using as a banker time to try and beat later in the week.

The club had another group ride on the 30th, the weather had changed from earlier in the week and got colder, ice was now an issue. The main road into Stratford was fine, but as we headed out towards Tysoe we found a particularly icy stretch and one of our group managed to hit the deck because of it. As we all stopped for a check up, it was hard to even stand upright at the moment and it became easier to get going again by starting on the grass verge! Tim and I decided we’d had enough of looking over the front wheel for ice all the time and bombed back into Stratford along the main road. Coming out of Stratford, crossing an island, my chain unexpectedly fell off. It turned out I’d completely destroyed the chainring, snapping it good and proper because a couple of chainring bolts had fallen out at some point. The bike was still rideable in the big chainring so that’s how I finished the ride. I got home, had some lunch and then popped out for another 20 miles on the main roads to get some miles advantage in again and have less to do the following day.

New Year’s Eve, just 25.5 miles left to complete. I went out solo, did a couple of loops of the Stratford Tuesday bash circuit by Ilmington and found time for a half-proper TT attempt to finish off. Into a headwind, I knocked over 50 seconds off the time of the first half set a couple of days earlier and set a time for the circuit which is a good starting point. Finishing in the dark I was glad to have it all over and done with – 500km in 8 days! 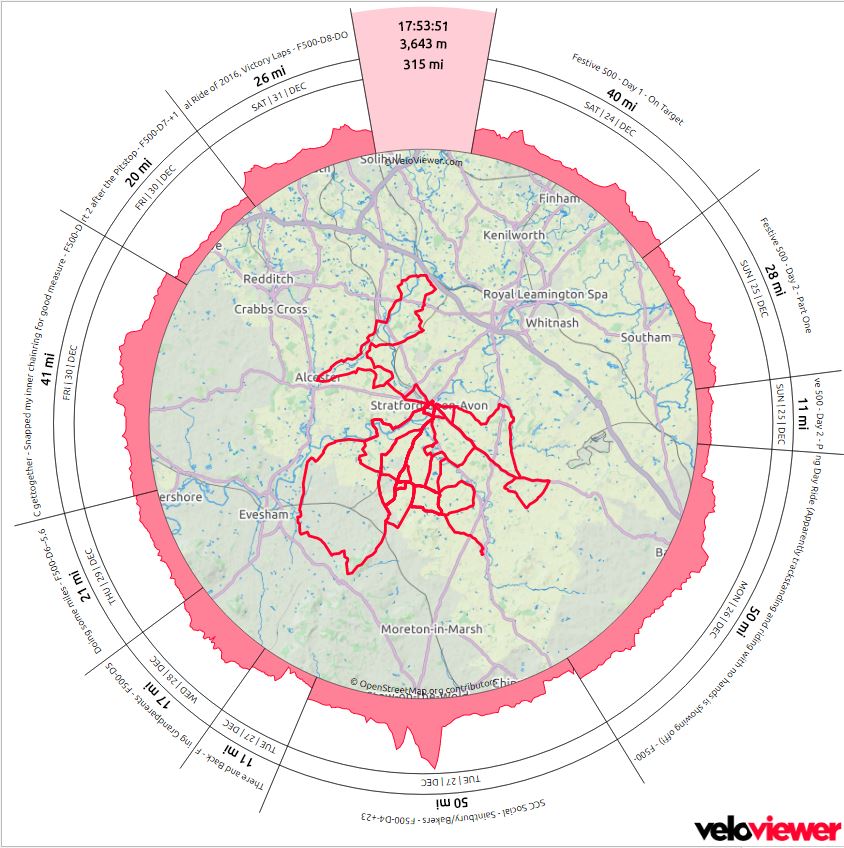 The patch for completing the challenge.