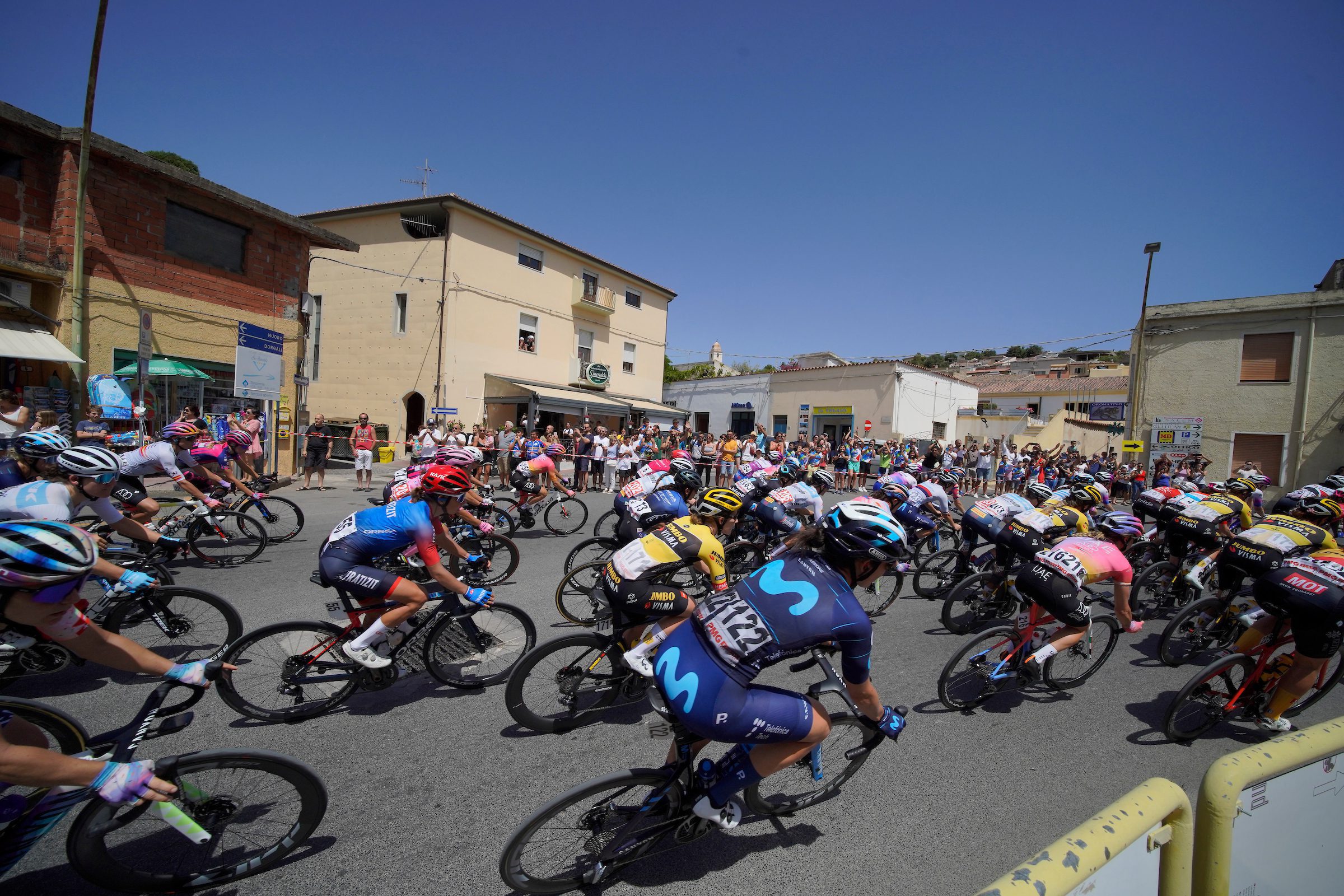 The Giro Donne has always had a reputation for some interesting route quirks, including late changes and one stage in 2020 where no-one quite knew where the finish line was going to be until Marianne Vos rode over it. Yesterday’s Stage 3, the final stage in Sardinia, saw GC riders affected by a roundabout around 3-4km from the finish.

That split the bunch up as some riders had to turn around from the wrong road and some had to brake suddenly to try and nip back to the right side of the road whilst going straight across.

The first rider to go left appears to be a Team DSM rider, possibly Megan Jastrab, although the video quality isn’t high enough to confirm this. Once she goes left, others naturally follow. Some of those who followed are riders with GC ambitions and they lost various amounts of time trying to get back to the peloton.

The final 3-4km in the road book, the infamous Anita named after Anita Garibaldi, were different to what was actually raced yesterday. The original route was due to go left after crossing the Riu de Saligheddu canal bridge and then go through narrow streets before reaching the mini roundabout at the bottom of the Viale Aldo Moro. This final street would take riders to the finish line.

Instead, we got a much more open and wide route, further East, that looks a lot safer than the original. The Giro Donne has confirmed that the route change was made for safety reasons and that the daily communique informed teams of the change to Stage 3’s finale.

So far I’ve had 3 different answers about whether teams and riders knew about the route. The first, that the correct gpx files were sent to riders a week beforehand, so any rider using their map screen should see the correct exit to take. One team said they didn’t receive a notification of a route change whereas one team said they did receive one.

Major GC riders who lost time by taking the wrong exit include Mavi Garcia and Clara Koppenburg. The GC hopes of Mikayla Harvey (5th in 2020) and Erica Magnaldi (13th in 2021 & 2018) were also affected. Garcia managed to close up to the group that was 6″ behind the front group, so didn’t lose too much time. But Koppenberg, Harvey and Magnaldi arrived at the finish together, 43″ behind Vos’ stage victory.

Despite protestations to the race jury, the time gaps are still in place and riders don’t look like they will get any special dispensation for the error. As this is being published, I believe the race jury hasn’t decided on a course of action yet – at least 2 teams have made contact about yesterday’s stage.

Yesterday in the last 3.5km due to poor signage by the organization, a group got into one of the last roundabouts on the left and then it was closed…. another time trial for me the last kilometers of the race fearing losing a lot of time of the general, being at the end 6 seconds after a great effort….
Several teams have complained because others have lost much more… but it seems that they are not going to do anything 🤨
I keep my good feelings and keep fighting because tomorrow will be a day to start the battle! The good thing of the day, Bertizzolo’s fifth place in the stage!!! 🙌
keep going!!!

What was the cause?

There seems to be a little bit of confusion about the correct route notification but the bulk of the riders, even some who ended up going the wrong way by following others, knew the correct exit to take. So with that in mind, it doesn’t seem the major contributing factor. It wasn’t helped by a large number of traffic islands in the latter part of Stage 3, with this one island, the only one which couldn’t be ridden around both sides.

Looking at the stage 3 footage, the peloton is full strung out across a wide road and is then expected to compress into a single lane for the roundabout and take the one exit. It’s quite a narrow route through the various bits of road furniture. A full-width peloton squeezing its way through would probably have ended up in a crash. At the next island, only 100 metres later, the traffic is stopped at the end of the lane the left-hand riders would’ve taken. So any rider going up there would’ve met stationary traffic, the reason for the lane closure is clear.

It’s a Team DSM rider, who is first to decide to go left and pretty much every rider on that side of the peloton follows her. What is clear is that there is no marshall directing the peloton into the single lane and no cones or barriers to signify the squeezing of the road into one lane. The peloton is allowed to continue uninterrupted onto the wrong side of the roundabout. Presumably, there was no marshall on that exit either as riders continued through. It feels like the presence of a marshall here would’ve forced all the riders onto the correct bit of road.