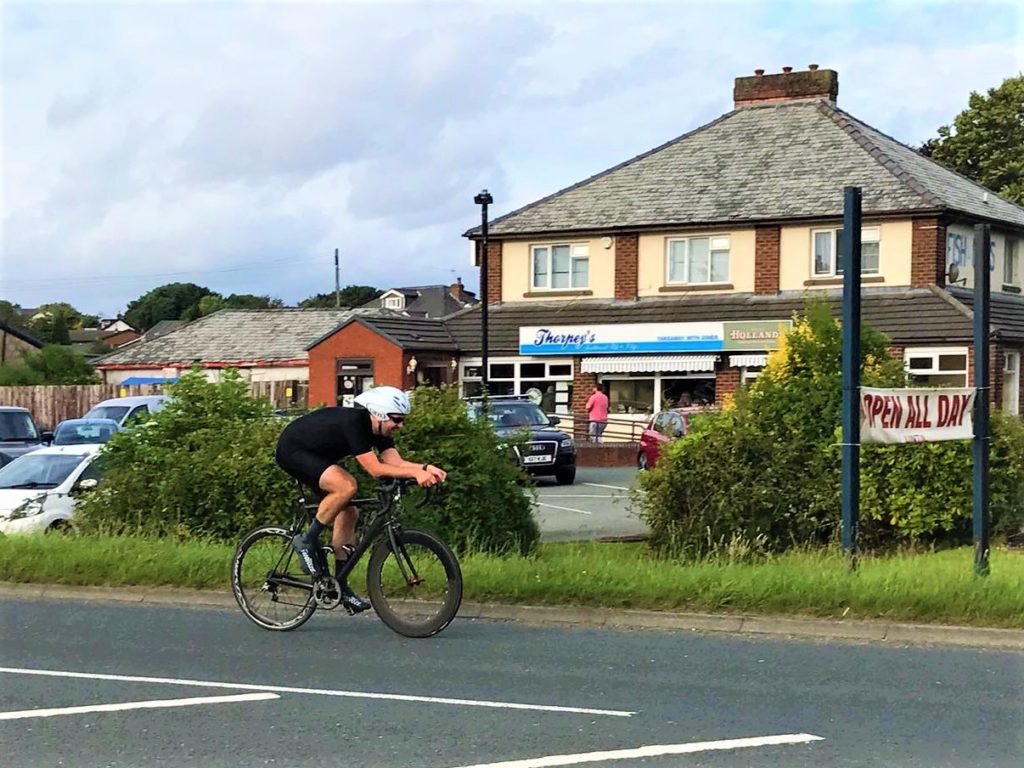 2017 is the first year that I have been riding time trials. Starting off with some club time trials, I’ve also started competing in Open Time Trials against lots of other people. I started off with the Coventry CC ride and followed it up with the Walsall RCC one shortly afterwards. The Springfield Financial Open TT was to be my first Open outside of the Midlands and combined nicely with a weekend away in the Lakes as part one of my birthday.

On paper the course (L101/10) looked like it would be the busiest time trial route that I’d had to do so far. Taking place solely on the A6 between Garstang and Lancaster. L101/10 is a simple out and back route with riders completing close to 5 miles, going around a roundabout and then returning close to where they began. Scenic points of interest included a Texaco garage, a motorhome seller and a chippy.

The HQ was in the village of Winmarleigh, specifically the village hall. Whilst the hall itself was nice, the toilets clearly need a refit in the near future – the pint glass with a web inside being a highlight. I signed in, got my number and went to get everything ready. Wolfed down an energy bar, checked the tyres and took off everything unnecessary like the water bottle. Once ready and nearing my start time, I set off for a gentle jaunt down a lane or two to get to the start point.

Any warm-up I do seems to be negated by arriving ten minutes too early, in an effort to not be ‘that guy’ who misses his starting time. I was starting late in proceedings so I was able to watch other riders on their last burst until the finish. Eventually my number was called and I rolled forward. With 30 seconds to go, I was held upright by the starter. I’m getting better and better and trusting someone to not just drop me as my feet leave the ground, but it still feels unnatural. The countdown reached 10 seconds, then 5 seconds – time to start the Garmin and finally 3, 2, 1 – Go! 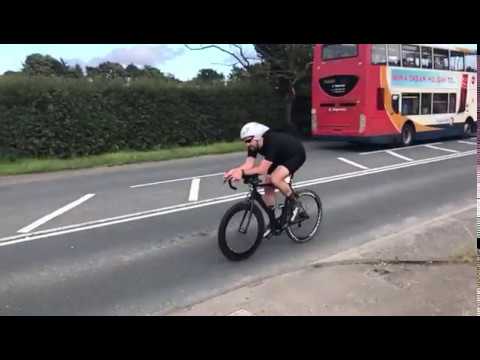 I set off quickly, then reminded myself to ease back a bit as I’ve been guilty of trying to smash it too early on previous time trials. I kept the cadence high to keep the legs as fresh as possible and didn’t put the hammer down on the early lumpy bits. The crosswind over the left shoulder felt like it was helping rather than hindering too. I flew past my fan at close to 2 miles in and began a short rise.

After cresting it and getting back up to speed, I caught up with a farm vehicle going slower. The worst bit however was a car that overtook late into the gap between me and it, only to then not be able to go past because of traffic on the other side of the road. Particularly annoying as I would have had plenty of room. I showed some displeasure at this, but in some ways the unintentional draft I was getting from the hold up was actually helping.

Once free from the clutches of both vehicles, I was able to power on again. The next person I saw however was the rider who had started 2 minutes behind me coming past. Not a good omen, especially as I couldn’t see the person I’d started behind – potentially a sign that I was going too slow. By the time we reached the island, he was already just coming off it as I entered it. I had a small moment of uncertainty as it wasn’t immediately obvious which was the correct junction to use to come off, but I did get it right, just.

Results sheet up in the hall afterwards – I was rider 58, trust me!

The small rises on the way back did get the power treatment and the descents were there to offset it with some higher cadence efforts. Somehow the crosswind still didn’t feel like it was hindering, it must have been one of those rare magical winds that only helps riders. The map had suggested that the entire final quarter was slightly uphill, however after putting in a strong effort between miles 8 and 9, the final mile was either flat or ever ever so slightly downhill. I’d been doing some mental maths based on what the Garmin had been saying and reckoned I was on course for a personal best. I put the head down (not literally, the helmet tail would stick up then) and gave it everything.

The crosswind nearly had me off passing the Texaco garage, a sudden gust caught the front wheel and made it feel like it was coming out from under me briefly, before I regained control. As I passed the finish line, I stopped the Garmin for an idea of my time. It turned out I’d done 24 minutes and 35 seconds, a new 10 mile personal best for me by 45 seconds! Clearly a quick course and one I reckon I could go even faster on now I’ve ridden it.

The one sour note of the whole time trial was whilst gently riding back along the lanes to the HQ I heard something go twang. Once back at the HQ I checked my spokes to find I’d snapped the nipple holding it in the wheel. Urgh, a cheap repair, but it’ll have to go into the shop asap!