This year’s Tour of Britain takes place between 2nd-9th September 2018 and the big draw is that Britain’s two best stage racers will be taking part. Now in its 15th year in this guise, the race has risen from 2.1 level up to 2.HC level – as a result, it has drawn in a higher and higher quality of peloton. The list of winners is varied and includes two-time winners Edvald Boasson Hagen & Lars Boom, home winners Bradley Wiggins & Steve Cummings, Dylan van Baarle, Nathan Haas and Michael Albasini.

This year’s race takes in a combination of the mountains of South Wales and the Lake District, the hills of Devon and Somerset, the rolling West and East Midlands, a hill-climb TTT and a city criterium in London to finish. The varied parcours gives a chance for a wide range of riders to bag a stage win. 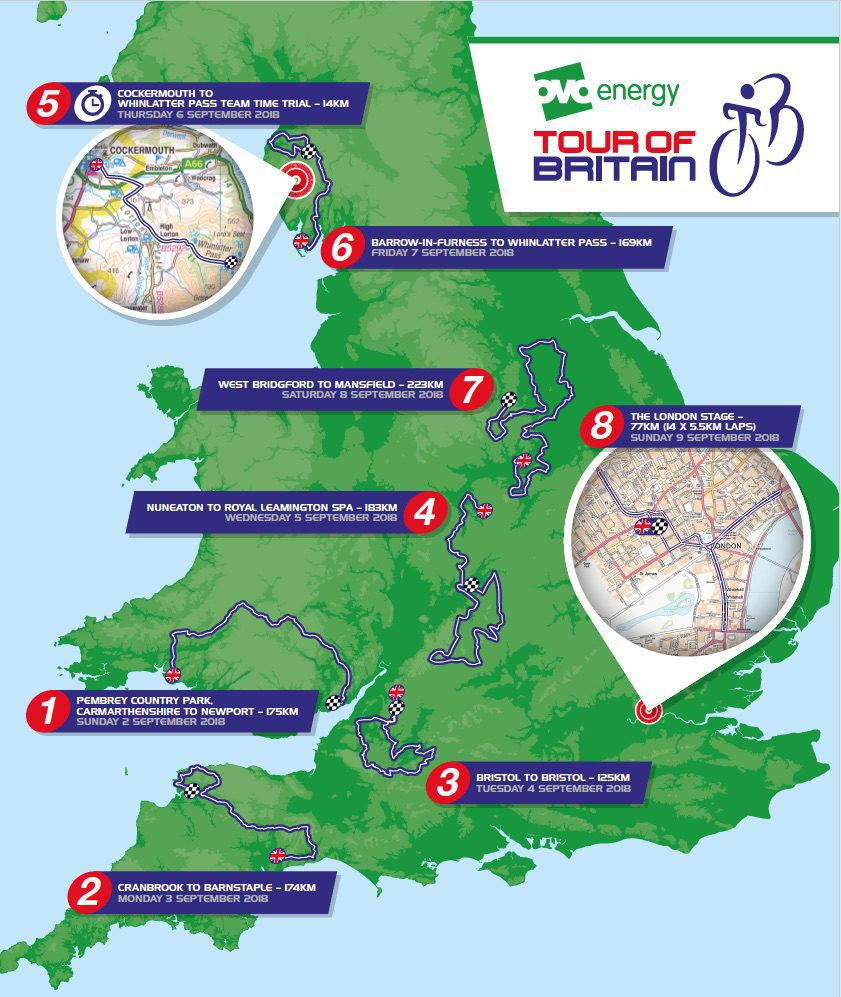 The obvious choices and the ones that the home supporters will be wanting to do well are Team Sky’s Chris Froome and Geraint Thomas. In theory, the climbs in the race won’t suit Froome as they’re too short and too steep compared to the Alps or Pyrenees. Geraint Thomas may be better suited instead, however – in previous editions he’s managed a 6th Overall and 13 stage top-10s. It may just turn into one large victory lap procession for him though.

Also in the hunt will be Wout Poels whose classics pedigree will suit the shorter, punchier climbs in the race – it just depends if the race situation allows him to go for it or if he’ll need to work for others.
Team Sky could potentially walk the race if they produce a dominant team time-trial up Whinlatter Pass – with Ian Stannard and former World TT Champion Vasil Kiryienka, it’s a strong possibility.

Lotto NL-Jumbo’s Primoz Roglic is turning into a genuine Grand Tour contender, 4th in this year’s Tour de France is evidence of that. He absolutely tears up one-week races though. He’s won the Tour of Slovenia, Tour of Romandie and Tour of the Basque Country this year alone – not bad for a ski-jumper. He’ll be using the Tour of Britain as a warm-up for the World Championships at the end of September.
Two-time winner Edvald Boasson Hagen will be racing, he finished 2nd by just 8 seconds in 2017 as well. The parcours suits an all-rounder like him and after finishing 4th on the Champs Elysees this year, has shown he will be a factor in the London crit stage too. He finished 3rd and 4th in this year’s Tour of Norway/Tour des Fjords which contain some similar stages to show his form. He may struggle with having to drag his team along in the team time trial stage though.

Sylvain Chavanel is on the way out – he’s retiring at the end of this season. As such he’d like to finish with some strong results. A strong time trial allowed him to finish 2nd overall at the recent Poitou-Charentes Tour recently, similar to a result earlier in the season at Etoile de Besseges where a good time trial allowed him to finish 4th overall. The rolling parcours will not present any issues to him but will need his team to join him on the team time trial.

Wanty’s Xandro Meurisse is a solid one-week racer at Worldtour level, at the level below he translates that into top-15 overall results. He’s managed a 2nd overall at the Circuit Cycliste Sarthe, 6th at the 4 Jours de Dunkerque this year and 13th at the Tour of Denmark.  He’s also just won the Druivenkoers – Overijse one day race.
His recent result of 24th at the BinckBank Tour is encouraging but he lost time at the time trial – that weakness will probably cost him here.

Katusha’s Tony Martin has a strong team behind him, particularly with the team time trial stage in mind. Being able to link up with home rider Alex Dowsett will save him having to all the pulling himself. Martin also finished 8th in the Tour of Britain last year finishing reasonably highly on stages and using the time trial to jump up the rankings.
Other teammates Nils Politt and Dimitry Strakhov will prove solid backup options/help as well – Politt recently came 2nd in the Deutschland Tour and Strakhov 9th in the Arctic Race of Norway. With such a good week long stage race team, one of Katusha is a cert to finish in the top-10.

One rider who will excel at the team time trial stage if his team leads by example is BMC’s Stefan Kung. He’s off to a new team (FDJ) in 2019, so will want to finish strongly with BMC. He won the time trial at the recent BinckBank Tour as well as the Tirreno-Adriatico TT and both of the TTs in the Tour de Suisse earlier in the year. A strong team time-trial could put Kung in the position to win the overall.

Aqua Blue initially were not going to return for 2019 – they then updated to say they were folding immediately and wouldn’t be participating in the Tour of Britain. They’ve been replaced by Team Wiggins.

The Team Wiggins pair of Tom Pidcock and Gabriel Cullaigh are ones to look out for – possibly as more of a stage hunting team than as genuine GC contenders. Tom Pidcock hit the headlines in a big way deep into the 2017 season when he won the junior World Championship in the time trial as well as going onto win the junior World Championship in cyclo-cross. On the road this season he’s followed that up with 3rd in the U23 National time trial, 6th at Market Heistse Pijl and 9th at Rutland – Melton. There’s a break-out result coming soon.
Gabriel Cullaigh is probably the stronger of the two when racing on the road at the moment, he won Rutland – Melton this year and has numerous strong finishes racing at U23 level on the continent. Throughout August he’s been racing in Belgium and Holland in one-day races, finishing around 20th in each race. Like Pidcock, there’s a break-out result on its way.

The Tour of Britain has managed to entice 3 of the world’s biggest sprinters to its 2018 edition.
The Australian Caleb Ewan will be sprinting with his usual head down low style. After deciding to move teams to Lotto-Soudal next year, he was kept out of the Tour de France but he’s also somehow only had 3 wins this season as well. He came close at Milan – San Remo to finish 2nd but more recently he took 3 top-5 finishes in the BinckBank Tour.

The German pair of Andre Greipel and Marcel Kittel will be riding too. It’s Greipel’s spot at Lotto-Soudal that Ewan is filling for 2019 and Greipel will be moving down a level to Fortuneo – Samsic. He’s been at Lotto since 2011 so it’ll be the end of an era of sorts. Relatively speaking he’s struggled in the second half of 2018 – managing only a 6th in one stage at the Deutschland Tour, 3rd at another in the Tour de Pologne, 8th in the Ride London Classic and a smattering of top-10s at the Tour de France before abandoning.

Marcel Kittel was due to race but has pulled out to identify and recover from the illness that has dogged him this season.

The next ‘division’ of sprinters includes Edward Theuns.  He’s a sneaky outside bet for the overall as the rolling stages will suit him, but he’ll have to cling on during the team time-trial. Not an out and out sprinter, he’s capable of matching it with the best when the mood strikes. A 6th place at the season opener Omloop Het Nieuwsblad has been his best result other than special Hammer Series events. 16th in the recent Great War Remembrance race might be a hint that there’s some form in the legs.

BMC hopes rest on one of Jempy Drucker and Jurgen Roelandts who will be moving onto Movistar for 2019. He’s another in the mould of Theuns who could be a sneaky outsider bet for the overall if the race pans out in a kind way. He may lack some of the outright speed for the proper sprints but on harder stages, he starts to come into his own as the classics skills come in. 5th in this year’s Milan – San Remo was a great result, more recently he’s finished 11th at the Hamburg Cyclassics.
Jempy Drucker is probably the better bet for a more traditional sprint finish – he took two months off after the Giro d’Italia but came back with 5th at the GP Cerami and 7th at the Ride London Classic. A 6th on a stage of the BinckBank Tour is a good indicator of form as well.

The final group of sprinters includes Brits Daniel McLay and Adam Blythe. Dan McLay has had an interesting season with some sporadic strong results at Worldtour level, particularly earlier in the season. He won a stage of the Circuit Cycliste Sarthe back in April for his best result. A 2nd place in the more recent Tour de Pologne beating the likes of Andre Greipel and Jurgen Roelandts shows his potential upside.

Wanty Groupe Gobert’s Italian sprinter Andrea Pasqualon had a very good Tour de France this year with 7 top-10 sprint finishes. His best result this year was definitely at the Tour of Luxembourg, where he won 2 stages and finished 3rd twice to take the overall classification. The harder stages in this year’s Tour of Britain should prevent a repeat but he’ll definitely be up there when the race finishes in a sprint.

Britain’s national champion Connor Swift will be racing the Tour of Britain. At the time, a somewhat surprise winner of the national jersey, Swift has quietly been having a good season. Along with that national victory, he’s finished 17th overall in the week long Tour de Normandie (inc. a 2nd place stage result), 4th in Rutland – Melton, a 6th place day in the Tour de Yorkshire, 2nd overall in the four day Kreiz Breizh Elites race and 5th in La Poly Normande. Only 22, he’ll be looking for a strong sprint result at home in the national jersey.

As above, no more Aqua Blue Sport.