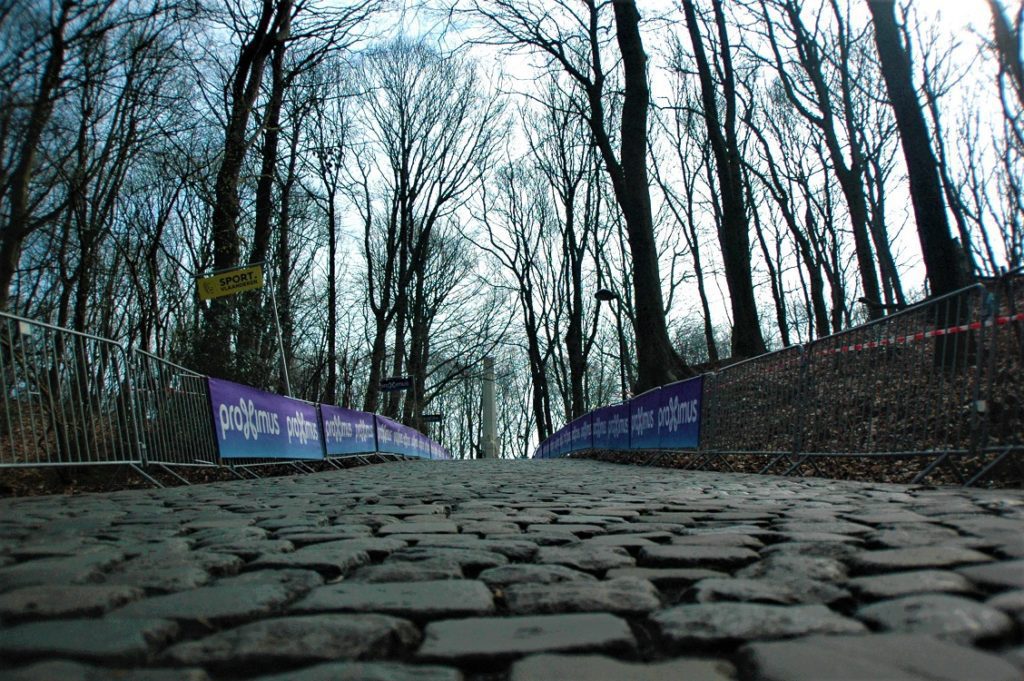 The Great War Remembrance Race is a new 1.1 level race taking place in Western Belgium on 24th August 2018. The race has been organised to commemorate those that lost their lives in World War I, which finished 100 years ago. The route takes in a gentle start from the coast to the Heuvelland region, passing many of the battle lines and graveyards from the Great War. The route chosen gives a nod to those used in Driedaagse De Panne and Gent – Wevelgem.

The riders will race across the gravel sections of the Plugstreets before tackling a combination of the Monteberg and the Belvedere side of the Kemmelberg before skirting around the back of the Ossuary climb for a blast back into Ypres to decide the winner.

As a Belgian race, Quickstep Floors have brought a typically strong team. Fernando Gaviria will be the favourite as the biggest name riding. As shown below, the shortness of the Kemmelberg means strong sprinters can keep up with some of the classic specialists.

If the plan to get Gaviria to a spring finish doesn’t happen, Quickstep can fall back on the likes of Belgian national champion, Yves Lampaert and the classics specialist Zdenek Stybar. Lampaert’s having a strong season, he won Dwars Door Vlaanderen back in the Spring and finished 14th recently in the Worldtour level BinckBank Tour. Stybar won the points jersey at that race with 3 third places helping his cause. He also recorded top 10 finishes in almost all the Spring Classic races he entered.

Wanty Groupe Gobert’s hopes will be with Timothy Dupont. He managed a few top 10s in the sprint stages of the Tour de France but does better at the lower level that this race is classified as, claiming 2 of his 3 career wins in 1.1 races. He’ll be hoping the race stays together over the Kemmelberg.

As BMC come to the end of this version of the team (they’ve got a new sponsor for 2019), Jempy Drucker will be hoping they can sign-off in style. Recent good results have seen him sprint to 7th place in the Ride London Classic and 5th in the GP Cerami. He rode Gent – Wevelgem earlier in the year so should have some knowledge of the roads – another sprinter hoping to make it to the finish in the bunch.

Ed Theuns hasn’t had many opportunities to work for himself in the second half of 2018 – He was able to do well in both of the Hammer Series events, finishing 2nd and 9th overall. A 6th place back in February in Omloop het Nieuwsblad promised much but 24th was his next best result in the Spring. He finished 32nd in Gent – Wevelgem. Not quite on the same level as an out and out sprinter, he’ll be best served to sprint in a reduced bunch.

Verandas Willems-Crelan’s Sean de Bie has had a great season. He dropped down a level from the Worldtour this year and it’s allowed him to race for himself a lot more than when he was a part of the Lotto Soudal team. He’s only won one race, but he’s finished in the top 5 on 8 occasions. At this level, he’s almost guaranteed to find himself sprinting to a top 10 finish.

Roompot – Nederlandse Loterij will be backing their sprinter Coen Vermeltfoort. He was 2nd on the pan flat Elfstedenronde this year, a better indicator of what he’s possible of was the 3rd place in the Trofeo Palma – a large hill followed by a flat run-in sort of echoes this race.

Israel Cycling Academy’s Estonian sprinter Mihkel Raim has won races across the globe this year. He’s the Estonian national champion and has also won races in South Korea, Japan and Spain. He’s failed to finish his last two races though which puts him in this outsider section.

Irish team Aqua Blue Sport have been invited to a race – well done them! Their hope for the win is Danish all-rounder Lasse Norman Hansen. He finished 3rd in the GP Stad Zottegem this week, but it was in a fractured race that he didn’t have to sprint against others for. If the race does split up on the Kemmelberg, this will suit Hansen perfectly to stay away until the finish.

A genuine outsider from Continental level, Jelle Mannaerts of Tarteletto-Isorex. He’s not raced at this level since the end of June, only racing local races in Belgium, but before then managed top 10s at 1.1 level in a number of races. Most notably in Tro Bro Leon where he just missed out on winning himself a piglet (it’s true, look it up!) by finishing on the podium in 3rd spot.

Finally, youngish German sprinter Jonas Koch for CCC has been getting strong results in 2018. He finished 10th in the same GP Stad Zottegem race this week but also finished 9th in the Worldtour Ride London Classic a month ago. He’s had strong results dotted throughout the season.