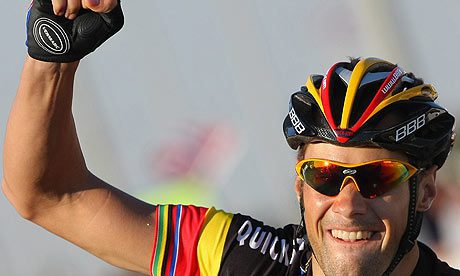 Qatar has become a useful holiday destination for cyclists in the last ten years, in particular it’s the sprinters who have the most fun. The race has nearly always been won by a sprinter, usually one who does well in the classics and usually Tom Boonen.

The Tour of Qatar has been won 4 times by Tom Boonen who has also won the points competition a mghty 6 times. It’s safe to say that he considers this race an integral warmup for his Spring season. He had a very off 2013, a series of poorly timed injuries meant he was never quite on the pace and spent most of the season not racing. He’s back in Qatar this year and could be capable of matching his historical results if he can ride into some form. A fit Tom Boonen would be a reasonable favourite for the race this year.

The very flat nature of the stages lends itself to a host of sprinters being able to get some early season stage wins. Mark Cavendish won here last year but is going to Dubai instead this time out, someone who will be glad of that is his former teammate Andre Greipel of the Lotto-Belisol team. He got off to a flyer this season down in Australia, winning the properly flat stages in the Tour Down Under. He’s certainly the most in form Elite sprinter going into this race. Big things are expected from Elia Viviani this season and he can show his promise with a WorldTour win in Qatar. He’s definitely capable of winning sprints but sometimes seems to lack the tactics to be at the front everytime it comes to the finish. Heinrich Haussler is in a similar situation to Boonen, he’s a previous mutiple winner of this race but has been affected by injuries in the last couple of years, he’s capable of being up there and doing well in powerful sprints but should be beaten by the pure sprinters.

Belkin have gone for a two pronged approach with Theo Bos and Robert Wagner, both are capable of getting a stage win but often go missing at crunch time. Greg van Avermaet will be carrying the hopes of BMC as he prepares for the Spring Classics, he has a decent history with an Overall Podium and a stage win but they were a few years ago now. Flying the French flag will be Arnaud Demare who has had a couple of decent wins in the last year but without a strong sprint train will probably get some top-10 places rather than wins. Based on the last two years Aidis Kruopis will be the main sprinter for Orica GreenEdge, again like Demare, expect him to feature but not star in the sprints. Alexander Kristoff at Katusha is well fancied but will probably be in the mix without winning, he’s often about but rarely does he win against the fields at this level.

Overall, if I had to pick a winner, I would go for Tom Boonen given his domination of this race but a lot depends on how fit he is. Andre Greipel is a cert for at least one stage and could get the overall with Heinrich Haussler rounding out my preview podium.