What muscles does cycling work? 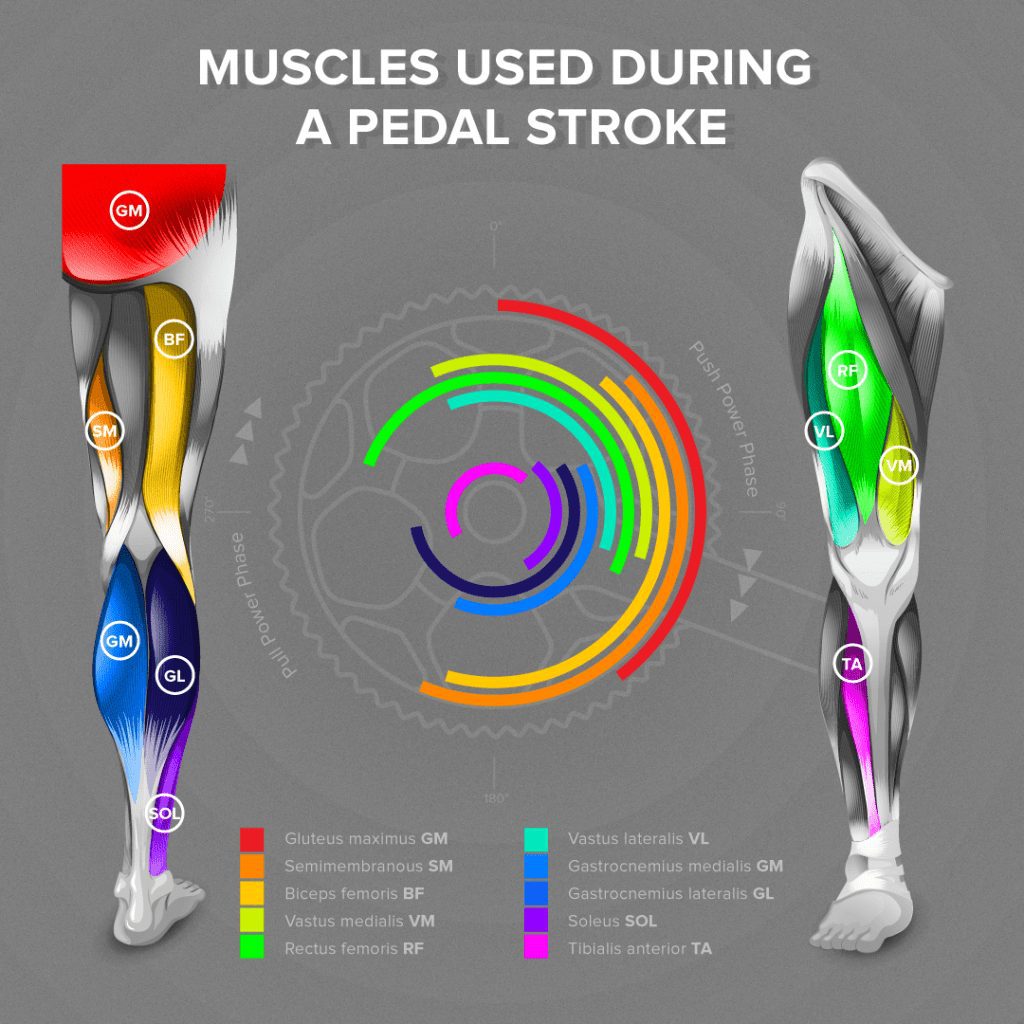 Fairly obviously, riders work their leg muscles in cycling a lot while riding. But anyone that’s ever done some running knows that the different sports use different leg muscles. Added to the legs, we use our arms a lot when out of the saddle and those infamous core muscles too. I’ll explore which muscles does cycling work on the human body.

The front of the thigh kicks in first of all. These are where the initial power comes from just before the top of the pedal stroke. Once the cranks hit the 12 o’clock a different muscle comes into play. The gluteus maximus pushes through and aids the transfer from the muscles in the front of the thigh to the back of the thigh.

The muscles in the hamstring area begin to do their work. Their job is to aid the switch from the pushing phase of pedalling into the pulling phase. The calf also does this work shortly afterwards. The gastrocnemius lateralis (outside calf muscle) does the longest job – working from 2 o’clock to 9’clock. The tibialis anterior completes the pedal stroke work and helps move back into the pushing phase. It’s the same process to identify which are muscles used cycling stand up out of the saddle too.

This great infographic shows the cycling muscles worked during the pedal stroke.

Having a strong core is one of those things that plenty of articles have been devoted to. The set of muscles around the stomach and back area play important roles in keeping riders upright and delivering power.

A strong core helps to stop side-to-side movement that reduces efficiency. It also helps to prevent potential injuries as other muscles work to compensate for the weak core. I’ve covered some exercises before.

Core muscles are also very important during time trials as riders have to maintain a set position throughout the race to stay as aerodynamic as possible. A weak core will see riders start to move around more on the bike and lose precious seconds.

The list of cycling muscled worked as part of the core are:

It doesn’t happen too often but every now and again I’ll get tired arms on the bike. Sometimes it’s the brutality of the cobbles in Paris Roubaix but more commonly steep hills are to blame.

The constant pulling back and forth on the bars whilst struggling up a gradient works the arms quite hard. There’s some tough climbs where it’s my arms that have got tired before my legs.

A similar but slightly different time the arms come into play is whilst sprinting. It’s seen most obviously when track sprinters are getting up to speed from standing starts. The likes of Mark Cavendish also have to pull on the bars whilst pumping the legs.

There’s a balance to be struck though. Big guns will just add weight most of the time so it’s a case of tone rather than bulk.

Aside from pulling on the bars, time trialists need strong upper body muscles used in cycling to hold their aggressive folded positions. Keeping in position without fidgeting or having to constantly adapt leads to quicker times and better results.