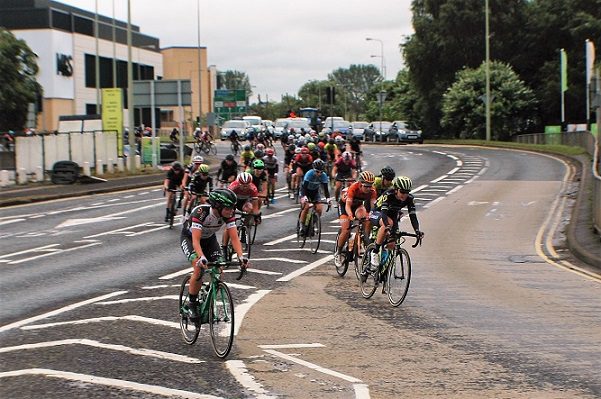 The 2019 Ovo Energy Women’s Tour (of Britain) starts on 10th June in the Suffolk town of Beccles. It then traverses across the middle of the UK, working its way down to Essex, across to Oxfordshire, a tiny burst north to Warwickshire and then heads west, where it spends 2 days in Wales. The end of the race is in Pembrey Country Park, completing a nice loop as that’s where last year’s edition started from.

Now in its 6th year, the race has previously come down to which rider has managed to earn the most bonus seconds in sprints. Stages have often finished in bunch sprints or been raced hard enough to split a group up into just the elite riders. Katarynza Niewiadoma’s solo break on the first stage in 2017 is the only time we’ve seen a proper solo win impact the GC. 2019 sees the first summit finish though, which the organisers will hope shake things up a bit – it’s also where I’ll be catching the race.

Katarzyna Niewiadoma won the Women’s Tour back in 2017, getting a large time gain on Stage 1 and taking it through to the finale. She’s had a good 2019 season, winning Amstel Gold and more recently finishing 5th Overall at the Tour of California. The summit finish on Stage 4 has a Cauberg-esque short hill sprint that will really suit her.

Marianne Vos is another former winner of the Women’s Tour, winning the first edition in 2014. She’s also had a good 2019, taking the win at Trofeo Alfredo Binda and the GC (and a stage) at the Tour de Yorkshire. A great one-day racer, the hillier middle stages will be up her street. She’s a great bet to win Stage 3 in particular, which has a similar parcours to this year’s Trofeo Alfredo Binda. She’ll be ably supported by Ashleigh Moolman, the 2016 runner-up. She’s been largely racing for Vos but still getting solid results. Top-10s at Strade Bianche and Fleche Wallonne set her up for the recent 3rd Overall at the Tour of California. The uphill finish on Burton Dassett might see her get her best result of the week.

The 2015 winner, Lisa Brennauer, will be racing for WNT-Rotor. She’s won the Overall at the Elsy Jacobs stage race and 6th Overall at the Tour de Yorkshire. 8th at De Ronde might be the highlight of her season so far. A genuine all-rounder, she’ll be a contender on each stage. European Champion Marta Bastianelli doesn’t have the best record in this race, the highest finish of 36th is her best result. She does, however, have 7 wins in 2019, in what has been a great season for her. A DNF at the end of the Thuringen Tour is the only blot on her record Bastianelli has unfortunately pulled out.

The Trek super team have a solid trident of options. Home favourite Liz Deignan is still on her way back into form ahead of the World Champs in September. She’s been quietly notching up some good results – 7th at Fleche Wallonne and 14th Overall at the Tour of California with 2 Stage top-10s along the way. In front of crowds supporting her, she’ll want to match her 2016 win. They also have the winner of Emakumeen Bira, Elisa Longo Borghini. She won the last stage to win the GC by just 2 seconds but hadn’t finished lower than 8th in the 4 stages. She could very well be Plan A for Trek. Trek will get Ellen van Dijk to do a long ranger. The sort that saw her win Dwars door Vlaanderen this year. The flatter stages 1 and 2 will be her best chances.

Boels Dolmans have a combination of Chantal Blaak and Christine Majerus. Blaak has been quiet recently after a strong Spring classics campaign. With that in mind, her current less good form may push her out of the conversation of genuine contenders. Christine Majerus is in better form and has the better record, finishing 2nd Overall here in 2017. Majerus has just won La Classique Morbihan, which has a similar profile to Stage 4 here.

Bigla’s Lizzie Banks is in great form. Her run of 6 straight top-10s came to an end at the GP of Plumelec-Morbihan last week. She’s yet to perform as well in the WorldTour races, a 25th at Ronde van Drenthe her best at that level. The lumpier the stage, the better chance she has – with that in mind, Stages 4 and 5 are her best bet to gain time.

The first two flatter stages 1 and 2 should come down to a sprint. Stages 3 and 6 could also end up being a sprint depending on how they play out. Coryn Rivera won last year’s race and after a spell of poor form in April, seems to have turned things around. She sprinted to 2nd and 3rd at the Thuringen Tour last week after a quiet Tour of California and a streak of DNFs. Boels’ Jolien D’Hoore finished 3rd behind Rivera in one of those stages. She also won a stage at Emakumeen Bira at the end of May. A strong sprinter, she’s won 3 Women’s Tour stages in previous years.

Mitchelton-Scott’s Gracie Elvin has been sprinting consistently well in 2019, just without a win. So far she’s racked up 8 top-10s. She was 4th at the recent La Classique Morbihan to show that good form is continuing. The short uphill finish at that race is a good test for Stage 4 here too. Movistar’s Sheyla Gutierrez was 3rd at the Grand Prix de Plumelec-Morbihan (the name is similar but it’s a different race to La Classique Morbihan) on 1st June. She also managed 4th in 2 stages of the Emakumeen Bira too. She’s a rider with a lot of form at the moment.

TIBCO’s Alison Jackson finished 9th at Amstel Gold this season and then 3rd in the first day at the Tour de Yorkshire. A strong sprinter, her finish at Amstel Gold shows she can also do the puncheur thing too. I’ll be surprised if she doesn’t get a top-10 during the Women’s Tour. Canyon-SRAM in their special new red jersey has Elena Cecchini to sprint for them. Cecchini won a stage at the recent Thuringen Tour on her way to 8th Overall. That stage was her first win of the season but she’s had plenty of top-10s all season. She had a particularly good Spring classics and those results could be an indicator of a high finish in the Women’s Tour.