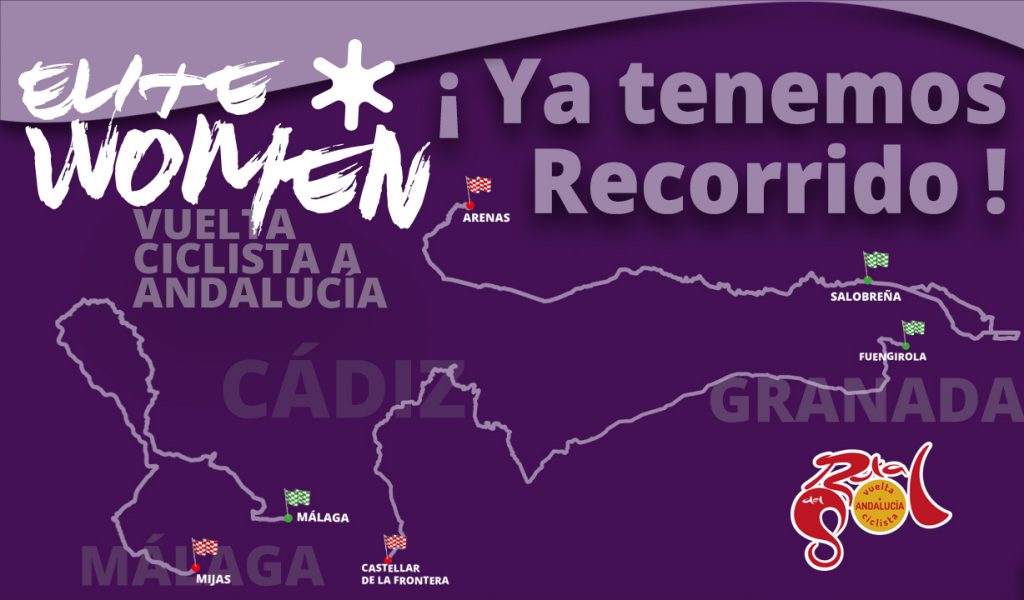 The first edition of the Elite Woman Cycling Tour will have three stages and will include the participation of the best of the international women’s squads.

Deporinter has announced the route of the three stages that will include the premiere of the women’s Cycling Tour of Andalusia for elite professionals that will take place between May 3rd and May 5th 2022. The race will be three stages over approximately 358 kilometres, with six scoring points along the route. The three stages will run through the provinces of Malaga, Cádiz and Granada. It is the first and only event of the highest level of women’s cycling in the Andalusia region.

The first stage will run along roads in the provinces of Granada and Malaga. It will have 105.5 kilometres, starting from Salobreña and ending in the Axárquico municipality of Arenas. The start will be given at 12:30 noon, with steps through Carchuna, Calahonda, Motril, Almuñécar, La Herradura. Already in the province of Malaga, through the municipalities of Nerja, Torrox, Algarrobo, Vélez-Málaga and final in Arenas. The day will feature two mountain passes; one of the third category, that of La trench, and the decisive port of Arenas, which will be crowned less than a kilometre from the finish line.

The second stage will begin in the capital of Malaga in the area of ​​the athletics stadium and will end in Mijas. It will be 118 kilometers that will run along the Costa del Sol visiting the towns of Alhaurín de la torre, Estación de Cártama, Pizarra, Álora and Coín. The day will have two scoring points, the first of them the second category climb, the Alto de la Mesa and the Puerto de la Mar located two kilometres from the finish line.

The final stage will start from the town of Fuengirola and will take riders to the town of Castellar de la Frontera in the province of Cádiz. It will be almost 139 kilometers crossing the entire western part of the Costa del Sol passing through Mijas, Marbella, Estepona, Casares and Gaucín. That day will also feature two mountain passes, Puerto de la Cruz and Hacho de Gaucín.

The Ruta del Sol Elite Women has the endorsement and experience of Deporinter, the organising company of the Vuelta Ciclista Andalucía Ruta del Sol, which in 2022 celebrated its 68th edition in the men’s category. In this way, Deporinter will place Andalusia on the national and international sports scene through women’s cycling. At the same time, it will publicise the local areas of the departure and arrival municipalities of each stage. The race will be able to be followed on TV in more than 70 countries.