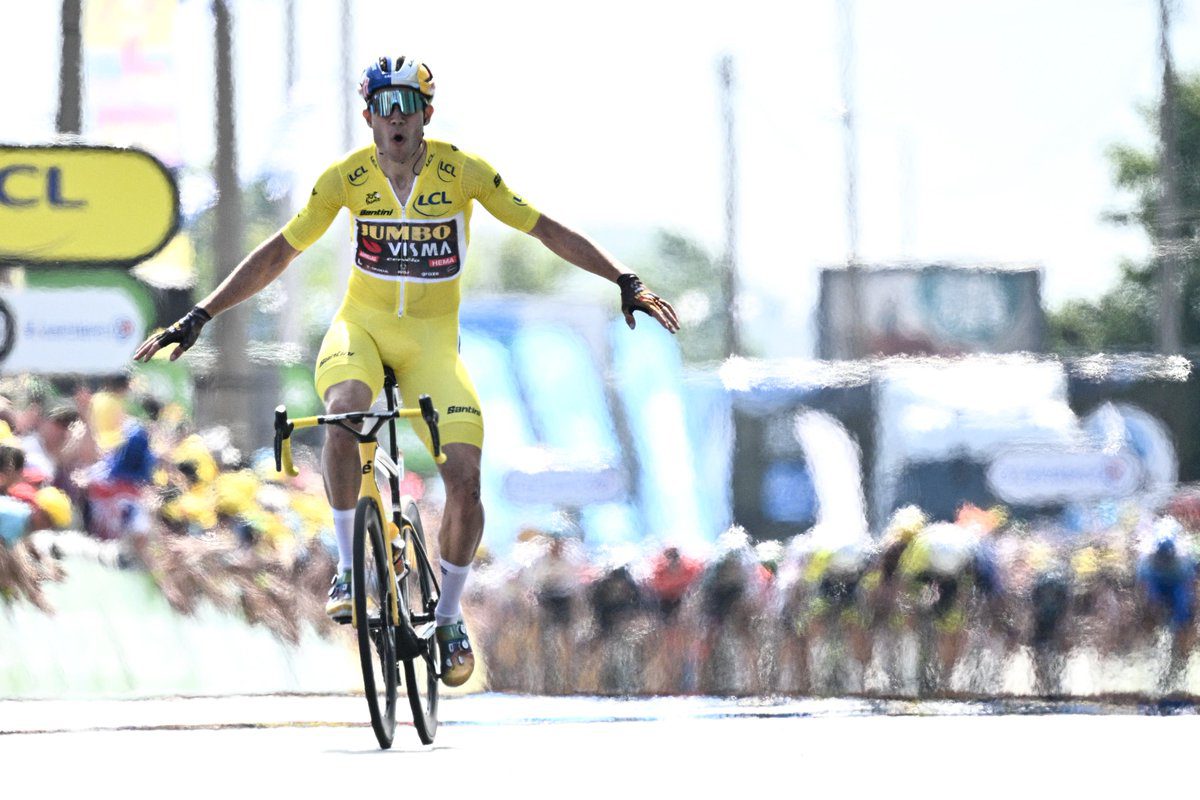 Stage 4’s start and finish towns are well known to English holiday makers. Chances are almost every Brit will have been through either of them on the ferry to mainland Europe. It was Wout van Aert who made sure he enjoyed the trip to Calais.

Wearing the yellow jersey, Wout van Aert attacked and extended his lead by finally winning a stage of this year’s Tour de France after 3 days of finishing in 2nd place. The climb of Cote du Cap Blanc Nez was a short, steep affair and Jumbo Visma chose that moment to try and blow the race apart. Their acceleration blew apart the peloton and riders couldn’t live with the pace. Geraint Thomas briefly looked like he might before falling back and Adam Yates of Ineos Grenadiers was the only rider to sustain the pace until almost the summit. Once he dropped back Wout van Aert was all alone at the summit.

“Usually it’s third time lucky, but it was fourth time for me but that’s also good, it’s outstanding because these stages usually end in a bunch sprint, it’s almost impossible to win solo.”

The win was Wout van Aert’s 7th at the Tour de France and meant at least one more day in the yellow jersey. The gap to his teammate in 2nd, Yves Lampaert, is now 25 seconds with Tadej Pogacar 32 seconds back. Behind him, Jasper Philipsen took second place and celebrated in a way that suggested he had thought he’d won. After beating his rivals in the sprint, he bumped his chest to celebrate only for Christophe Laporte to point out Van Aert was already ahead.

“I had the feeling I had won for about two or three seconds, it just shows how strong Van Aert is, to be able to hold off a whole peloton like this is quite something. I didn’t think anyone was capable of it. They were laughing behind me.”

Earlier in the stage, Anthony Perez and Magnus Cort Nielsen formed the breakaway and whilst they had a decent lead, it never looked like being allowed to take the stage. Cort Nielsen continued his assault on the polka dot jersey, he now has 11 points out of a possible in this year’s Tour de France.

The sprinters’ teams upped the pace midway through the stage and the leading duo’s seven-minute advantage started to melt.

Cort Nielsen sat up after taking the KoM points of the day and whilst Perez pushed on alone, Jumbo Visma’s attack pulled in the break.

Wednesday’s fifth stage is a gruelling 155-km ride from Lille to Arenberg featuring almost 20km of cobbled roads – the same used on the Paris-Roubaix classic, also known as the ‘Hell of the North’.

The top contenders will be looking to avoid trouble on tricky terrain that favours the heavier riders and Van Aert will again be one of the favourites. There will be an interesting dynamic about whether he will be able to push for another stage win or have to work for Roglic and Vingegaard.