So what is Zwift? Well, traditionally Winter cycling saw people putting on layer after layer, braving the cold and wet on a club ride or having to resort to riding indoors on a turbo trainer. The latter was always dull, staring at the four walls out of your mind bored. Some people found relief in watching films whilst riding, I generally had to resort to playing the Xbox. By distracting my brain from clock watching by playing Fifa (driving games didn’t work very well, it’s hard to fight the urge to lean into the corners). Around two years ago Zwift was created to fill in that gap and make indoor training much more interesting.

Anyone with a bike, a turbo trainer (£100+), a couple of sensors (£50), an ANT+ stick (£10) and a PC can get going. As you ride, Zwift calculates your power in watts and converts that to a speed in-game as you zoom around a couple of virtual worlds. Most people will start off with a solo workout or two before exploring the world of group rides and Zwift racing.

A number of pros can be found riding as well, the likes of Jens Voigt, Michal Kwiatkowski, Laurens Ten Dam, Michael Matthews, Edvald Boasson Hagen, Andre Greipel, Thomas de Gendt, Jasper Stuyven, Fumy Beppu and Axel Merckx. I suppose you could play the likes of FIFA and Madden with/against some pros but they’re less upfront about it. On Zwift real names are used and you can even get a notification to your phone if someone you like starts riding.

Zwift works well because of the social aspect. Whilst you can be a hermit and simply ride on a workout passing everyone by with no interaction, the most fun is had on group rides. The well led ones are kept to a reasonable manageable speed. Somewhere between too easy and too difficult where conversation (typing in this case) is possible whilst riding and the chat helps the time spend riding fly by. Facebook groups help established groups get closer and before you know it, you’re fully involved in the Zwift community. A new set of people are asking where you were on Sunday and encouraging you to beat personal bests and improve that FTP (functional threshold power).

As a relatively new convert to racing on Zwift I’ve realised I’ve now found the tip of the iceberg. This stuff is serious.
Anyone who hasn’t forked out for a power meter is looked down upon and so is not racing with a heart rate monitor. The efforts required to finish high up are huge, in my last two races I’ve had to lie down straight away afterwards because I’ve put myself into the red so much. A sign of good training! As in real-life, racing is split into categories, this effectively means that in the middle of a mass race you can ignore those marked with an A because they’ll be disappearing into the distance shortly. It also gives newbies a chance to race against each other in the starter D category rather than feeling like they’re being thrown straight into the masses.

My first race was on the Richmond 2014 World Championship circuit. I managed to lose all of the groups and spent nearly the whole thing on my own. Guaranteed to be the slowest way to race, with no draft effect to help the speed. I had put myself in the D category as a beginner but the power I put out meant I got upgraded to 10th (of 11) in the C category. The auto-upgrade prevents people from under-representing themselves and winning categories they’re too good for.

I had another go a few weeks later and whilst it was hard work it was much improved. I finished 4th in C category after getting myself into one of the leading groups and then gradually falling backwards as I lost contact with my group on the last lap. Despite that, what was most memorable after this race was Zwift crashing and my PC refusing to reboot. After reinstalling Windows I lost all the data and couldn’t upload it to Strava either. Far from ideal.

The last two weeks I’ve been back on it cycling wise and have done 4 races. Two results of 13 and 19 in the B category, and two more of 2 and 8 in the C category. It’s fair to say that I’m somewhere between the B and C categories and that the race circuits heavily impact what I can do. The circuit in London is a favourite, it’s relatively flat with only a blast up Whitehall to Trafalgar Square that causes brief issues. Unsurprisingly this is where I’ve done my B races.

I seem to have hit on a strategy of going as fast as I can early on, hanging onto the quickest group for as long as possible and then seeing who I can hold off until the end. Hanging onto the back of a quick group early on does give you huge leads over chasing groups, I just need some more fitness to hang on until the end! It’s been this week where I’ve found out about the work that Nathan Guerra (a top American MTB-er) who has a Youtube channel that broadcasts Zwift races live as he provides commentary.

It’s been useful to be able to re-watch the races and see at which point I should’ve done something better or been more active at a crucial point. It also helps me get better screenshots!

As a means of indoor training, for me, Zwift has made it something worthwhile and actually enjoyable to do. It saves me having to go out into the city to train on dark, wet, cold evenings so I could probably claim some safety advantages to using it as well. Especially because you can’t crash on Zwift unless you’re particularly careless and fall off your bike somehow. Having group rides and races means that you can choose what sort of ride you want to do, whilst managing to have that social aspect.

Being able to race against other actual people makes it that extra bit real and allows the competitive side to come out. It pushes you far more than a winter club ride or than you would do a workout on your own. By doing more than just riding long rides and doing specific training rides and races, the data has shown that I’ve made improvements despite riding less in the last two months – my FTP is now around 45 watts higher than it was when I first started on Zwift 3 months ago. For me, being able to play on Zwift and ride regularly has definitely been a worthwhile investment. 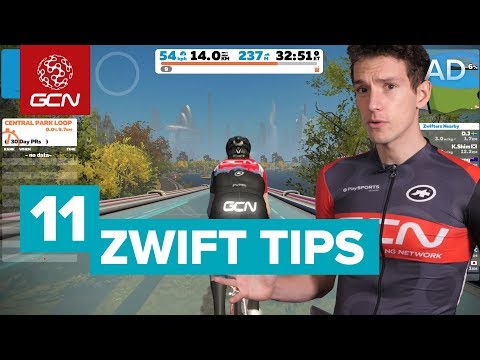 11 Things I Wish I'd Known About Zwift

There are so many features on Zwift, are you sure you know the best ones? If you're new to Zwift or a seasoned veteran, here are 11 things you wished you'd ...