The coastal course in Oostende will be a unique, and brutal, challenge

The best riders in cyclocross are descending upon Oostende for the 2021 UCI World Championships. None of them will have seen anything this season quite like the challenge they’ll face this weekend, when they’ll combat sand, tide and 21% gradients in hopes of wearing the rainbow jersey.

A momentum-sapping 565-metre loop of sand and sandy surface highlights the 2,900-metre course, where Baloise Trek riders like Lucinda Brand and Toon Aerts will have to throw down massive power to pull away from the pack. Aerts, at least, isn’t unfamiliar with the course: In 2017, he raced Oostende in the Belgian National Championships and took fifth.

The 2021 course looks similar, but features a few key differences that make it even trickier than it was four years prior. Let’s walk through the course together, using images from 2017 to get a sense of what Saturday and Sunday will look like. 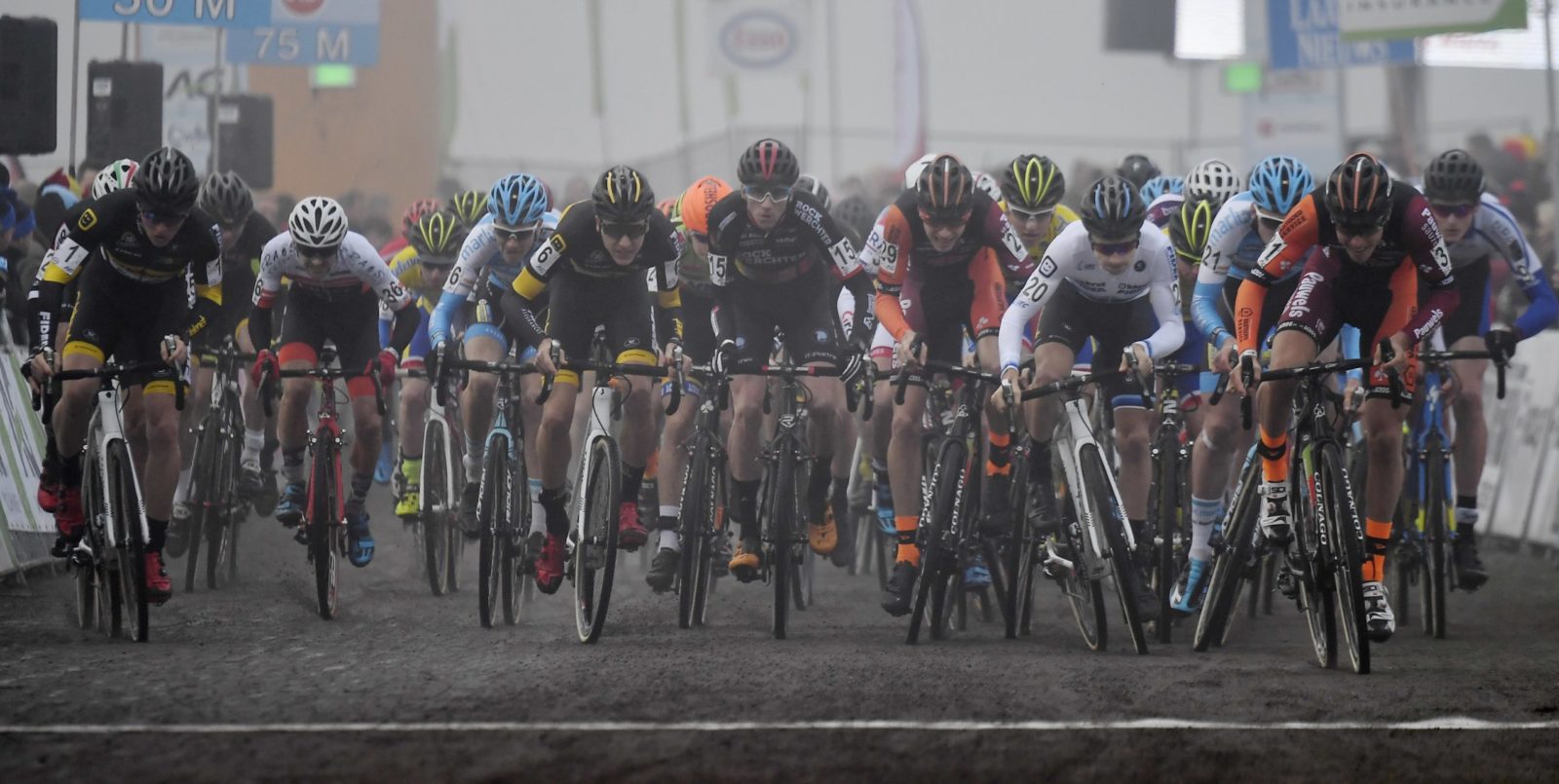 The start of the 2017 U23 men’s Belgian national championship.

The race will begin on a wide and relatively innocuous stretch of cinder track. Riders shouldn’t have too much trouble negotiating space at the start, though a 180-degree bend onto grass could lead to some jostling.

Here’s what the course looks like courtesy, the race’s official site:

If riders navigate the hairpin successfully, they should be unbothered until they reach a bridge spanning a highway. The first ascent is only 35 metres, but it is a consistent 21% gradient. If riders want to separate themselves early, they may do so here. 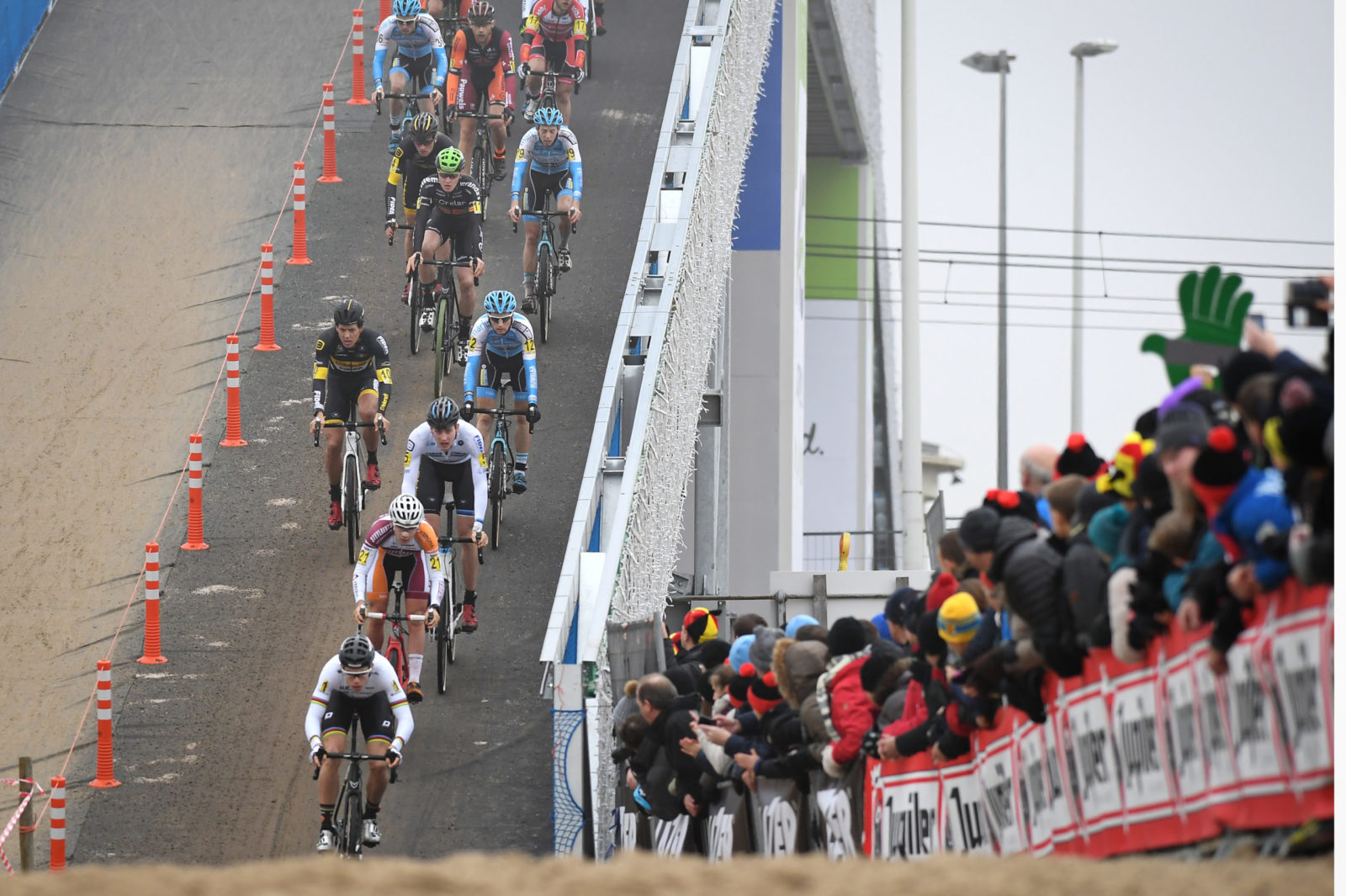 Riders descending onto the beach side of 2017 Belgian National Championships course. 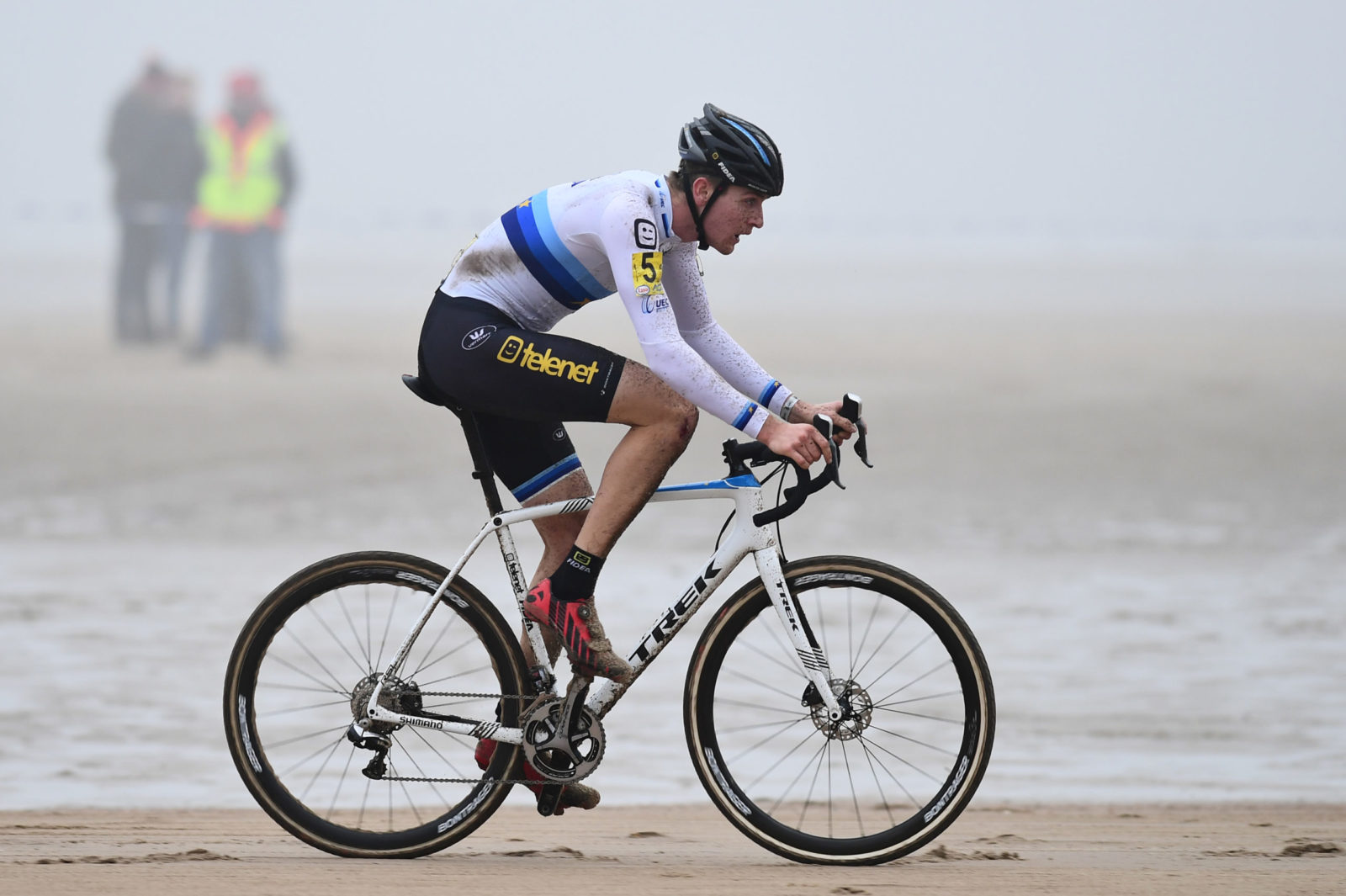 Toon Aerts riding along the tide.

The descent from the bridge will be screamingly fast as riders go down at a 21% gradient. That speed will only be brief help in the sand, where tires will sink and force riders to muscle their way across the beach.

Coming off the bridge, riders will have an important decision to make: they can take a shorter path along the barriers through the less densely-packed sand, or veer towards the tide where the surface is much faster. The bit of strategy is unique for a cyclocross race, and will force riders to take into account, of all things, the tide and time of day.

High tide will take place at 2:51 p.m. local on Saturday, roughly 20 minutes before the elite women’s race starts, and 3:31 p.m. local on Sunday, roughly 20 minutes after the men’s race starts. As the water ebbs in and out, it will affect the path the riders take, as will the weather. Both days are expected to receive stiff headwinds across the beach. On Saturday, the women are forecasted to contend with precipitation, potentially snow.

Getting to the end of the beach won’t feel like much of a relief. After all, riders will have to come back on the sand to take on the bridge again. In 2017, riders essentially rode back the way they came, which would be bad enough. In 2021, organisers decided to make the return trip even harder. 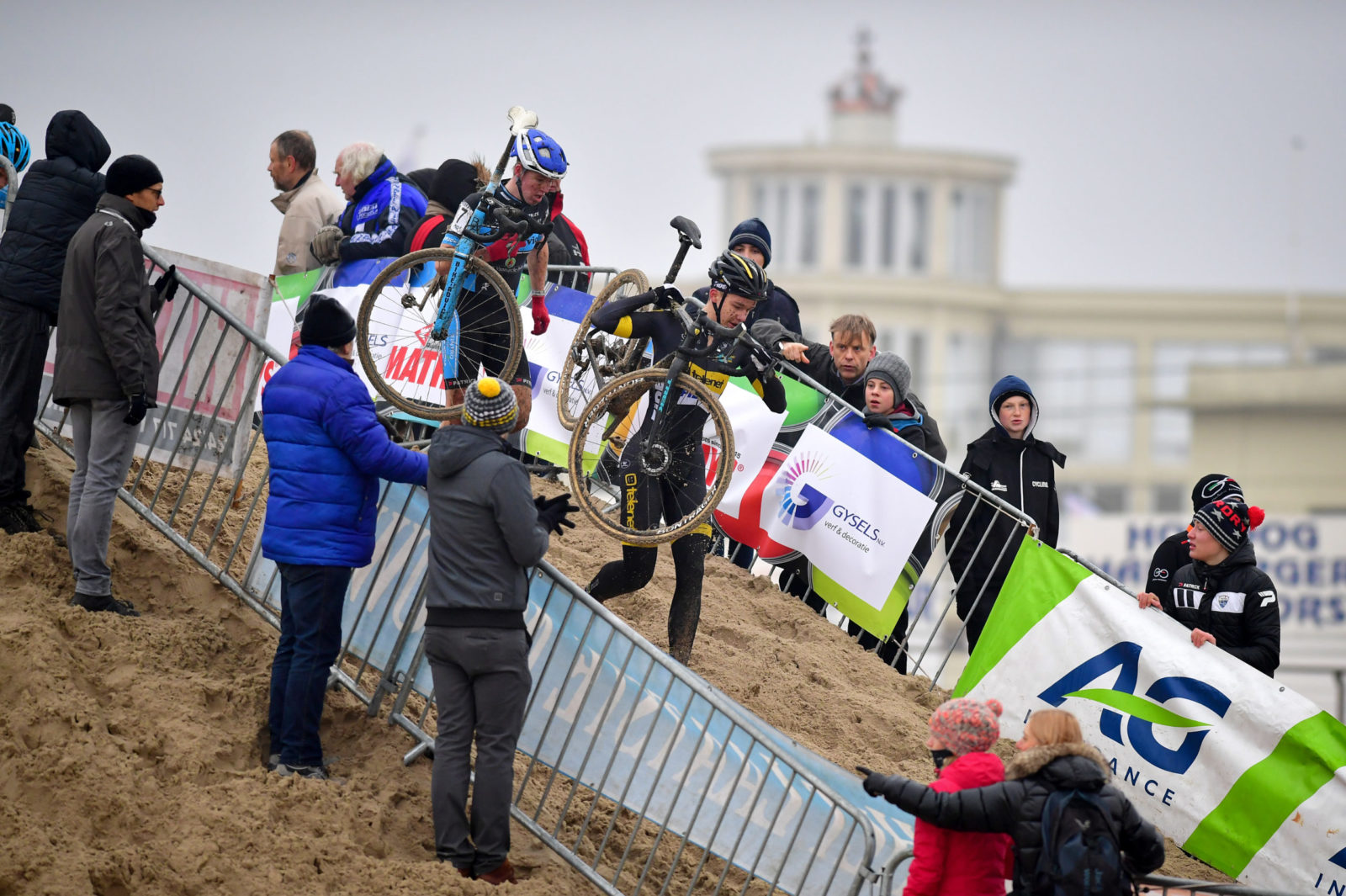 Riders forced to schlep their bikes in Oostende. 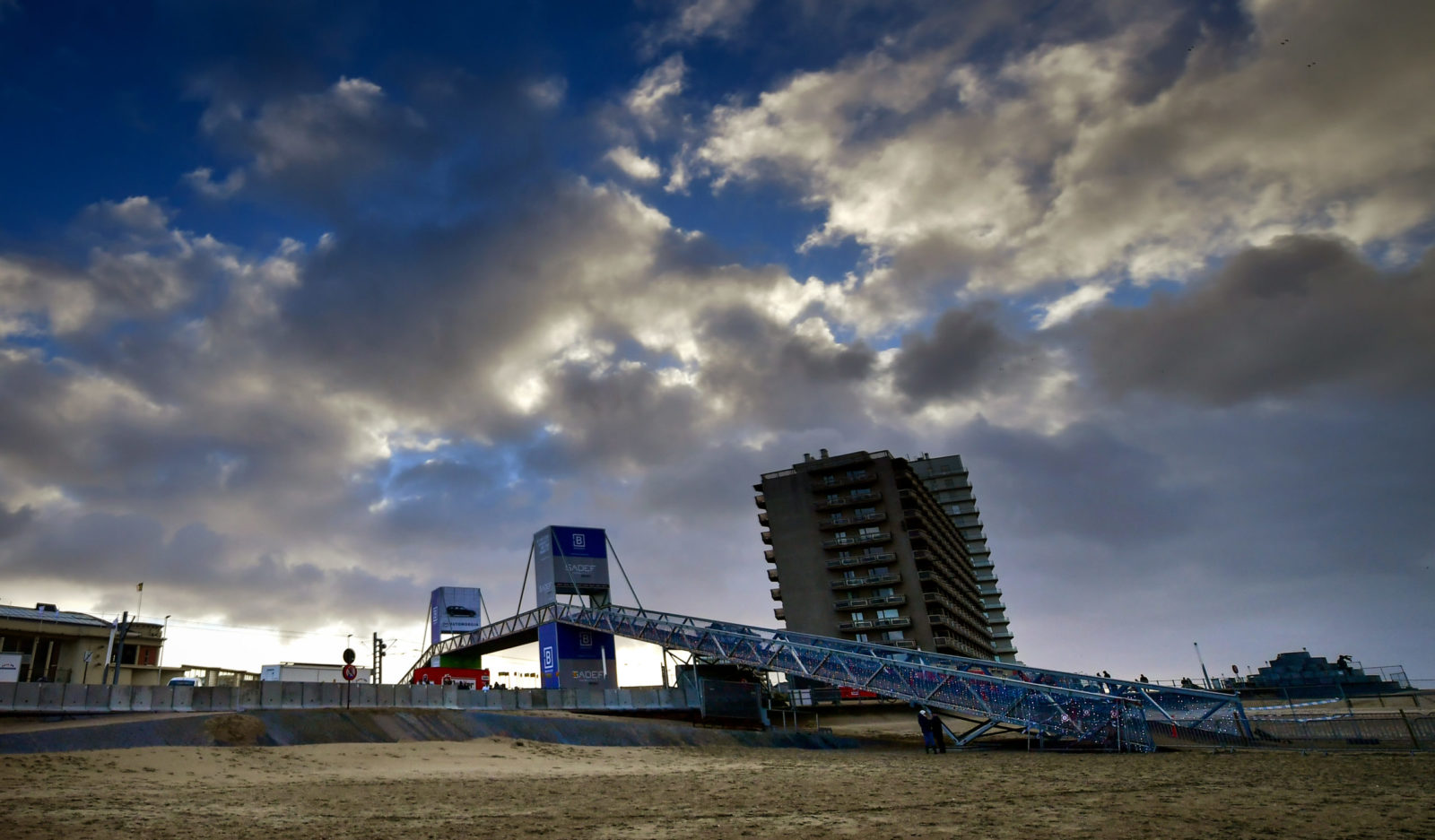 The approach to the bridge from the sand.

To head back to the bridge, riders will first turn East and make their way towards a pedestrian promenade. That means that even the riders who rode close to the tide will be forced to take on loose sand, going up a moderate slope no less. Expect riders to hop off their bikes and run this section.

The promenade is one of the few paved stretches of the course, and should give riders some short-lived reprieve. Then it’s back to the sand, potentially forcing riders off their bikes once more.

Even if some riders are able to keep pedalling, they won’t have much speed heading into the bridge. There, they will have to ascend the 21% gradient they descended shortly before, and climb for 20 metres more — 55, not 35 — than their first ascent.

That climb could come to define the race, forcing riders into their physical and mental reserves after nearly 600 metres of hammering through sand. 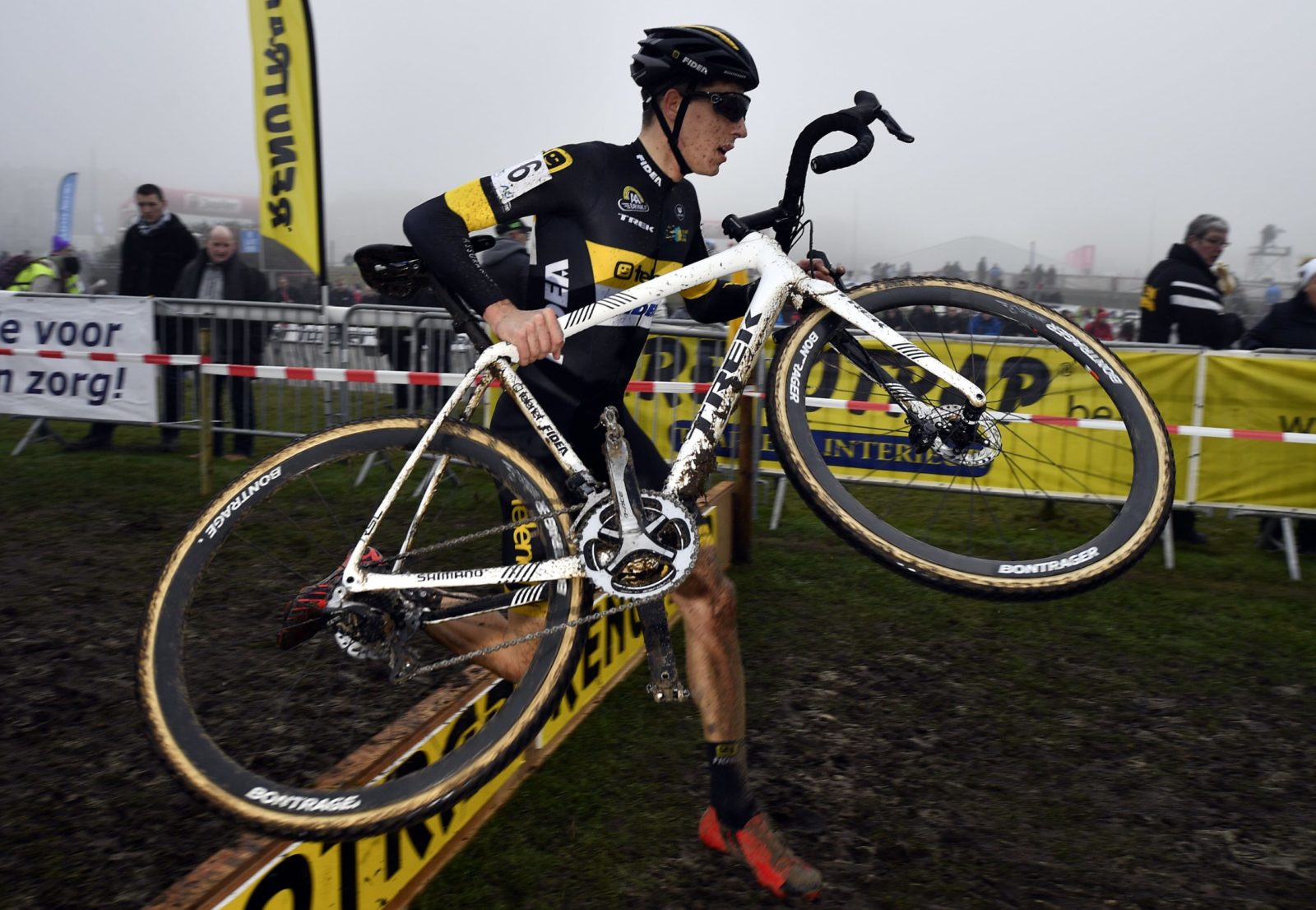 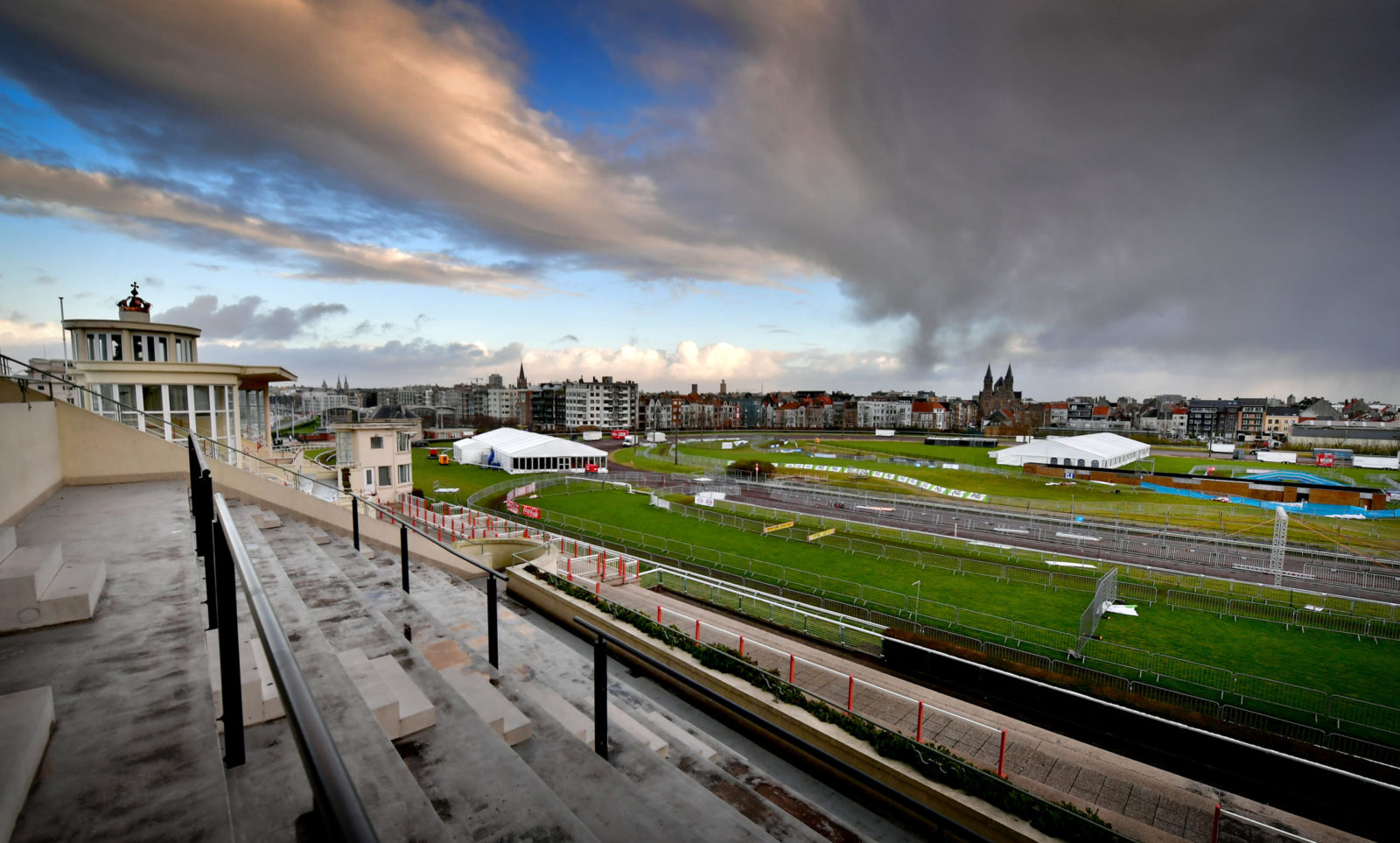 A view of the hippodrome

Riders will be in mighty pain once they make it to the top of the bridge. The good news is that the rest of the course isn’t nearly as taxing.

That’s not to say it’s easy, however. Most of the course takes place on the starting line side of the bridge, primarily on grass that will become mud if rain falls. But the tricky corners and stairs section will at least feel familiar for elite-level cyclocrossers. The course remains relatively wide throughout, making passes less of a concern.

The course ends with a long straightaway back onto the cinder surface. After several gruelling laps, both elite races could come down to a sprint into a headwind. It would be a cruel finale, but then, the course designers clearly never had the riders’ comfort in mind.

Instead, fans will get a chock-full weekend of racing with seemingly limitless possibilities. What more could anyone hope for?