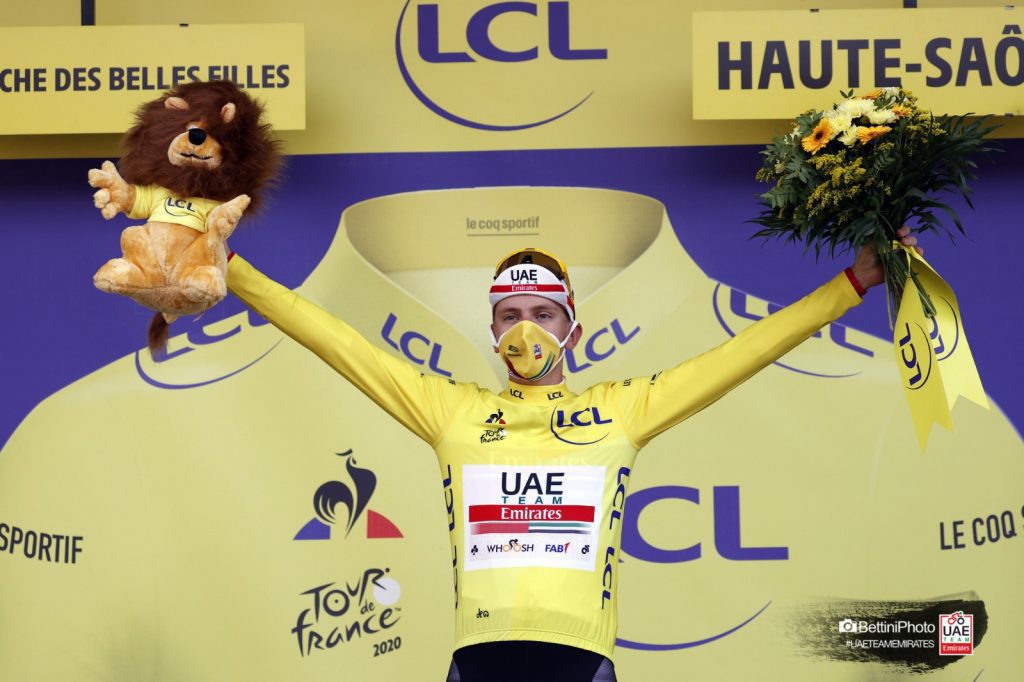 The 2021 Tour de France looks to be one of the most hotly contested editions of the race for years. There are a few Tour de France favourites, especially after the dominance of Ineos Grenadiers was finally broken last year. UAE’s Tadej Pogačar and Jumbo-Visma’s Primož Roglič once again present the greatest challenge to a return to the top step for Ineos. It doesn’t bode too well for French hopes with Julian Alaphilippe not a natural contender and probably unable to beat Pogačar and Roglič.

Last year’s astonishing Tour de France winner in just his second season at the highest level of cycling. Pogacar took yellow in the penultimate stage, overturning a deficit of close to a minute to compatriot Roglič. He stayed out of trouble on the final ceremonial stage into Paris and became the youngest Tour de France winner since Henri Cornet won the 1904 race. Pogacar was the first rider to win 3 jerseys in a single Tour since Eddy Merckx did it in 1972 and joined a select group of 7 other riders in winning their first edition of the Tour de France.

Tadej Pogačar’s form in 2021 is certainly encouraging to the idea that he’ll retain his title. He’s won Tirreno Adriatico and an impressive first monument at Liège–Bastogne–Liège too. That result and 7th at Strade Bianche feels like he’s matching Roglič in being a Grand Tour contender in the old-school Hinault vein. There’s no reason to think that Pogačar won’t be contesting the victory.

The photos of Roglič struggling up Les Planche des Belles Filles, his time trial helmet askew were of a generation defining moment. Cycling fans watched dumbfounded as he lost nearly 2 minutes to his countryman and nearest rival. Once the dust settled, Roglič sought to dispel the unfortunate end to 2020’s Tour de France. Thanks to the odd calendar because of COVID, he was able to take the win in a memorable sprint at Liège–Bastogne–Liège after the Tour. This proved to be a useful warmup for the final Grand Tour of the season. Where despite being pushed hard, Roglič made sure to win the Vuelta a Espana for the 2nd season in a row.

The 2021 season has been largely positive, with some notable exceptions. The Tour of the Basque Country was dominated by Roglič as he took the mountains and points jerseys as well as the overall victory. 2nd at Flèche Wallonne, where Alaphilippe overtook him late on, was a good effort as well. Paris Nice looked encouraging, with 3 stage wins and the race seemingly in the bag, before a crash on the final stage. The peloton wasn’t kind and Roglič was left cut adrift by the race and dropped to 15th overall. It’s an unlucky sign that last-minute capitulations aren’t quite out of the repertoire yet.

The 2018 Tour de France winner took his chance that year and followed it up in fine fashion by finishing 2nd in 2019 behind teammate Egan Bernal. A surprising late drop from the 2020 Tour de France team, the bad luck that seems to follow Geraint Thomas is never too far away. He rode over a loose bottle early on in the 2020 Giro d’Italia which caused him to crash. Despite his efforts to keep riding, he was too injured. It brought back memories of the 2017 Giro d’Italia where Thomas crashed into a parked motorcycle which took him out of the race. A crash in that year’s Tour de France also took him out with a broken collarbone. In both races he was high in the general classification in 2nd place.

Geraint’s form in 2021 appears to be better than at this point in 2020. He won the Tour de Romandie and finished 3rd in the Volta a Catalunya behind teammates Yates and Porte. As one of the 3 Ineos Grenadiers on this list, Thomas may need to fight for superiority and the right to lead the team. Staying out of trouble is clearly a big goal and if he can avoid any issues, he should be a solid contender although maybe not quite on the same level as the Slovenian pair.

Carapaz came close to taking his second Grand Tour victory in the Vuelta a Espana last season, ultimately finishing 2nd to Roglič. The winner of the 2019 Giro d’Italia will be teetering on that line of super-domestique but could find himself the strongest rider on the Ineos Grenadiers team. It would only take one piece of bad fortune for Geraint Thomas, which we know from experience can happen, for Richard Carapaz to be thrust into the outright leadership role.

It’s been a fairly quiet start to the season for Carapaz, who’s aiming for the Tour/Vuelta double again in 2021. He has said though that the Tour de France is his main objective for the season. 9th at Fleche Wallonne is his best result so far, although the Tour de Suisse is currently ongoing. It remains to be seen what form he’s really in when the racing heats up in the proper mountains.

Any French hopes for success lie with Julian Alaphilippe. The winner of the mountains jersey in 2018 surprised most of us by finishing 5th in 2019’s race. Despite taking an early stage win in 2020’s race and the yellow jersey with it, Alaphilippe couldn’t recreate the GC success from the previous year and finished 36th. It remains to be seen if the 2019 result was a Voeckler-esque one-off or if Alaphilippe can return to the top-10 in a Grand Tour.

Form-wise, Alaphilippe appears to be doing well in 2021. A stage win at Tirenno Adriatico and a customary win in the Ardennes at Fleche Wallonne. Plus 2nds at Liège–Bastogne–Liège, Strade Bianche and 2nd Overall at the Tour de Provence at the start of 2021. The question marks will always be about the high mountain stages and how much time he will lose there to the natural climbers. He pulled off the TT of his life to stay in yellow during 2019’s race so that might not be a natural hinderance either.

It almost feels strange that Porte is considered one of the Tour de France favourites this year. Porte finally reached the podium in last year’s race for Trek Segafredo. However, part of his consideration in moving back to Team Ineos was that he wouldn’t be taking up GC leadership. Porte left Team Sky (as was) at the end of 2015 and finished 5th in the 2016 Tour de France. 2 years of crashing out of the race followed, before finishing 11th in 2019 and that podium last season. Porte has only done a single Vuelta in that timeframe as the Tour has always been the target race.

Porte ends up with decent odds and on this list though because of his stunning one-week stage race form in 2021. He won the Criterium Dauphine last week, which really shortened his odds. That result came off the back of recent 2nd places in both the Volta Catalunya and the Tour de Romandie. The issue with assigning too much weight to these results is that Porte knows his role and his specialisms. So whilst he’ll be a presence in the race, it should just be in helping Thomas and Carapaz.

It says a lot about the strength in depth of the Ineos Grenadiers team that Tao Geoghegan Hart appears here as the 4th member. Tao is another former grand tour winner in the line-up here. He won the 2020 Giro by beating Jai Hindley in the final TT on the last day. There were criticisms that the startlist wasn’t of the highest quality mind. But once thrust into the GC leader role by the misfortune of Geraint Thomas, he certainly took his chance. You’d have to think that the pathway to a win here is too muddied by other members on the team though.

Hart’s form in 2021 is good though. He took an early top 10 on GC at Haut Var, before finishing 10th again at the Criterium Dauphine last week. He also took a 2nd place in a stage which might show where his best results could come from in this year’s Tour de France. That all depends on whether Ineos go back to their defensive mountain trains or continue to attack as they did in last year’s Giro d’Italia.