Through her three teammates’ solidarity, Audrey Cordon-Ragot only had to focus on one big effort at the end and rewarded her teammates in the best way.

The Trek-Segafredo team numbers only four at the Tour Cycliste Féminin International de l’Ardèche, but good things happen when each teammate throws everything into working for one goal.

With arguably the best tactical support from team director and renowned sprinter Ina Teutenberg in the team car behind, and thanks to the work of motivated, selfless teammates, Cordon-Ragot out-witted faster legs to take the win in Avignon.

The seven-day race has no live television coverage or updates, so we caught up with recently crowned French National Champion to find out what happened. “What happened is that we fricking rode it as a fricking strong team – unbelievable with four riders!” exclaimed Cordon-Ragot.

She did elaborate on that:

There was a breakaway with a bit more than two minutes with 30kms to go, so we decided to take the race in our hands and Lauretta (Hanson) and Shirin (van Anrooij) riding hard on the front and some teams like Canyon and Movistar starting to help work as well.

With 15kms to go, we brought the breakaway back. Lauretta then continued to pull to make sure that Trixi and myself were in good position as the final was really tricky.  There was a tricky downhill into a climb with four kilometers to go, so we wanted to be in front here.

I think I stayed in Trixi’s wheel for 50kms without moving a finger, just following her in the bunch; it was so easy.  She dropped me off at the bottom of the last climb, and I just did it full gas, with Shirin also taking over and pushing really hard. We made the real sprinters quite fatigued and not fresh for the finish.

After the climb was 1.5kms of tricky downhill with a lot of road furniture, so I made sure to stay at the front following the fast sprinters, and then in the last 500 meters, I just did my full sprint just before the final last righthand corner. From there, it was 200m to go. Ina said in the radio, ‘you have to do the sprint before the sprint to make sure you are first position in those last corners.’ It’s what I did, and I won.

We planned everything right from 50kms to go, and everything went perfectly. On days like this, you cannot explain why it worked – you come here with a team of four, one a Junior who has never ridden at this level, and the team just gave everything.  Even Trixi was like,’ What did we just do today!?'”

I have to say thank you to the girls. It was a team win; I just finished it off. We really did this all together. We are going to celebrate with good wine from the region tonight! 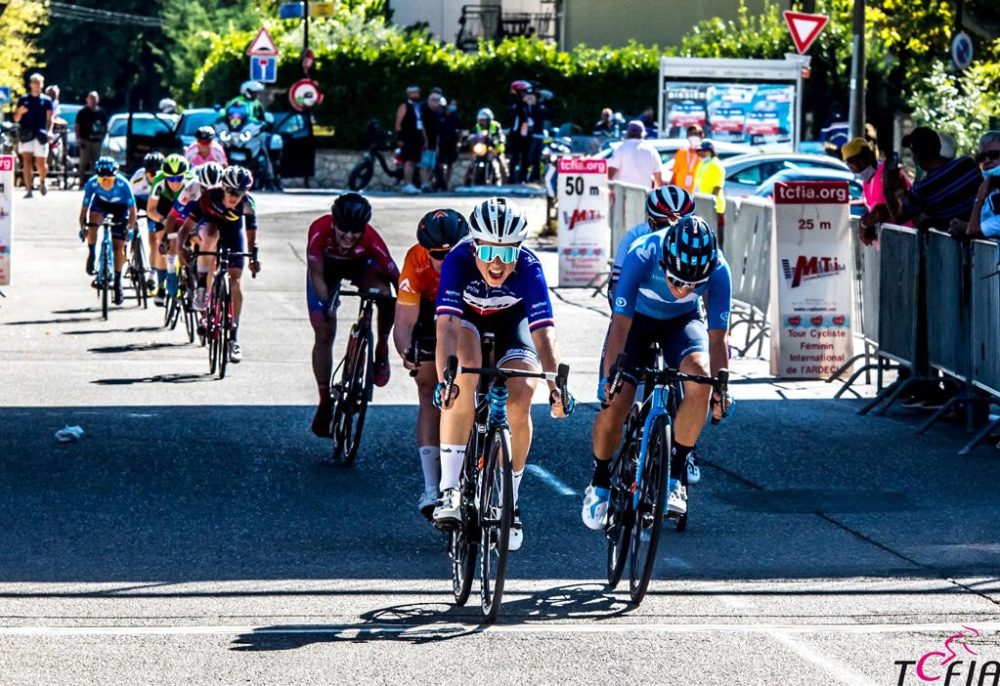 Director Ina Teutenberg, not one to mince words, agreed, “The team did an awesome job. They closed the gap to a breakaway of two minutes. Lauretta and Shirin did most of the work there, and then Trixi looked after Audrey in the end and put her in the best position.

“Audrey just finished it off in the sprint. So it was very beautiful. Beautiful teamwork.”