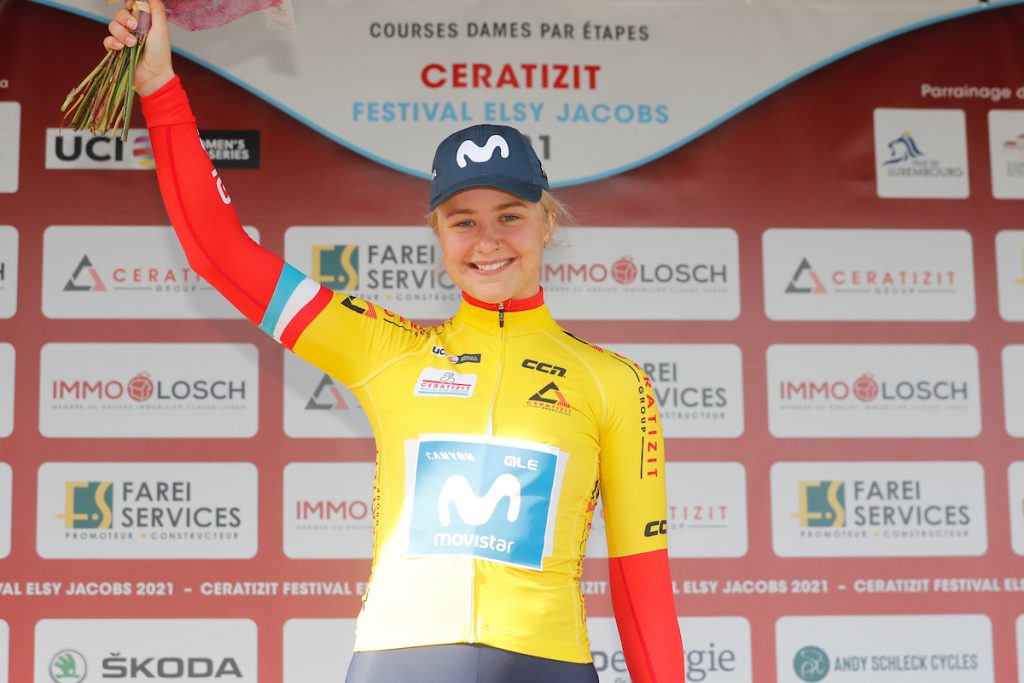 The Ceratizit Festival Elsy Jacobs is named after the 1958 World Champion from Luxembourg. One of the original stars of women’s cycling, Elsy Jacobs was also the holder of the hour record from 1958 to 1972. The race was held for the first time in 2008, on the 10th anniversary of her death. Initially a one-day race, it expanded to a stage race in 2012.

It’s not a surprise that Marianne Vos dominated the early editions with 3 victories in a row and only just missing out on a 4th win in 2014 when she finished 2nd to Anna van der Breggen. Van der Breggen retained her title in 2015 before Pole Kasia Niewiadoma won the following year. There was a popular home victory for Luxembourger Christine Majerus in 2017 and she was just 1 second away from winning again in 2018. Lisa Brennauer claimed victory in 2019 by winning the last stage, with the bonus seconds taking her past Demi Vollering for top spot. We saw Lorena Wiebes win the prologue last season but then it was Emma Norsgaard’s race. She won both of the other two stages to win the GC by 14 seconds.

The race often comes down to small time gaps, with the prologue shaking up the GC to begin in and then tough stages see either a sprint or small breaks. We haven’t seen a GC winning margin of more than 15 seconds since 2016. It’s a genuine prologue, only 2.2km this year so it won’t decide the race completely. It will influence what comes after it though, with attacking racing from those who need to claim back some seconds in GC.

The weather conditions look good this weekend. The prologue will be largely a tailwind, further closing the time gaps. It’s going to be a headwind on the opening part of the final lap of Stage 1 and the wind will get up too. The riders will then turn around and get the speed up heading back to Steinfort for the finish. It’s a similar story for Stage 2 with a tailwind helping the peloton until late on where the parcours turns and the rider will have the wind in their faces at the finish. 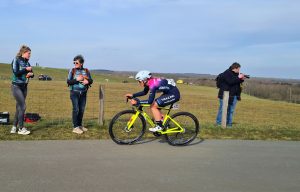 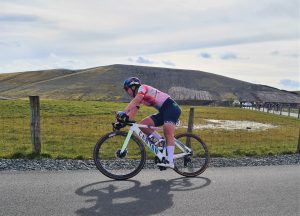 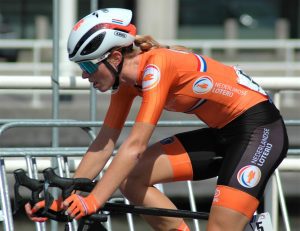 Demi Vollering certainly didn’t have a bad classics season but it was so close to being so much more too. 5 podiums but only 1 victory kinda tells the story. The solo win at Brabantse Pijl looked encouraging for the Ardennes but Vollering would’ve wanted more than 3rd place at both Fleche Wallonne and Liege-Bastogne-Liege, even if those would be great results for others. Vollering has done well at the Ceratizit Festival Elsy Jacobs before, finishing 2nd in 2019 whilst still at Parkhotel Valkenburg. She won the prologue that year but Lisa Brennauer won the overall by winning the last stage. You assume Demi Vollering would be the leader but you can’t rule out 2017 winner and local Luxembourger Christine Majerus. She’s been an elite domestique all spring, usually finishing in the top-25 whilst other teammates get their turn to shine. On one of the few occasions to shine herself, Majerus won the Drentse Acht and she’ll be champing at the bit here.

Katie Archibald was impressive at the start of March, finishing 4th at Bloeizone Fryslan. That was off the back of a strong showing in the opening time trial and managing to not lose any time before the end of the race. There may possibly be too much climbing here for Archibald to really do well in but with a flat TT to open, she should start the GC in a strong position. That can often be a good motivator to push over some of the tougher climber and Archibald could make the top-10.

It’s a similar story for Lisa Klein. She also had a strong showing at the Bloeizone Fryslan, turning 5th in the opening time trial into 6th on GC. Other than that, it’s been a quiet season for Klein so far. She’s done a few of the spring classics but clearly there are other targets this season. The Ceratizit Festival Elsy Jacobs could be one, with the time trial and then rolling parcours suiting her skillset. Klein has been 4th and 5th here in the past. The #1 bib goes with Alice Barnes and she’s got a decent shot as well. She was riding particularly well at the start of March where she finished 8th at Le Samyn, 5th at Bloeizone Fryslan and 6th at Ronde van Drenthe. This race should suit her with the time trial at the start and then lumpy stages that should end in reduced sprints.

You have to fancy Uno-X’s Joss Lowden for the time trial here. The current women’s hour record holder is always impressive against the clock and she’s shown herself to be more than a time triallist too. We’ve seen rolling terrain suit her, such as when she won the final stage of the Tour de Feminin by over 5 minutes on a solo attack last year.

The reigning British national TT champion Anna Henderson will be up for this race. We’ve seen her do well against the clock before in this sort of race, like at the Healthy Ageing Tour last year and Henderson is enough of an all-rounder to be a threat on the other stages too. Her best result in 2022 was 7th at Omloop het Nieuwsblad but that hides that she spent most of the early spring working for Marianne Vos. We’ve seen Henderson do well on lumpy parcours before like at GP Lorient & Kreiz Breizh Elites Dames last year. She’s an outsider for the podium here. Teammate Karlijn Swinkels is also going to be worth keeping an eye on. She’s had a solid set of results this spring, including 10th at Dwars door Vlaanderen, 11th at Omloop het Nieuwsblad and 13th at Bloeizone Fryslan. We’ve seen her do well in time trials in the past and she’s the sort of rider who can place highly in that and then manage the gaps in the following 2 stages for a shot at the top-10.

The Italian Chiara Consonni continues to have a great season for Valcar. She’s won Dwars door Vlaanderen this spring but also been on the podium numerous times behind the likes of Lorena Wiebes and former teammate Elisa Balsamo. The parcours here will be testing for Consonni, it’s certainly not guaranteed that she will be able to contest the sprint at the end of each day. Despite being a team pursuit rider on the track, and she’s just raced in Glasgow, we’ve never really seen any time trialling ability from Consonni on the road. So with that in mind, the GC should be out of reach. Teammate Silvia Persico will probably have a better shot. She’s certainly not awful against the clock but she will lose time and have some catching up to do. That will probably prevent a particularly high GC finish but you can see her making the top-10 once more.

UAE Team ADQ’s Sofia Bertizzolo has had a long spring classics campaign with 20 race days under her belt already. She won the Trofeo Oro in Euro and was impressively 2nd at Trofeo Alfredo Binda. She’s never shown much in results against the clock so we probably won’t see a GC tilt but I can see Bertizzolo being part of the right groups as things split. The leader will no doubt be Marta Bastianelli but again, it will probably be stage wins in mind rather than the GC for her. She started the year strongly with 3 wins in February but since then hasn’t visited the top step of the podium. A series of top-10s and podiums at Nokere Koerse and Brugge-De Panne followed in March. Paris Roubaix Femmes was one of her worst results of the spring in 15th but that hides that she made a potential race-winning move with Lotte Kopecky. She can close out this period of the season with a win here.

IBCT’s Loes Adegeest has been one of the standout riders of the spring and it’s down to the coverage provided by the races that we’ve seen her do her thing. Adegeest regularly got into breaks and was a constant thorn in the side of teams trying to manage races. At the non-UCI level of racing, she’s picked up 3 top-10 results with a best of 4th at Brabantse Wal.

Simone Boilard continues to impress this season for St Michel-Auber 93. The Canadian finished 8th at Ronde de Mouscron last week, her best result in a European UCI race. It’s been a bit of a long journey to this point for the 3rd place finisher in the 2018 junior Worlds, largely thanks to the covid restrictions, but Boilard is definitely starting to deliver on that early promise in the Elite ranks now.

Top Girls Fassa Bortolo rider Greta Marturano is doing great so far in 2022. She was 9th in the sprint at Trofeo Oro in Euro before finishing 5th in GC at the non-UCI Trofeo Ponente in Rosa. In the last couple of weeks she was 6th at GP de Chambery and 7th at GP Liberazione. She’s a strong all-rounder who may be missing the TT ability to do well in GC here but could be a contender for the stages.