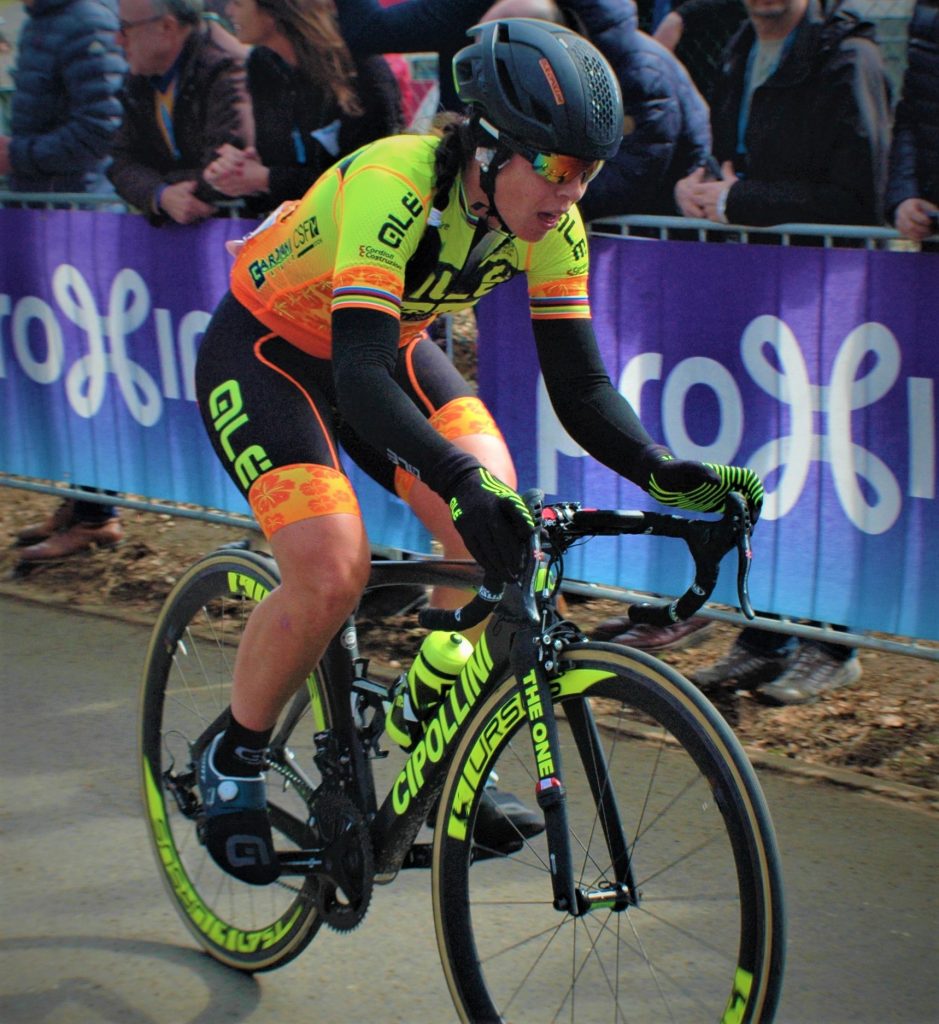 Marta Bastianelli has really had a career of three distinct periods so far. There’s the instant young talent taking the biggest results stage early on. Then the middle part after a 2-year ban where she struggled for results. We’re now in the 3rd part, since 2016, where Bastianelli is one of the strongest riders in the peloton for one-day races.

After finishing runner-up in the Juniors race at her home World Championships in 2004, it was no surprise to see Bastianelli make the jump to the pro peloton. By 2007, Bastianelli was racing for the Safi–Pasta Zara–Manhattan team. She finished runner-up to the legendary Marianne Vos (who was already a world champion) in the U23 European Championships in July. She then took her initial breakout result with 3rd place at the GP de Plouay in August.

More was to come when she won the World Championship road race. Attacking on the final lap, she built up enough of a gap to just hold off a small chasing peloton. Learning from the European Championships, Bastianelli said her aim to avoid sprinting again Vos again. With a pair of World Champions in the peloton, you’d have expected an epic battle for dominance between the pair over the next decade.

Bastianelli started 2008 well with top-10s at Trofeo Alfredo Binda, Tour of Flanders and Flèche Wallonne. This was followed up with 12th Overall in the Tour of Poland, 10th Overall at the Emakumeen Bira, 6th in the National Championships, 3rd in the Euro Championships and then 9th Overall in the Giro Rosa. However a drugs test taken at the European Championships tested positive fenfluramine, a banned appetite suppressant. Bastianelli was stripped of the Giro Rosa result and banned, after appeal, for 2 years.

She came back at the tail-end of the 2010 season and recorded 7th Overall at Thüringen Rundfahrt but struggled elsewhere. During 2011, Bastianelli was no longer a front runner in the biggest races like she had been and struggled. Things were only slightly better over the next few years. 3rd and 5th in the National Championships, a points jersey victory in Languedoc, 6th Overall at Chongming Island were all small highlights in a tough period.

2016 saw the return of the old Bastianelli. Victories included Omloop van het Hageland, GP della Liberazione, Overall at Giro della Campania and the points jersey at Trophée d’Or Féminin. More encouraging was the depth of other results too. 2nd at GP de Dottignies, 3rd at the Madrid Challenge and 5th at both Ronde van Drenthe and the Tour de Yorkshire. She finished the season with a cathartic 5th place in the World Championships.

An encouraging 2017 Classics season included 4th at Gent Wevelgem but the peak of the year was winning a Giro Rosa stage. She also won an Emakumeen Bira stage too and had top-10s in the Women’s Tour. The season was finished with a win at Gran Premio Beghelli.

2018 saw Bastianelli finally fulfil the promise she had when she won the Worlds in 2007. She finally won a European Championships, Gent Wevelgem, Brabantse Pijl, GP de Dottignies, Trofee Maarten Wynants and stages of the Setmana Ciclista Valenciana and BeNe Ladies Tour. To start the 2019 season, Bastianelli had a run of form that saw her not finish outside of the top 10 until May – 16 races. She won Omloop van Hageland, Ronde van Drenthe and the Tour of Flanders in that run. Onto the next part of the season, she became Italian national champion for the first time, won the Vårgårda road race and finished 7th in the World Championships in Yorkshire.

Her now seemingly customary quickfire start to the season saw her manage to win the Vuelta Ciclista Valenciana at the start of the 2020 season and finished 2nd in both Omloop het Nieuwsbland and Omloop van het Hageland. It will be interesting to see how she gets on once the 2020 season resumes.

With the breakaway brought back with 46km left to race, the race immediately split after Tiffany Cromwell’s acceleration on the Kanarieberg. Just 30 riders were left in the peloton as the race hit the Oude Kwaremont and just 18km left to go.

Bastianelli attacked once the cobbles started. She got reeled in but attacked again and this time went clear with Cecilie Uttrup Ludwig, Annemiek van Vleuten, Katarzyna Niewiadoma and Marianne Vos. Vos unfortunately punctured once the group was formed and fell back. Uttrup Ludwig went clear on her own over the summit but was pulled back in again by the others.

Heading round the corner to the Paterberg, van Vleuten attacked on the steep cobbles and managed to drop Niewiadoma but no one else. The lead trio found themselves with a lead of 28 seconds over a group behind containing Chantal Blaak, Ellen van Dijk, Sofia Bertizzolo and now Niewiadoma.

There was time for a brief attack on the flat run to Oudenaarde by van Vleuten but Bastianelli closed the gap. In the sprint Bastianelli was able to easily dispatch the other two riders to claim her first Flanders victory.