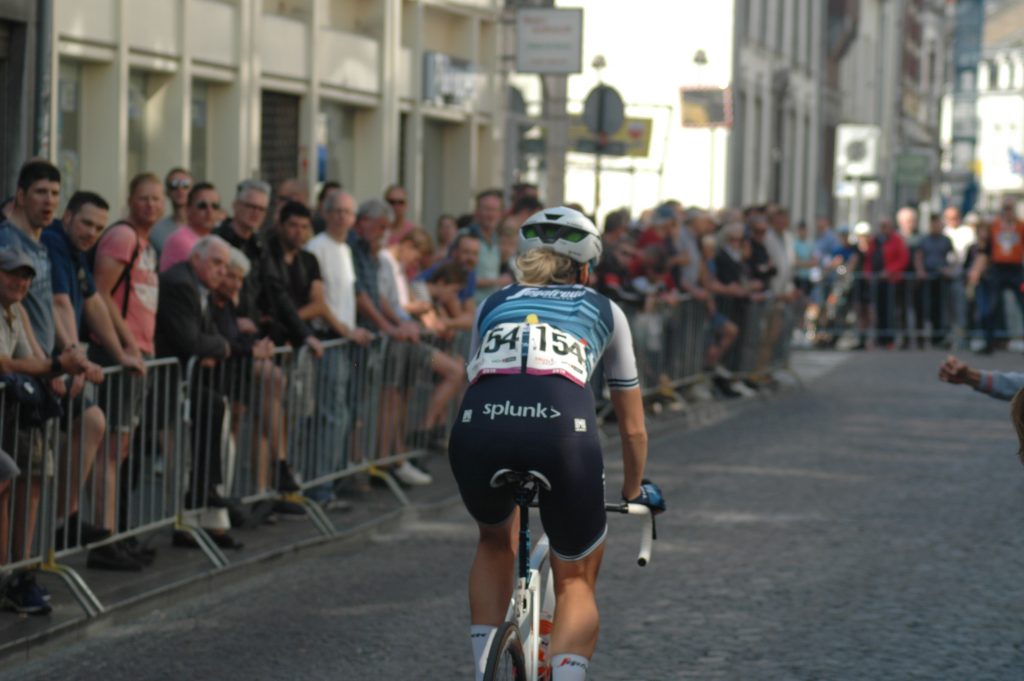 She made an immediate impact with 5th Overall and a stage win at the Tour Féminin en Limousin. The following season, Ellen Van Dijk made her first impact in the Spring Classics. She was 6th in the Omloop Het Volk won by the fleeting talent of Mie Lacota, then finished 7th in Ronde van Drenthe and 3rd in Omloop van Borsele. The middle of the 2007 season saw Van Dijk become the National TT champion for the first time.

Van Dijk attempted to qualify for the 2008 Beijing Olympic Games on the track, but missed out in qualifying by just one spot. After that disappointment, the following day she became a World Champion in the Scratch race. Attacking 8 laps from the finish and never being caught. This season was the peak of her track career, also becoming European U23 champion in the Points and Scratch races before finishing 2nd in the Omnium and U23 Individual Pursuit. On the road she was European U23 TT champion for the first time but had a generally quieter season overall.

Moving onto the Columbia-High Road team for 2009, Ellen van Dijk missed out on the podium in all of the track events she entered at the World Championships. She stayed with the Columbia-High Road team for 5 years, as it morphed into HTC-High Road and then Specialized-lululemon. She retained her European U23 TT title but only finished 20th in the World Championship TT. 2010 saw Van Dijk take her biggest one-day race win to date in the Sparkassen Giro. After outsprinting her breakaway companions, she won a stage and then the GC of the 2011 Ladies Tour of Qatar. She just missed out on her first top-level race win too, losing a sprint to Annemiek van Vleuten in Vårgårda.

2012 is the year where Ellen van Dijk pushed up to the next level. She took part in the London Olympics, finishing 6th in the Team Pursuit on the track, 8th in the TT and didn’t finish the road race after animating it with attacks for her leader Marianne Vos. Van Dijk was 4th Overall in the Ladies Tour of Qatar before finishing 2nd in Omloop het Nieuwsblad, 6th in the Tour of Flanders and 4th in Le Samyn des Dames. She rounded out the Classics by winning Omloop van Borsele. The National TT was won for the first time since 2007 and she took a stage win and the Overall in the Belgium Tour. The season was rounded out with 5th in the World Championship TT, behind Judith Arndt.

Ellen van Dijk had her career year in 2013. A great Classics campaign saw her win Le Samyn des Dames before finishing 2nd in both the Tour of Flanders and Ronde van Drenthe, and 3rd in Trofeo Alfredo Binda. A stage win and the Overall in the Energiewacht Tour and then 3 stage wins and the Overall in Gracia Orlova too. Van Dijk retained her National TT title before winning the TT stage in the Giro Rosa, plus the Overall at both the Belgium Tour and the Boels Ladies Tour. The season was rounded off with her maiden road World Championship, taking the win in the TT ahead of Linda Villumsen. She finished the year-long World Cup competition in 3rd place behind a dominant Marianne Vos and usual contender Emma Johansson.

The following season Van Dijk moved to the dominant Dutch team – Boels – Dolmans. She had a great Classics season again with top-10s in Le Samyn, Ronde van Drenthe, Alfredo Binda and Omloop van Borsele. The obvious crowning glory though was winning the Tour of Flanders, her first solo Women’s World Cup (now WorldTour) race. The rest of the season wasn’t quite as successful as the previous year. She was runner-up in the National TT to Annemiek van Vleuten by just 0.02 seconds and then 3rd Overall in the Boels Ladies Tour. She then finished a relatively distant 7th place in the World Championship TT.

Another stellar Classics season in 2015 saw Van Dijk take 2nd in Omloop het Nieuwsblad and 3rd in Ronde van Drenthe. The middle part of the season saw a run of solid top-10 finishes in one-day races, before finishing runner-up again in the National TT, this time to Anna van der Breggen. The European Games (separate to the European Championships) were hosted for the first time in 2015 and Ellen van Dijk became the inaugural winner. She broke her collar bone during La Course but was able to return to racing. There was the traditional strong finish in the Boels Ladies Tour (3rd Overall) before once again finishing 7th in the World Championship TT. This time her rear wheel wasn’t attached correctly and rubbed on the frame of her bike, eventually it caused a puncture, losing precious seconds.

A quieter start to the 2016 season saw only 8th in Gent Wevelgem and 6th in the Tour of Flanders. She crashed during Omloop het Nieuwsblad and broke a rib and bruised others. This injury meant an enforced break from racing. She then won both TTs to take the Overall victory in the Energiewacht Tour again. Another strong TT performance saw her finish 3rd Overall in Thüringen Rundfahrt. Another injury, this time to her back prevented Van Dijk from starting the National TT. At her 2nd Olympic Games, she finished just outside the medals in 4th place and only 22 seconds from gold. She finished the season by becoming European TT champion and just missing out on becoming World TT Champion again. Only 5 seconds separated her from Amber Neben in Qatar.

After 3 years with Boels-Dolmans, Ellen van Dijk moved across to Team Sunweb. She won the Healthy Ageing Tour, European Championship TT and a stage of the Ladies Tour of Norway. Her Classics season saw more regular top-10s including a best result at Liège Bastogne Liège of 4th. The following season she was winning Spring Classics races again. Firstly at Omloop van het Hageland and then Dwars Door Vlaanderen. Both were won with solo attacks that stuck. She became National TT Champion for the 3rd time and thanks to winning the TTT stage, won the Overall at the Madrid Challenge by La Vuelta.

Ellen van Dijk moved teams again in 2019, heading across to Trek-Segafredo to re-join former teammate Lizzie Deignan. After top-10s in Drentse Acht, Ronde van Drenthe and Tour of Flanders, she retained her title at Dwars Door Vlaanderen. Predictably it was with yet another solo breakaway, her repeated attacks in races sometimes paying off. Later in the season she won the TT at Thüringen Rundfahrt and the European Championships. A title she had now won 4 times in a row. The truncated 2020 season started well with 5th at Omloop het Nieuwsblad and Le Samyn des Dames.

The peloton was reluctant to let any rider gain a solid advantage. Numerous attacks from the likes of Gracie Elvin, Valentina Carretta and Lucinda Brand were neutralised quickly. The attacks were never given more than 30 seconds before being brought back. Crashes in the bunch took care of Amanda Spratt and Rikke Lønne, who both ended up in hospital after the race.

With 26km to go, Ellen van Dijk attacked on the Kruisberg. The team’s tactic was to attack first with van Dijk and then have Lizzie Armitstead counter-attack. As it was, the pack struggled to make the ground to van Dijk, the reigning World Time Trial champion. With the bunch struggling, Tiffany Cromwell tried to bridge across but only found herself caught again on the Oude Kwaremont. Van Dijk’s lead was 38 seconds after the Kwaremont.

Emma Johansson and Elisa Longo Borghini then attacked from behind, joined by the watchful eye of Armitstead. The Paterberg saw no change in the situation. With the final climb out of the way, van Dijk took her advantage and increased it on the flat roads into Oudenaarde. The final margin was 1 minute and 1 second ahead of Armitstead, who outsprinted Emma Johansson for the podium places. Longo Borghini was 4th, a couple of seconds behind and caught by a chasing bunch.