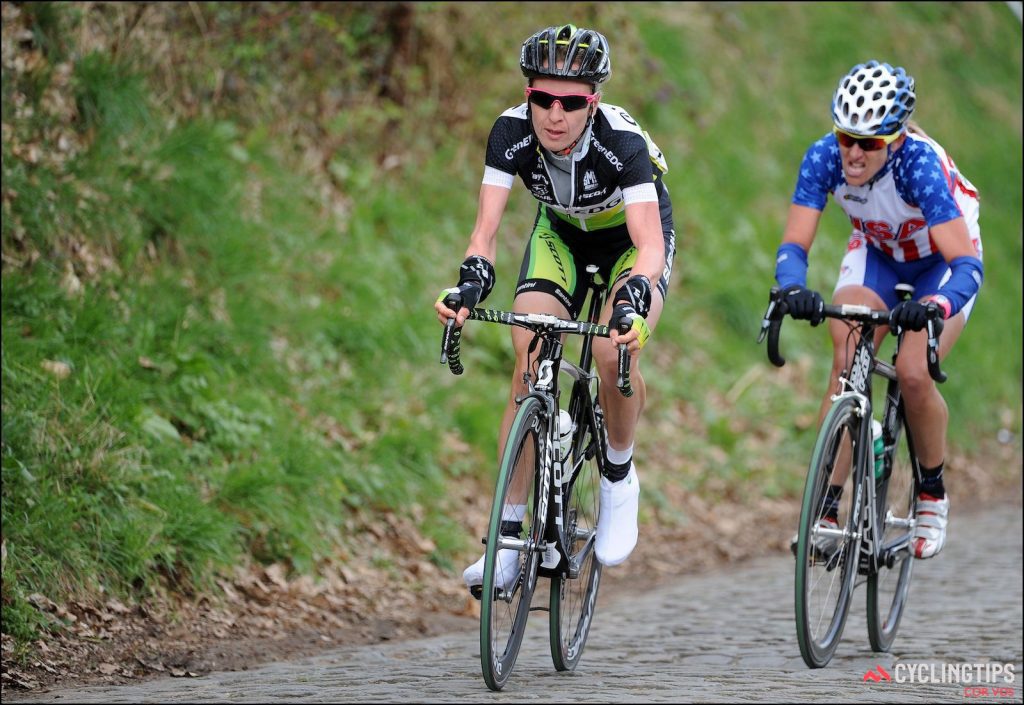 Judith Arndt started her career mainly as a track cyclist and time triallist. She took a bronze medal in the 1996 Olympics in Atlanta in the Individual Pursuit before becoming World Champion in that discipline in 1997. Her time trialling abilities saw her finish 3rd in the World Championships in 1997 too.

Arndt took her first major victory on the road in 1999, winning the Tour de Bretagne, whilst also claiming 2nd in the Holland Ladies Tour. She went into the 2000 Olympic track events as one of the favourites but a poorly timed viral infection hampered her. After this Arndt made the switch to racing on the road more.

She made an immediate impact in 2001, finishing 2nd in the season-long World Cup competition. Arndt won the GC in Gracia-Orlova and Tour de Bretagne again. She was consistent across all the stage races with 2nd in Tour de l’Aude and 3rd in the Grand Boucle. By the end of the season she finished just off the podium with 4th in the World Championships, her highest placing so far.

Judith Arndt went on to win the Tour de l’Aude twice in 2003 and 2004. She finished 3rd in the Grand Boucle again in 2003, claiming 3 stage wins along the way. For the first time there were top Classics results too. 2nd in GP de Plouay and 5th in Ronde van Drenthe gave a hint at her potential. She claimed 5th in Flèche Wallonne in 2004 behind winner Sonia Huguet.

The 2004 season was her best, winning the World Cup, finishing 2nd in the Olympics road race before ending the season by becoming World Champion in the road race and 2nd in the time trial. The following year she reached the podium in Flèche Wallonne for the first time with 3rd place. Her 5 career podium spots (4 in a row between 2005-2008) are only matched by Anna van der Breggen and Marianne Vos. Both of those riders have multiple wins whereas Arndt never reached the top step as Vos and Nicole Cooke took the victories.

Judith Arndt won the 2008 Tour of Flanders by escaping from the peloton with renowned time triallist Kristen Armstrong. The pair of them held off the chasing pack, which included Cooke, Vos, Johansson and a young Marta Bastianelli to win by 21 seconds. 2009 wasn’t her strongest year but 2010 saw Arndt regain her stage racing abilities with 2nd in the Giro Rosa and La Route de France. She also took top-10s in Flèche Wallonne, Trofeo Alfredo Binda and the Tour of Flanders.

2011 saw Arndt win the World Championships in the time trial (which she retained in 2012). Only Annemiek van Vleuten, Jeannie Longo and Leontien van Moorsel can match Arndt in winning both the Worlds road race and time trial. Another 3rd place at the Giro Rosa and her 5th podium in Flèche Wallonne kept up good runs. She also finished 5th in the Tour of Flanders and 7th in GP de Plouay and Trofeo Alfredo Binda that year.

At the age of 36, 2012 turned out to be Judith Arndt’s last season as a pro. She finished it as reigning double national champion and the world time trial champion. She won the GC at both Thüringen-Rundfahrt and the Emakumeen Bira. Before taking another Tour of Flanders victory, once again attacking with Kristen Armstrong before beating her to the line.

2012 saw the Tour of Flanders move its finish line for both the men and the women. Gone was the old finish over the Muur van Geraardsbergen and into Ninove and instead we had the current finish over the Oude Kwaremont & the Paterberg before 10km into Oudenaarde.

The race took off once it reached the cobbles on Paddestraat. The defending champion Annemiek van Vleuten punctured, wrecking her chances. Kristen Armstrong’s team kept the peloton on its toes, making the race difficult and stringing out the bunch. Various gaps opened and closed as the race developed. At the foot of the Oude Kwaremont, Kristen Armstrong made her move. Only Judith Arndt was able to cover the attack and they gapped the peloton.

Behind them, the peloton complained that they weren’t getting race information. No time gaps or even who was in the break was fed back to them. Between them, the World Champion winning time triallists, Armstrong and Arndt were able to keep the peloton at bay. They worked together until the last kilometre.

Kristen Armstrong opened up the sprint first at 350m to go but Arndt had the better legs and was able to come round her to take her 2nd Tour of Flanders victory.