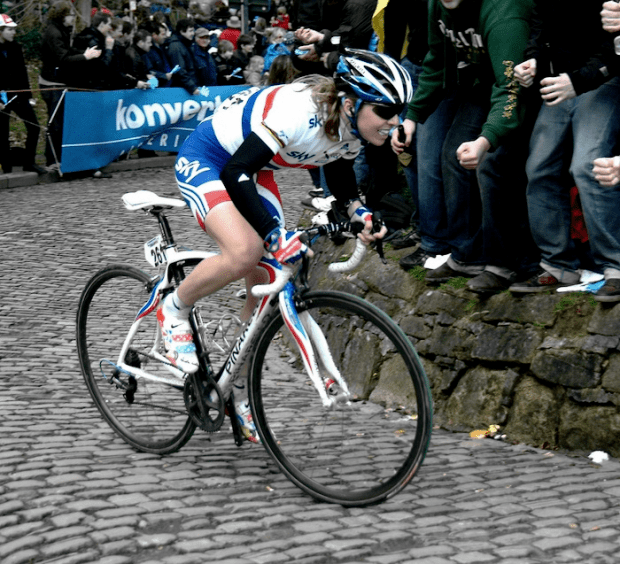 Nicole Cooke turned professional in 2002 (aged 19) and won the Commonwealth Games in her first season. She’d already won the National Championships twice (once winning the Seniors as a Youth) and had started a run where she won it every year between 2001 and 2009.

The following season, she made her mark in the pro peloton. She won Amstel Gold, Flèche Wallonne and the GP de Plouay. She comfortably won the Women’s Road Cup by nearly 100 points. She finished the season with 3rd place in the World Championships. Her targets changed for 2004, with less major results in the Classics. Instead, she became the first Brit, male or female, to win a Grand Tour. She won a stage on her way to winning the Overall in the Giro Rosa, finishing ahead of the 5-time winner Fabiana Luperini.

Focusing back onto the Classics for 2005, Cooke won her second Flèche Wallonne and took the victory in the Trofeo Alredo Binda too. She finished a step higher in the World Championships, taking the silver medal for second place. The following year saw Cooke achieve more success in stage races. This time she won a pair of stages on her way to Overall victory in the Grande Boucle (a Women’s Tour de France). She once again won the World Cup standings through her great consistency in the biggest races. She retained her Flèche Wallonne title along the way.

She took the 2007 Trofeo Alfredo Binda and a maiden Tour of Flanders win. She was pipped to the 2007 World Cup title by an upcoming Marianne Vos. She was a whisker away from retaining Flèche Wallonne for another year, finishing 2nd to Marianne Vos (again!). The Classics were sacrificed in 2008 to try and fill in the holes in her palmares. A successful gamble as Cooke became Olympic Road Race champion and World champion too. The first British World Champion since 1982.

With Marianne Vos beginning to dominate the sport, Cooke’s wins began to dry up but she was still consistent. 4th and 6th in the Tour of Flanders and Flèche Wallonne behind the likes of Vos, Kirsten Wild and Emma Johansson. She did well in stage races with 4th in Emakumeen Bira, 5th in Tour de l’Aude and 6th in Trophée d’Or Féminin.

A solid 2010 followed with 2nd in her best race, Flèche Wallonne, behind fellow Brit Emma Pooley. 6th in Alfredo Binda and 9th in Omloop van Borsele rounded out a solid Classics season. A front-runner in the World Championships, she was in the lead group but finished 4th of 4 in that group. The erstwhile rivals Vos, Johansson and Bronzini beating her.

2011’s best result was a stage win in the Giro Rosa, finishing just ahead of the peloton led by Vos. The usual high finish in Flèche Wallonne continued with 5th place. A solid 6th place in the 2nd group on the road in GP Elsy Jacobs was achieved too. She finished 4th in the World Championships, once again finishing behind Vos and Bronzini in Copenhagen.

2012 saw Cooke’s powers start with wane with no top-10 results in major races and a single-stage victory in the Energiewacht Tour. At the end of the season as the calendar ticked into 2013, Cooke announced her retirement. She gave a speech where she singled out everything that was wrong in modern cycling. Including doping, corruption, gender inequality, Tyler Hamilton, Lance Armstrong, the UCI, riding without wages and minimum wages for women. The speech lasted a full 20 minutes.

After winning the 2005 edition already, Nicole Cooke went into the 2007 race as a favourite. Resplendent in the British National Champs jersey she took an epic win.

Her Raleigh-Lifeforce-Creation teammates animated the race, making sure they were in every breakaway and attack. Menikini’s Fabiana Luperini attacked late on and as she was caught, Nicole Cooke attacked herself on her own. She was able to keep up the pace ahead of the peloton with other teams unable to work to close the gap. By the finish line, Cooke had won by 42 seconds.