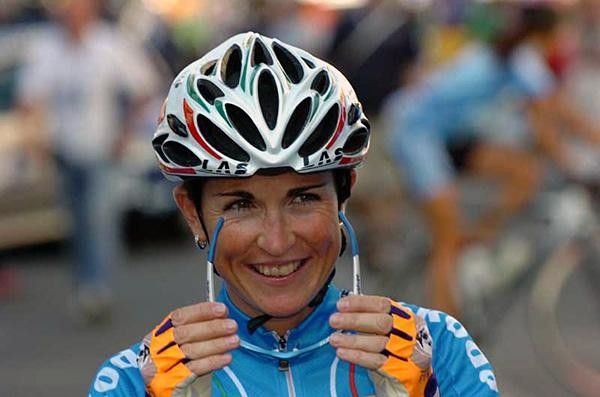 Fabiana Luperini started racing at the highest level in 1993, aged 19. She started well with a 4th place in the Trofeo Alfred Binda and a respectable 25th in the World Championships in Oslo. The following year, she won her first Alfredo Binda at just 20 years old. She beat the 34-year-old Lucia Pizzolotto, who herself had won the Trofeo Alfred Binda in her early-20s back in 1982.

Luperini started her dominance of the Giro Rosa in 1995. She won the race 4 years in a row and carved out a reputation as the strongest climber in the women’s peloton. She later won a 5th Giro Rosa in 2008, 10 years after her initial run ended. She still holds the record for most editions of the Giro Rosa won.

At the same time as winning those 4 editions of the Giro Rosa, Luperini was also busy winning in France. She won 3 editions in a row of the Tour Cycliste Féminin (the then Women’s Tour de France) between 1995 and 1997. The following year she was 2nd to Lithuanian Edita Pučinskaitė. She returned to the podium in 2000, finishing 2nd to Joane Somarriba who won her 2nd of 3 victories that year.

Fabiana Luperini also won the Tour de l’Aude in 1998 which eventually became the de facto Women’s Tour de France once the Tour Cycliste Féminin/Grand Boucle lost its place on the race calendar. With her reputation confirmed as one of the best women’s Grand Tour riders in history, she also took on some of the classics.

Apart from her 1994 Trofeo Alfredo Binda victory, Fabiana Luperini also won that race again in 2000. She beat the Finn Pia Sundstedt into second place, who she already had a rivalry with at Flèche Wallonne. Across the course of her career, Luperini finished in the top-10 at Alfredo Binda 6 times.

Luperini won 3 of the first 5 editions of the Women’s Flèche Wallonne. In the first edition in 1998 she beat Pia Sundstedt but had to wait until 2001 to win again. This time she beat Anna Millward and Trixi Worrack. She retained the title in 2002 by beating Canadian Lyne Bessette and Swiss Priska Doppmann.

In 2004, Luperini became Italian national champion for the first time since 1996. She would go on to win it again in 2006 and 2008. She was always consistent in the Giro del Trentino Alto Adige-Südtirol as well. Luperini won that race on 5 occasions and finished 2nd in 4 other years too.

Fabiana Luperini raced on gamely against the new generation led by the likes of Marianne Vos and Emma Johansson and continued to still get good solid results as she neared 40. She was running in 2nd place during the 2013 Giro Rosa until being disqualified for having a bike just 200g underweight. Her final season was in 2014 and aged 40, still managed to finish a respectable 16th in the Giro Rosa with Marianne Vos and Anna van der Breggen on the podium.

It’s Flèche Wallonne so predictably it all came down to the infamous Muur de Huy. The steep finish seems to preclude any attempts to light up the race before it. In the 2002 edition Luperini’s Edilsavino team tried to make the race hard for her rivals. Eventually on the second to last climb, a break of 10 managed to break away. The peloton responded quickly though and it was snuffed out.

Into the bottom of the Muur de Huy, Fabiana Luperini and Priska Doppmann attacked and got a gap. They were being hunted down by Mirjam Melchers, Lyne Bessette and Nicole Cooke. With just 800 metres still to go, the chasers could see the attackers ahead. Luperini pulled away on the steepest part of the Muur, dropping Doppmann. Luperini took a comfortable win by 12 seconds and had plenty of time to celebrate. Behind her, Bessette found an extra gear and pipped Doppmann for 2nd place.