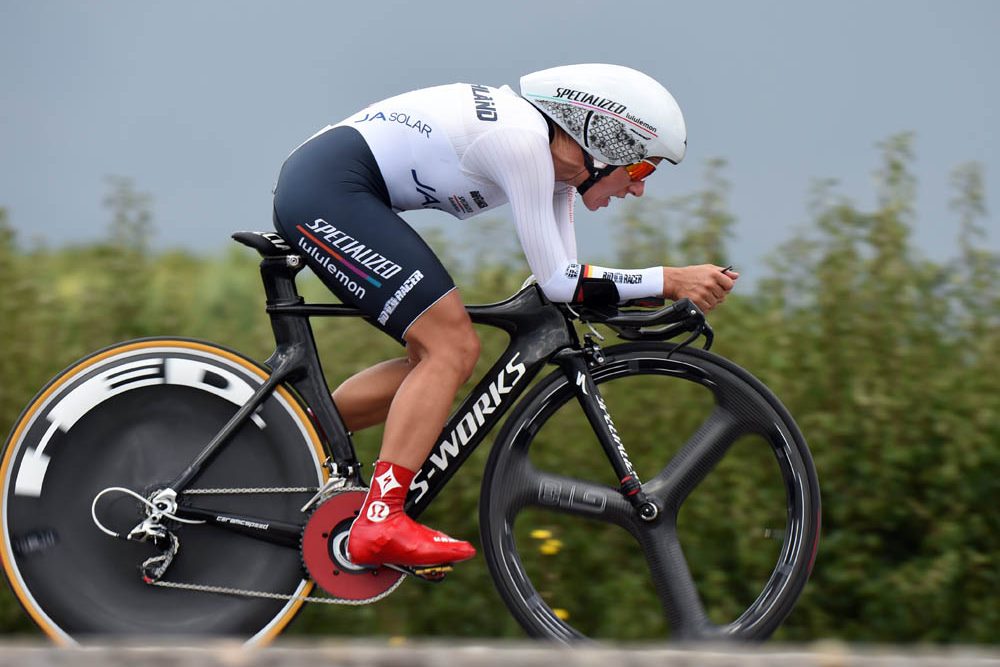 Trixi Worrack announced herself as a rider with great potential by winning the 1998 World Juniors Time Trial. She beat Olga Zabelinskaya and Geneviève Jeanson. The following year, she finished 2nd in the 1999 World Juniors Road Race. Worrack, in the winning break with Geneviève Jeanson, was distanced late on and finished 8 seconds behind Jeanson. Noemi Cantele rounded out the podium.

Racing for the Red Bull and German National teams across 2000 and 2001, she continued to show potential. 9th Overall at the Holland Ladies Tour in her first pro season was her best result. That season ended with a respectable 31st in the World Championships, finishing next to teammate Judith Arndt. Worrack had her first big Spring Classics result the following year. She managed to get onto the podium in Flèche Wallonne, finishing behind stars Fabiana Luperini and Anna Millward. More stage racing success saw her finish 3rd Overall in her home race of Thüringen-Rundfahrt.

Trixi Worrack found herself without a pro team in 2002 but continued to race. She won the U-23 European Championships road race that year, beating out Evy Van Damme in a medium bunch sprint. She took a stage win at Thüringen-Rundfahrt before near misses at the National TT (3rd) and the Czech Tour (2nd). The German Equipe Nürnberger Versicherung team signed her for 2003 and she raced for them until the end of 2010. There was another top-10 at Flèche Wallonne that year before Trixi Worrack won the German National Road Race. 2nd place Overall in the Holland Ladies Tour was another highlight.

She finished 7th in the 2004 Flèche Wallonne a couple of weeks after 2nd place in the Tour of Flanders. She finished just 4 seconds behind the winner Zulfiya Zabirova. Once again, she finished 2nd Overall in the Holland Ladies Tour before just missing out on the World Championships podium. Her teammate Judith Arndt won that year in Verona. Worrack had beaten Arndt by 8 seconds earlier in the season to win the Tour de l’Aude Cycliste Féminin Overall.

2005 saw Worrack win her biggest race yet in the Primavera Rosa as she gapped and stay ahead of 2nd placed Nicole Cooke. She came close to retaining her Tour de l’Aude Cycliste Féminin title, finishing just 1 second behind Amber Neben. She was also 2nd Overall in the Emakumeen Bira that year. 2006 was Trixi Worrack’s best year yet. Another Flèche Wallonne podium with 3rd place, 8th in GP Dottignies, 2nd in Holland Ladies Tour and the Tour du Grand Montréal, plus 3rds in Tour de l’Aude Cycliste Féminin and Thüringen-Rundfahrt. The season was rounded off with a silver medal in the World Championships. Worrack was outsprinted by Marianne Vos as she won her first World Championship but she in turn outsprinted Nicole Cooke and Noemi Cantele.

The 2007 season was once again one of podiums rather than wins. Another podium at the Tour de l’Aude Cycliste Féminin with 2nd place was matched at the Tour du Grand Montréal. She was just off the podium with 4th place in the Tour of Flanders and 9th in the Drentse Acht race too. There were the traditional good results at Thüringen-Rundfahrt with 6th place and Holland Ladies Tour with 4th place Overall.

Worrack got her first top-10 in the Trofeo Alfredo Binda in 2008 before launching into another successful season of stage racing. She achieved 2nd place in Thüringen-Rundfahrt and Giro della Toscana Int. Femminile, 3rd place in Tour de l’Aude Cycliste Féminin, 4th in the Emakumeen Bira and 6th in the Holland Ladies Tour. Once again she was a contender in the World Championships in Varese. This time she was 5th after escaping in a breakaway of 5 riders and once again putting in work as a teammate for Judith Arndt, who finished 3rd behind winner Nicole Cooke.

The 2009 season was very similar with podiums in stage races. There were also more Spring Classics results with a 2nd in GP Dottignies and the Ronde van Drenthe. The following season, Trixi Worrack won the Tour Feminin – O Cenu Ceskeho Svycarska whilst winning all 5 stages outright. There were strong results throughout the year but the exceptional results she’d scored in stage races previously were less frequent. Working with Judith Arndt once again, she finished 7th in the World Championships in Geelong as her teammate finished 5th.

With the demise of her previous team, Trixi Worrack moved to AA Drink – Leontien.nl in 2011. On a star-studded team, Worrack had her quietest year in terms of results since her first years as a pro. She still managed 4th in the Trophée d’Or Féminin and 5th in the Emakumeen Bira. Compared to previous years, her 64th in the Worlds was disappointing. She moved onto the Team Specialized-lululemon team from 2012 until 2015. Here she regained her form. She finished 3rd in Omloop het Nieuwsblad, Trofeo Alfredo Binda and Le Samyn des Dames, plus 5th in Ronde van Drenthe as she returned to being a Classics contender. She returned to the Thüringen-Rundfahrt podium with 2nd place and 4th at the Holland Ladies Tour, races she always did well in. Team Specialized-lululemon also went all in for the World Team Time Trial. Worrack was part of the winning team that had prepared by winning Vårgårda TTT too.

A quieter Spring Classics campaign in 2013 saw Worrack’s only top-10 result come at the Omloop van het Hageland. She became German National Champion for the 2nd time in her career and just missed out on the double by finishing 2nd in the TT. The usual high placing with 6th place in the Holland Ladies Tour was achieved thanks to winning the team time trial. A continuing theme as Team Specialized-lululemon won in Vårgårda and the World Championships again. Worrack scored another top 10 at Drentse Acht at the start of 2014, and a pair of 2nds in the National Championship races before once again being part of the winning Specialized-lululemon team in Vårgårda and the World Championships. The main sponsors pulled out after 2014 and the team was renamed Velocio–SRAM Pro Cycling in 2015.

Despite losing some key riders in Chantal Blaak and Evelyn Stevens, the team retained their World Team Time Trial championship. Worrack herself finished 9th in Omloop het Nieuwsblad but the biggest results were winning the Tour of California and becoming National Champion for the 3rd time. The Velocio-SRAM team was technically closed at the end of the season but was reborn as Canyon-SRAM for 2016. Worrack started 2016 well by winning the Tour of Qatar and finishing 3rd in Ronde van Drenthe. Unfortunately, a bad crash on a descent at the Trofeo Alfredo Binda meant that she had to have emergency surgery to remove a kidney. She returned to racing 3 months later and won the National TT Championship. Worrack’s 4-year streak of winning the Worlds TTT was broken when the Boels-Dolmans team, with former teammates, put in a dominant performance.

From 2017, Trixi Worrack began to transition into more of a road captain role with strong time trials. She retained the National TT Champs before returning to her usual form in the renamed Thüringen Ladies Tour with 4th place. She narrowly missed out on holding the National TT jersey for another year in 2018, finishing 2nd. She took the bronze medal at the TT in the European Championships and then won her 5th Worlds Team Time Trial gold as Canyon-SRAM pipped Boels-Dolmans to the crown. 2019 saw very few individual results as she moved to the Trek Segafredo team with its many star riders. She was once again on the winning team in the Vårgårda TTT though. Worrack continues to race in 2020 in her 39th year. Worrack has now retired after completing the 2021 Women’s Tour.

The 2005 Primavera Rosa covered the same last 118km of the men’s Milan San Remo (won by Alessandro Petacchi that year). A quick start to the race saw most of the peloton stick together on the mainly flat parcours. The Cipressa loomed with 30km remaining, giving attackers a chance to create gaps. Pre-race favourite Oenone Wood crashed shortly before the climb and had to be brought back up to the peloton.

3 riders managed to escape over the Cipressa summit and the peloton hampered itself with a series of crashes behind. Teammate Judith Arndt and Trixi Worrack brought the front runners back to the peloton before the Poggio. This allowed their leader Oenone Wood to keep a watchful eye over rivals on the final climb. An elite group of 15 broke clear over the top with a nervous peloton trying to close the gap on the descent.

The Equipe Nürnberger Versicherung team had 4 riders in the front group and Trixi Worrack led the lead-out train. She flew round the final bends with 500 metres to go onto the Via Roma. So much so that she got a gap. Her teammates behind who had been on her wheel changed tactics to become blockers for the chasers. Worrack hung on to beat Nicole Cooke and Oenone Wood by 1 second.