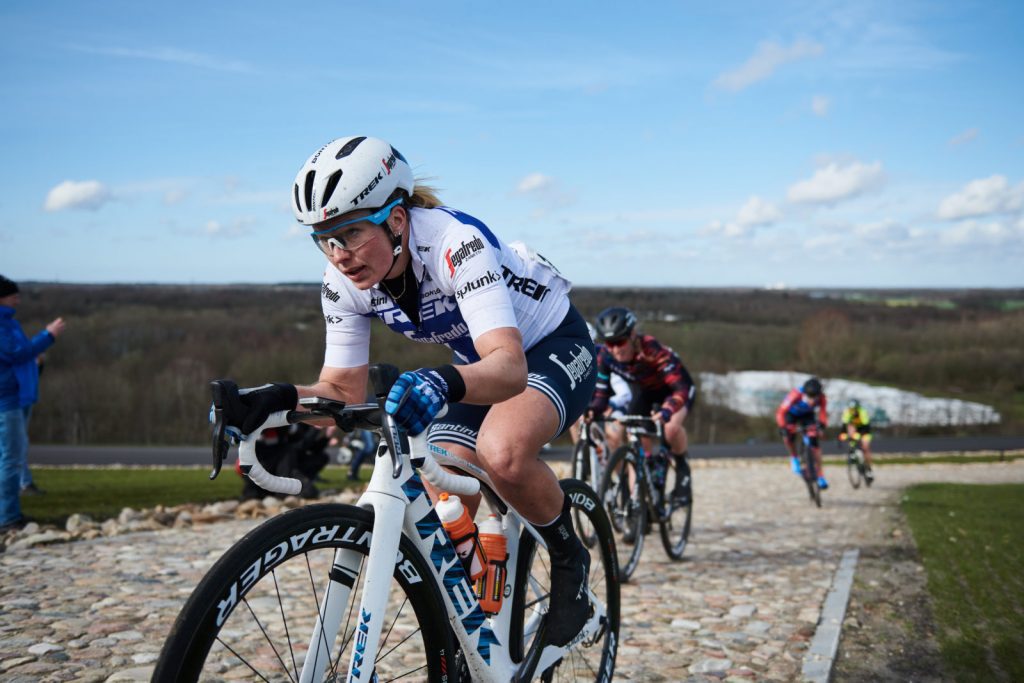 The race acts as a Friday warm-up for the Ronde van Drenthe which takes place on Sunday. Recent years have seen the addition of the VAMberg to the race. Two quick ascents can split the peloton, the steepness coming into play. Famously the wind blew riders off their bikes here in 2019. The climbs are a long distance from the finish so aren’t race deciders for the front of the peloton.

A bunch sprint is the most common outcome of Drentse Acht van Westerveld. There are exceptions though. The wind in 2019 created huge gaps. Leah Kirchmann won in 2016, beating 6 other riders in a sprint after escaping the peloton. Giorgia Bronzini won in 2015 from a group of 4 riders that had a small gap. Chantal Blaak won solo in 2014 with a gap of 8 seconds. Ina-Yoko Teutenberg won the 2nd edition in 2010 by finishing 6 seconds ahead of Emma Johansson.

The 2019 Drentse Acht van Westerveld saw riders race in 25+mph winds. The peloton still together when Trek Segafredo pushed hard. They created a front group of 14 riders with 3 of their team represented. Coming off the VAMberg, Lotta Lepisto crashed, reducing the front group to just 8 riders.

The group contained Audrey Cordon-Ragot, Ellen Van Dijk, Amy Pieters, Marta Bastianelli, Alexis Ryan, Lisa Klein, Gracie Elvin and Evy Kuijpers. By the end of the race, the riders would find themselves close to 12 minutes ahead of the peloton. The group worked together until they reached the finishing circuit with 12km to go. Ellen van Dijk tried to solo attack a few times. Gracie Elvin then counter-attacked, but it was Audrey Cordon-Ragot who got a gap when she attacked.

Riding solo into a headwind often doesn’t help solo riders. However, with Ellen van Dijk providing no assistance, the other 7 riders didn’t have the legs to hunt down Cordon-Ragot. The group let her go and Cordon-Ragot won by 90 seconds. Amy Pieters and Marta Bastianelli rounded out the podium.

The VAMberg is a hill that’s been created by earthing over a mound of landfill. Its creation was with cycling in mind. The steep cobbled ascents used by races help to tire legs however the whole hill isn’t cobbled so everyday cyclists can choose their ascent.