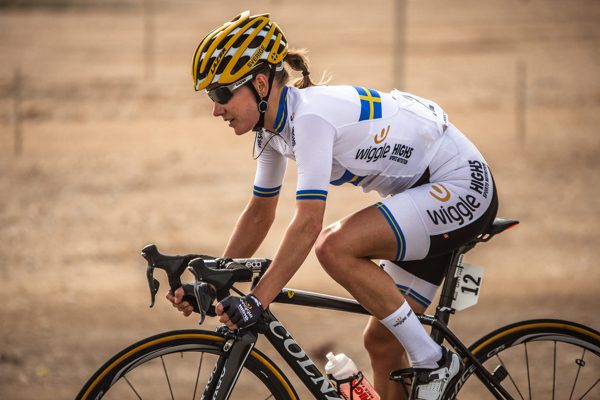 Emma Johansson turned pro in 2005 for the Spanish Bizkaia–Panda Software–Durango team. There weren’t too many international results to speak of but Johansson became Swedish National TT Champion for the first time. The following year was similar but 9th Overall at Trophée d’Or saw her mixing with some of the biggest names.

Moving to the Vlaanderen–Capri Sonne–T-Interim team for 2007, Johansson had a breakout year that finished with 6th place in the World Championships. Along the way she’d become National TT Champion again, sprinted well in the Grand Boucle (the then women’s Tour de France) and finished 2nd in Prijs Stad Roeselare. She also improved to 4th Overall in the Trophée d’Or too.

Emma Johansson was snapped up by the AA-Drink Cycling Team for 2008 and became one of the strongest riders in the women’s peloton. Her progression continued as she won the Trophée d’Or. In her first real Classics season, she finished 3rd in Omloop Nieuwsblad, 9th in the Tour of Flanders, 7th in Alfredo Binda and 12th at Flèche Wallonne. To cap a great season, she won an Olympic Silver in the road race too. Then just missed out on a Worlds podium in 4th place. Another team move at the end of the season saw Johansson join the Red Sun Cycling Team as a team leader.

Already an Olympic Silver medallist, the Silver Emma nickname started to take hold in 2009. Both Trofeo Alfredo Binda and Flèche Wallonne saw Johansson take the 2nd spot on the podium. There was also a first podium at the Tour of Flanders with 3rd place. The highlight of the year was winning Ronde van Drenthe as she beat Loes Gunnewijk and Chantal Blaak. Her consistency across the year saw her finished 3rd in the World Cup standings.

Johansson started 2010 with a win at Omloop het Nieuwsblad before finishing on the podium at Trofeo Alfredo Binda, Drentse 8 and Flèche Wallonne. There were a hatful of 4th places at the Tour of Flanders, GP de Dottignies, Prijs Stad Roeselare and GP Elsy Jacobs to cap a great Classics season. She won the Trophée d’Or again before finishing 3rd in the World Championships in Geelong.

2011 began with a rich vein of results as Johansson won 4 of her first 6 races. She retained Omloop Nieuwsblad, before winning Omloop van Hageland, Cholet Pays de Loire and GP de Dottignies. Even when she missed out on the win she was still 2nd in Trofeo Alfredo Binda and 4th in the Tour of Flanders in that spell. She continued to get results with 2nd at Flèche Wallonne and Prijs Stad Roeselare and 3rd at both Drentse 8 and GP Elsy Jacobs. There was also an encouraging 7th place at the Giro Rosa as Marianne Vos won. She finished 2nd in the World Cup standings.

A relative off-year in 2012 still saw Emma Johansson finish 3rd in the World Cup standings. The only wins of note though were a Giro Rosa stage and the National Championships. The reams of podiums continued with 2nd Overall at Emakumeen Bira, another Giro Rosa stage, GP de Dottignies. There were 3rds at Thuringen Rundfahrt (Overall), Ronde van Drenthe and stages of the Holland Ladies Tour.

She came back strong in 2013, but again not necessarily winning too often. She took the Overall in the Thuringen Rundfahrt and Emakumeen Bira and then won the one-day races of Cholet Pays de Loire and Gooik-Geraardsbergen-Gooik. Her 2nd places in the biggest races of Vårgårda, Alfredo Binda and GP de Plouay, plus 3rd in the Tour of Flanders and Ronde van Drenthe saw her win the World Cup standings for the first time. Her consistency over the season rewarded despite Marianne Vos winning 5 of those races.

Arguably, Johansson had an even better 2014 season, but so did Marianne Vos who pipped her to 2nd place in the World Cup standings. Johansson won the BeNe Ladies Tour and Le Samyn for the first time, yet another Cholet Pays de Loire and a first Trofeo Alfredo Binda after 3 previous 2nd places. She was 2nd Overall in the Women’s Tour of Britain, Omloop het Nieuwsblad and Omloop van het Hageland. She made the final step of the podium in the World Championships in Ponferrada and in the Tour of Flanders too.

Only a single Spring Classics podium was earned in 2015. A 3rd place in Le Samyn as a new generation took over in the absence of the injured Marianne Vos. She continued to do well in stage races though, winning Thüringen Rundfahrt and the Belgium Tour, whilst finishing consistently high in other races too.

The 2016 season proved to be Emma Johansson’s last with a desire to start a family taking priority. She returned to the podium of the Tour of Flanders (2nd place naturally). Then won another Olympic Silver in Rio, losing out in the sprint to Anna van der Breggen. A second Emakumeen Bira was won and in her final Trofeo Alfredo Binda and Flèche Wallonne races she finished 4th and 7th respectively. She also finished 3rd in the 2nd Women’s Strade Bianche too.

Emma Johansson’s consistency across her career was seriously impressive. She finished top-10 in 36 of the 45 major stage races she competed in and also top-10 in 27 of the 34 major Spring Classics she raced. The Spring Classics in particular, she only finished lower than 14th in 1 race out of those 34 editions. The only tarnish on her record is that maybe she should have won more races. But in an era with Marianne Vos at her best and plenty of other competition, that would be easier said than done.

A group attacked on the 3rd climb of the day, the Kluisberg. Emma Johansson, Liesbet de Vocht, Sarah Düster and, future Tour of Flanders winner, Grace Verbeke all attacked. Regina Bruins then joined her Cervelo teammate Düster (and the others) on the 4th climb of the race. The plan to save pre-race favourite Kirsten Wild’s Cervelo team from having to work more.

This breakaway established a lead of 2 minutes which it managed to hold all the way until the finish. Sarah Düster was dropped late on by the group and destined to finish 5th. Despite Bruins staying with the break, she was the weakest sprinter on paper. The plan to aid her leader didn’t work out either. Wild had been involved in a crash behind and taken out of contention.

Emma Johansson stated afterwards that she wasn’t confident about the sprint. She tried to attack before the end to finish solo but it didn’t stick. Despite finding herself on the front and leading out her 2 remaining breakaway companions, Johansson took the sprint easily enough. Neither of the other 2 riders looked like they were about to come round. The first of the scattered peloton arrived nearly 3 minutes later, with Martine Bras outsprinting Mirjam Melchers.