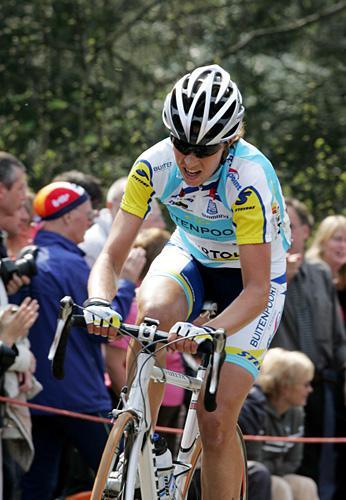 Mirjam Melchers turned pro in 1998 for the Rabobank Women’s Team, aged 23. In her first pro season, she won the Ronde van Dordrecht and a stage of the Holland Ladies Tour. She kept up her winning ways in 1999 with multiple stage wins. Melchers won stages at the Boucle (a women’s Tour de France), the Holland Ladies Tour, Tour de l’Aude (also a women’s Tour de France at one point) and the Women’s Challenge in the US.

She confirmed her place as one of the top one-day racers in the peloton in 2000 by finishing 3rd in the year-long World Cup competition. Along the way she won the Dutch National Championships, won the GC and 2 stages at the Holland Ladies Tour and another Grand Boucle stage. She also finished highly in top races. 6th in the Primavera Rosa (a now-defunct Women’s Milan San Remo), 3rd in the Canberra World Cup, 5th in the Montreal World Cup and 5th in the end of season World Championships.

Her success continued in 2001, improving to 2nd in the World Cup competition. She won the GC at both the Thüringen Rundfahrt and Giro dell Alto Adige for the first time. Her Classics results saw her finish 2nd in the Primavera Rosa, 2nd in Amstel Gold and 9th in Flèche Wallonne. She was once again 5th in the World Championships.

She continued to finish 2nd in the UCI Rankings, a run that extended from 2001 to 2004. Melchers took her biggest win to date in the 2002 season, finally reaching the top step at Primavera Rosa. The closest she came to winning the World Championships was in Hamilton, Canada in 2003. She finished 2nd to Susanne Ljungskog. Mirjam Melchers won the 2003 Ronde van Drenthe ahead of Ghita Beltman. Her 2004 season was remarkably consistent with loads of top-10 results but only the Holland Ladies Tour GC + stages and National TT Championships to show for it.

The 2005 season was the last one with Mirjam Melchers at her peak. She took the victory at the Women’s Tour of Flanders. She got into a break with teammate Susanne Ljungskog and then attacked her to win by 7 seconds. There was also a 4th place at Flèche Wallonne and 5th in the Primavera Rosa (the last year it was held). The following year she retained her Women’s Tour of Flanders title. Beating Austrian Christiane Soeder by 1 second and everyone else by around 50 seconds. She’d also finished 2nd in the then Omloop Volk (soon to be the Women’s Omloop Nieuwsblad).

Later on in the 2006 season Mirjam Melchers crashed badly in the Euregio Tour and she broke her pelvis, a hip and her jaw. She returned for the start of the 2007 season but a new generation of top riders including Marianne Vos, Nicole Cooke and Marta Bastianelli were starting to come through. Melchers now appeared to be a regular top-20 finisher rather than the top-10 one that she used to be.

This carried into the 2008 season where the top results were fewer than before. She was 2nd in the National Championships Road Race behind a dominant Marianne Vos but did win the National TT Champs. Melchers also won the prologue of the Giro Rosa to show that was now probably more of a time triallist than a one-day racer.

She started the 2009 season well with 7th at Omloop Nieuwsblad and 5th in GC at the Tour of Qatar. However, her best result all season was 2nd in the lower-ranked Omloop Van De Blauwe Stad. She contemplated retirement at the end of the season as her Flexpoint team folded but joined her husband’s Cervelo team for 2010, joining eignan. After racing just twice early in 2010, she announced her retirement to start a family.

2005 Tour of Flanders for Women

The 2nd Women’s Tour of Flanders saw the riders take on 112km on the old finish route to Ninove.

With 25km left to race, Mirjam Melchers attacked just before the Muur van Geraardsbergen, getting a gap on the peloton. She took a lead of 15 seconds over the when her teammate Susanne Ljungskog attacked the peloton on the steep cobbles. Ljungskog joined up with Melchers 200 metres after the summit of the climb.

Despite a group of 20 riders chasing the pair, the gently downhill roads to Ninove after the Bosberg gave the advantage to the breakaway. Once the gap was established, it never came back under 40 seconds. With just 200 metres left to race, Mirjam Melchers sprinted early and took the win over Ljungskog by 7 seconds.

Behind them, the chasing group were sent the wrong way with 2km left to race. They ended up crossing the finish line in the wrong direction. The entire group ended up not being classified in the results. Monia Baccaille ended up in 3rd place after winning the sprint from the group behind.