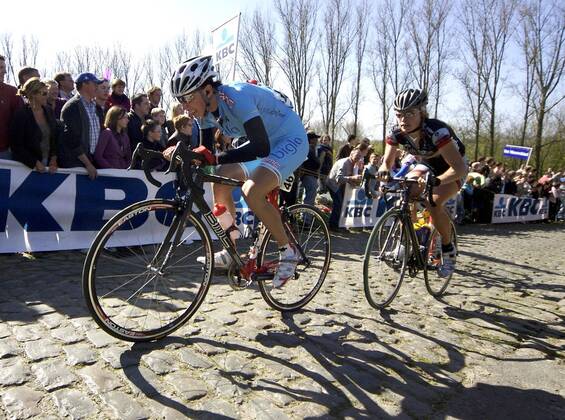 Zulfiya Zabirova earned her first international result in 1994 when she took 3rd place in the Individual Pursuit at the World Junior Track Championships in Italy. The following year she placed 2nd in her national TT championships and 8th in the World TT Championships. Aged 23, she won Olympic gold in the time trial at Atlanta. Her all-round racing ability was starting to come through as well with 2 stage wins at the Grand Boucle to finish 6th Overall and 3rd at the Tour du Finistere.

She became national champion road champion for the first time in 1997. Zabirova again won a pair of Grand Boucle stages, improved to 1st in the Tour du Finistere and began a run of 3 straight wins (and 4 overall) in the Chrono des Nations time trial race. She missed out on a first World Championship in the time trial though by just 0.85 seconds to Jeannie Longo. Zabirova then finished 2nd again the follow year by a extraordinarily tiny margin. Just 0.37 seconds behind Leontien Van Moorsel that time. There was another customary Grand Boucle stage win as well as 4th Overall at Thüringen Rundfahrt.

1999 saw Zabirova win 3 stages on her way to 5th place in the Giro Rosa as the reign of Fabiana Luperini ended. The classics were raced well too, solid finishes of 23rd and 27th in the Primavera Rosa and Flèche Wallonne. She finished highly in the Grand Boucle for the first time in 2000, finishing 5th Overall with 2 more stage wins. She also retained her Tour de Suisse title. Zabirova finished a relatively disappointing 12th in the bid to retain her Olympic TT title though.

2002 saw Zulfiya Zabirova win the World TT Championship finally. Her ride in Zolder saw her beat the Swiss pair in 2nd and 3rd by only a handful of seconds. She won the Overall at Thüringen Rundfahrt and yet another pair of Grand Boucle stages. 8th at Trofeo Alfredo Binda was a new best in the classics. The following season saw Zabirova win her first classic – the Primavera Rosa. She attacked and won the race solo by 34 seconds. She also scored a top-10 result at Amstel Gold too.

2004 was her best classics season. Managing to win the first ever Tour of Flanders with a solo attack on the Muur van Geraardsbergen. She also retained her Primavera Rosa title with yet another solo attack, this time beating Mirjam Melchers by 26 seconds. Those results put her high up in the year-long Women’s World Cup competition but she barely scored in other races and finished 5th. The season finished with another podium in the Worlds TT, this time in 3rd place.

Zulfiya Zabirova changed nationality from Russian to Kazakh for the 2005 season and signed for the Bigla team. She cited the better training conditions in Kazakhstan but also that it was nearer to her home of Uzbekistan, which Zabirova has a complicated relationship with. The move saw her begin an undefeated run of 4 straight national road race and time trial wins. Despite winning a Giro Rosa stage in 2005, it was a fairly quiet year, dropping back to 6th place in the Worlds.

2006 was Zabirova’s last peak year of form as she won the Overall at the Trophée d’Or Féminin, a race that took on the mantle of being a women’s Tour de France. She also won the World Cup race of the Tour de Berne by 2 seconds ahead of Oenone Wood and finished 4th in the Tour of Flanders, a minute behind Mirjam Melchers. 2007 felt like Zabirova had passed her peak, despite a close 2nd place at the Tour of Flanders behind Nicole Cooke. There were the national titles but she finished 12th in the Worlds TT, her lowest position in her career.

Her final season in 2008 saw her win 2 stages at the Tour de l’Aude and finishing 2nd by less than a second (a running theme) in the Giro Rosa. Zulfiya Zabirova bowed out with 10th at the Olympic road race and 9th in the Olympic time trial in Beijing.

The 2004 Tour of Flanders was the first edition of the race. Strong attacks early on by the super-strong combination of Leontien van Moorsel, Mirjam Melchers and Hanka Kupfernagel managed to thin out the peloton. When the race hit the cobbled slopes of the Muur van Geraardsbergen, Zulfiya Zabirova was able to power away from her rivals. She only had a gap of around 15 seconds. However she used her strong time-trialling ability to maintain the gap over the Bosberg. Keeping the chasers behind her for the final 16km.

By the time the race reached the finish at Meerbeke, Zabirova only had an advantage of 4 seconds. Just ahead of the sprinting Trixi Worrack who beat Van Moorsel and Melchers. The main peloton rolled over the line a full 80 seconds after Zulfiya Zabirova completed her win.