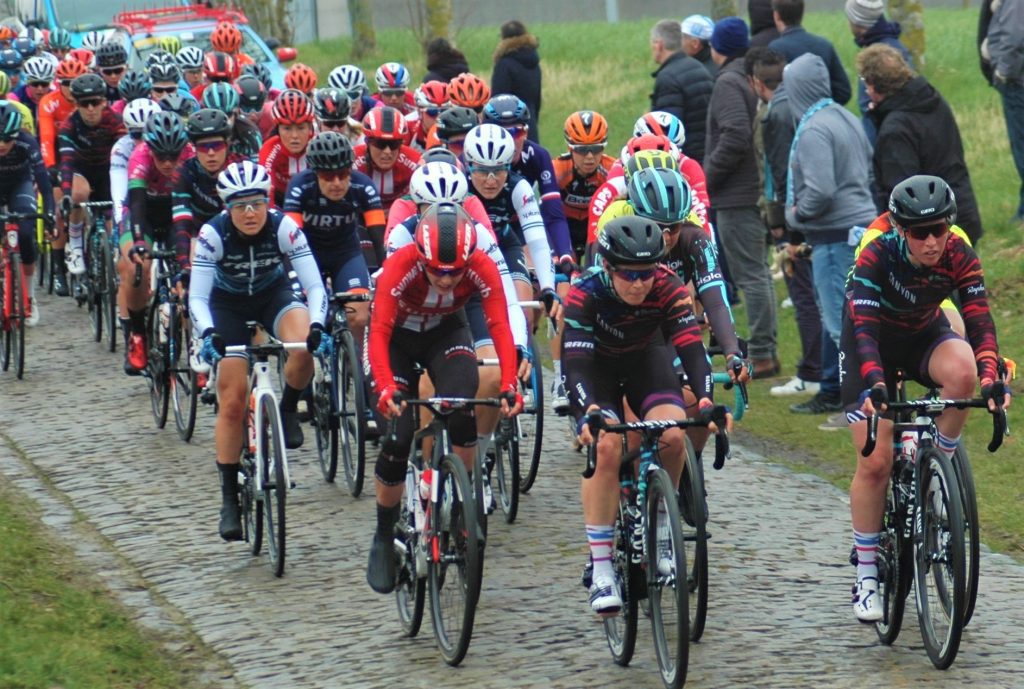 It’s been a running joke all Winter, the 2020 cycling season starts with Omloop Het Nieuwsblad. All that Australian stuff like the Cadel Evans race were all just pre-season friendlies. Designed to prepare riders for this race (and all the others this year!). I don’t necessarily subscribe to that view. However, the Spring Classics are a series of the most exciting races in the season. Including the men’s calendar, it feels like there’s a big race every 3 days from now up until mid-April. Omloop Het Nieuwsblad itself is on 29th February – a leap year edition! The day after this year’s Omloop Het Nieuwsbald sees the follow-up race of Omloop Van Het Hageland.

The first European race of the season sees the usual bit hitters out to play. The hilly profile means we shouldn’t see a bunch sprint finish. Last year, Chantal Blaak (now Van den Broek – Blaak) managed to escape from the pack. She won by just over a minute in Ninove. The key pair of climbs near the end of the race are the legendary Kapelmuur and the Bosberg. A rider can easily attack and get a gap on these climbs. Then they can use the slight downhill run to the finish in Ninove to stay away from the chasers.

The now-infamous neutralisation of the women’s race overshadowed the result somewhat. This was because they were about to catch the men’s peloton. A pinch point in the route timings meant the ’10 minutes behind schedule’ men held up the women’s race. Nicole Hanselmann was in a solo break and had to be stopped. She was allowed to restore her lead but now out of rhythm, she was caught fairly quickly. I would be surprising to see a repeat of this in 2020’s race!

Starting with last year’s winner, we have Chantal van den Broek – Blaak. She got married over the off-season, so I need to come up with a shorter version of her new name! She’s not raced so far in 2020 so we’ve no indicators of her form. However, this time last year she was strong enough win with a big solo break. She’ll be supported by Anna van der Breggen who already has her first wins of 2020. She won a stage and the GC at the Setmana Ciclista Valenciana this week to show off her form. Both Boels riders will be looking to attack. Anna van der Breggen has now been removed from the startlist.

Annemiek van Vleuten is always a contender and was 4th at last year’s Omloop Het Nieuwsblad. She’s another that hasn’t raced so far in 2020. Ale’s Marta Bastianelli had a great opening weekend last season. She won Omloop Van Het Hageland and finished 2nd place here too. That helped set up a stunning run of results that saw her not finish outside the top-10 of a race until late-May. She’s already won Vuelta Ciclista Valenciana in 2020 too. She’ll want to go one place better in this year’s Omloop Het Nieuwsblad on her new team.

Canyon SRAM have the pair of Katarzyna Niewiadoma and Elena Cecchini. They both finished in the top-10 in last year’s Omloop Het Nieuwsblad. Niewiadoma is the better climber of the two. So she would be more likely to make an attack stick on the Muur van Geraardsbergen or the Bosberg. Elena Cecchini will find herself as the go-to option if the race comes down to a bunch sprint. As it did for the chasing pack in 2019.

There is no Marianne Vos after she required surgery a month ago. CCC will be fully behind Ashleigh Moolman and their new signing Soraya Paladin. Moolman has spent the first part of 2020 racing at home in South Africa. Where she became national road race champion for the 6th time in her career. She got a little bit swamped sprinting in the chasing pack at 2019’s Omloop Het Nieuwsblad, a smaller bunch suits her more. Moolman is out with flu.
Soraya Paladin had a breakout year last season. She performed strongly at stage races in particular but also had a solid spring classics campaign too. She’ll be the Plan B but potentially a better option in a sprint than Moolman.

FDJ has their new signing for 2020, Cecille Uttrup Ludwig who had a great set of 2019 classics results. She’s yet to have a high placing in the 3 editions of Omloop Het Nieuwsblad that she’s raced so far and didn’t race it last year. It’s probably best to think of this race as more of a warm-up for other future races. Uttrup Ludwig is another flu victim
Her teammate Stine Borgli had her breakout season last year. After racing for smaller teams and the Norwegian national team, FDJ signed her in August. Where she went on to finish 3rd Overall in the Tour of Scotland and 6th in GP de Plouay. Borgli was 15th in last year’s Omloop Het Nieuwsblad racing for Keukens Redant and will want to do even better this year.

Trek have their usual set of strong riders. 2017 Omloop Het Nieuwsblad winner Lucinda Brand is coming off a strong cyclocross season, so should have racing legs already. Ellen van Dijk has always in contention here but has never won this race. She has 5 top-6 results at Omloop Het Nieuwsblad. Finally, there’s Elisa Longo Borghini who is also remarkably consistent here too. She’s finished in the top-20 on 7 editions of the race, with the best result of 5th. All 3 riders have a realistic shot at winning.

Team Sunweb’s best chance probably lies with Floortje Mackaij who was 10th in last year’s race. She tends to get her best results in solo breaks or sprinting in very small groups so will be hoping for a hard race. If it does all stay together until the end, the team’s focus will switch to Coryn Rivera. She was 5th in the bunch sprint finish here in 2018.

Bigla’s Leah Thomas finished 20th in last year’s race. She finished in the lead group but found herself outsprinted by most. She’s coming off a 4th Overall at the Setmana Ciclista Valenciana this week, which also included a stage win too. Lotto has the 2018 winner of this race in Christina Siggaard. She followed it up with a 9th place in last year’s race too. She won the 2018 edition by winning the big bunch sprint. Naturally, she will be another rider hoping that everyone is still in a big peloton at the finish line.

It’s tough to completely ignore Lorena Wiebes but the hills should prevent her from being there at the finish and she was 56th last year. A gentle race that sees a bunch finish though and she’ll find herself in contention again. Trek’s Ruth Winder had a great start to the 2020 season in Australia. She won a stage and the Overall GC at the Tour Down Under. As well as finishing 8th in the Cadel Evans Great Ocean Road Race. She’s an in-form rider but the strength in numbers that Trek has in this race means she might find herself working for others.

Boels also have Jip van den Bos who finished 3rd in last year’s race, outsprinting most of the riders in the chasing pack. If it wasn’t for the star quality of the two main riders on her team, she’d be a definite contender in her own right. She’s been on the podium of a Setmana Valenciana stage this year too. If it’s a big bunch sprint again, Van de Bos will be the team’s best bet

Emma Norsgaard outsprinted Van den Bos to take that stage. She was also 2nd in the sprint from the bunch a couple of days later. She’s another hoping that this race ends up in a bunch sprint. She will probably find herself dropped on the hills if the race is hard.