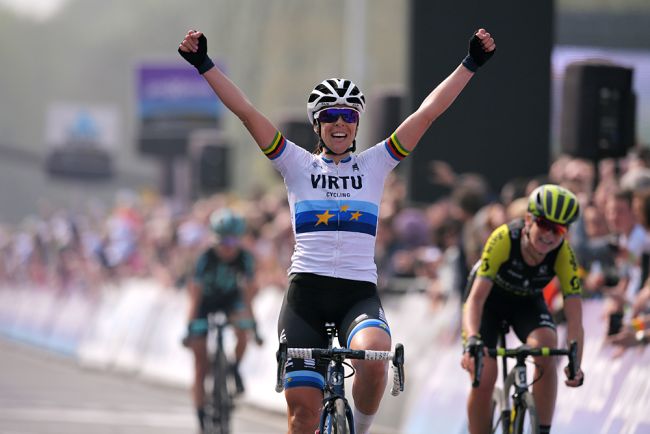 The start of the women’s spring classics season diverts from the men’s calendar on just the 2nd day of racing. There’s no women’s Kuurne Brussels Kuurne, so instead, they race the Omloop Van Het Hageland. Leaving the area of Flanders where Omloop Het Nieuwsblad is raced, the women’s peloton is transported east by 80km.

Omloop Van Het Hageland has been on the pro calendar since 2011 and holds a 1.1 status – the same as Omloop Het Nieuwsblad. A relatively flat parcours sees the odd cobbled section, which will be tough in the poor recent weather. The riders than join onto a finishing circuit where the Roeselberg has to be conquered 5 times. The climb itself isn’t too tough, just 0.7km long at an average of 4.7%.

Last year’s winner Marta Bastianelli is an obvious place to start, especially as she won in 2016 too. She got a solid mention in this year’s Omloop Het Nieuwsblad preview but with good cause. So far in 2020, Bastianelli has a 100% win record. The Vuelta Ciclista Valenciana was successfully won, beating others in a big bunch sprint. That’s a good omen for this race.

FDJ have Cecilie Uttrup Ludwig in their line-up, but unless she gets into small bunch her teammates have a better chance. Stine Borgli is racing Omloop Van Het Hageland for a major team for the first time. Previously she’s finished 15th and 19th. With better team support now, she could find herself finishing higher this year. Eugénie Duval is also in the mix. She finished 6th in last year’s race after getting on the right side of the gap. She’s a useful sprinter but the smaller the bunch, the better she’ll do.

There’s no Annemiek van Vleuten for Mitchelton-Scott in Omloop Van Het Hageland. The combination of Gracie Elvin and Sarah Roy will be their best bets. Elvin sprinted to a 4th place in the Tour Down Under earlier this year. She was also 5th in this race last year too and it will be one she’ll be targeting in 2020. Her teammate Sarah Roy was in the 2nd group to finish last year and was 20th. Previous years have seen her finish 3rd and 7th. If it’s a bunch sprint, the odds will swing towards her.

Trek once again have a trident of options. Their main sprinter option will be Lotta Henttala (formerly Lepisto). She’s finished 2nd, 3rd and 4th in Omloop Van Het Hageland, so is just missing a 1st place! She’s started the season well with a 2nd place at the Tour Down Under and then 14th at the Cadel Evans Race. Then you’ve got the same pairing as at Omloop Het Nieuwsblad. Ellen van Dijk is a former winner of this race, winning in 2018. She won that race with a solo break and that’s probably her best chance again. Elisa Longo Borghini used to do very well in this race but her last top-10 finish is now 6 years ago. Very early on in her career (2012), she finished 3rd place. She’s very much the 3rd option for the Trek Segafredo team.

Lotto’s Christina Siggaard finished in the main bunch last year in 9th place. In 2018 she was 8th in the big bunch sprint finish too. The last 2 years, this pair of opening races at the start of the spring classics have been her target races. Teniel Campbell will be representing Valcar in the spring classics for the first time after moving from the WCC Team. She’s already off to a good start in 2020. She sprinted to 3rd place at Vuelta CV Feminas and then a 5th place (3rd in the main bunch) stage finish in Setmana Ciclista Valenciana. She’s another for whom a big bunch finish would be good news.

A race with an expected sprint finish cannot avoid mentioning ParkHotel Valkenburg’s Lorena Wiebes. After some off-season legal battles and Wiebes saying she didn’t want to race for the team, everything was eventually resolved. Wiebes won the sprint in the 2nd bunch last year but that was for 18th place. The Roeselberg will need to conquered successfully and any escapees brought back but if the bunch is together, Wiebes in the favourite. ParkHotel Valkenburg also has a second option in Romy Kasper. She’s twice finished in the top-15 here but had a quiet Setmana Valenciana this year.

Someone who didn’t have a quiet Setmana Valenciana was Emma Norsgaard. She won a stage and finished 4th in another one. This will be her first Omloop Van Het Hageland. However, if she can manage to stay in touch on the bergs, she will be in with a chance of sprinting to a good result.

Bryony van Velzen is a sprinter for new team, Ciclotel after moving from Doltcini-Van Eyck in the offseason. She hasn’t raced Omloop Van Het Hageland for 3 years but DNF-ed her previous 2 attempts. Her sprint to 10th place in the Vuelta CV Feminas this year shows her potential.

FDJ will also have Brodie Chapman who no doubt will put in an attack and try to go solo. She’s had a good start to 2020 with an epic break in the Tour Down Under thwarted with just 2 corners left in the stage. She followed this up by winning the Race Torquay and finished 10th in the Cadel Evans Race. Hitec Products also have someone off to a good start in 2020. Lucy van der Haar won a stage and the GC at the recent Dubai Women’s Tour. She sprinted consistently with a 1st, 2nd, 3rd and 6th place. The 3rd place was on an uphill finish to Hatta Dam so the Roeselberg shouldn’t pose too many issues.

Finishing with a pair of riders who have never done this race before. NXTG’s Charlotte Kool has the potential to be the next Dutch sprinter to come off the conveyor belt. She was 6th in a stage of Setmana Valenciana last week, just 1 spot behind Teniel Campbell. It will take some luck but she has the potential. 2019’s Rutland Melton winner Emily Nelson will be racing for Isorex No-Aqua. It’s been a while since she’s raced in Belgium but she got good results in 2017. Back then she was 12th in Omloop Van Borsele and 8th in Trofee Maarten Wynants. It’ll be interesting to see how she fares.