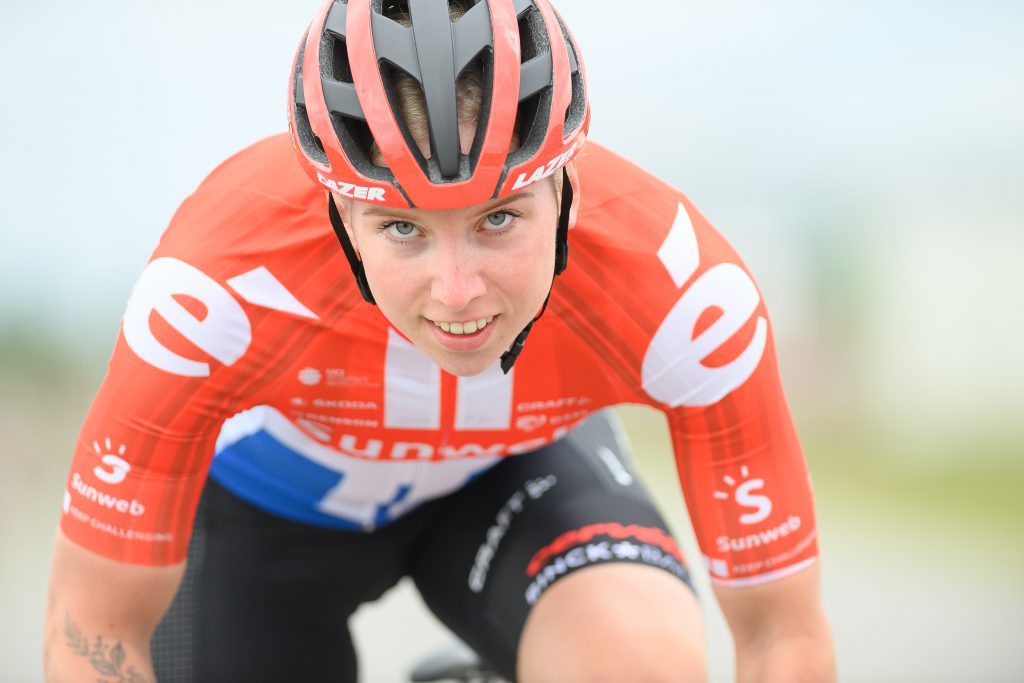 It’s been a busy women’s cycling transfer season heading into 2020. A few teams have folded or merged and new teams have sprung up in their places. A number of big riders have had to move as a result.

The biggest transfer drama of 2020 hasn’t actually seen a transfer take place yet. Lorena Wiebes was reported to be unhappy at ParkHotel Valkenburg and there were strong rumours that Team Sunweb wanted to sign her. Wiebes signed a contract extension at ParkHotel Valkenburg in the middle of the 2019 season. [Wiebes moved to Sunweb on 1st July 2020]

ParkHotel Valkenburg, as a result, didn’t want to just release her and negotiations between the team and the rider ended up breaking down. Wiebes has now said she doesn’t want to ride for the team and risks not riding at all in 2020 as a result. In the recent Dutch national track championships and a cyclocross race, Wiebes wore a non-team jersey. The team and Wiebes will find themselves in court soon too.
It’s already been an interesting saga with no clear and obvious resolution yet.

Really, this is just a reversal of Bastianelli’s transfer this time last year. She left Ale-Cipollini to join Virtu and after the closure of Virtu has rejoined the newly merged Ale BTC Ljubljana team.

Bastianelli had a great 2019 season at Virtu. She won 11 times over the year and finished a further 9 times on the podium too. The highest-profile of those wins was the women’s Tour of Flanders in April. She’ll also be sporting the Italian national colours in 2020 after winning the national championships.

She won the World Championships way back in 2007 but 2019 was a career year. We saw Bastianelli move from being a regular challenger to a consistent winner, especially in the Classics. With rumours surrounding Van Der Breggen’s longevity in professional cycling, Bastianelli can stake a claim in 2020 to become the best one-day racer in the women’s peloton.

After 3 years at Team Sunweb, Lucinda Brand signed a 2-year deal to join Trek-Segafredo in 2020. She’s been a consistent racer the last few years, even if not necessarily winning too often. With that in mind, she’s still a top-notch addition to the Trek-Segafredo team.

2019 saw Brand win the mountains classification at the Boels Ladies Tour, the points classification at the Madrid Challenge and a World Championship gold medal in the mixed time trial. What impressed most though was the consistency across many different races. She finished 16 times in the top-5 across the season.

Brand is a particularly good time trialist, so many of those results were in prologues or time trials. It also meant she got strong Overall placings where that strength came into play. 2nd Overall at the Madrid Challenge and 4th Overall in the Boels Ladies Tour are good examples. 2020 will see her add to an impressive team time trial setup at Trek-Segafredo and the chance to race for herself too.

After a breakout year in 2017 and a slightly quieter year in 2018, 2019 saw Uttrup Ludwig back to some of her best form. She won the GP de Plumelec and the mountains classification at the Tour of Scotland as well as strong performances in some of the highest-profile races.

Podium finishes at some of the biggest races, including Alfredo Binda, Tour of Flanders and La Course were excellent results. 5th at Strade Bianche, 6th at Amstel Gold and 8th at Fleche Wallonne early in the season were also a sign of things to come. There were rumours she was unhappy at Bigla so it’s no surprise to see her on the move for 2020. Now on a team with less climbing competition, she should be an undisputed leader in the biggest races.

Koppenburg has moved to Bigla-Katusha to fill the gap left by Cecilie Uttrup Ludwig. She’s not had quite the same sort of one-day race success but when it comes to mountain climbs, Koppenburg has the chance to develop into a star. It’s also a bit of a homecoming, Koppenburg raced for Bigla between 2015 and 2018.

She won the queen stage of Setmana Ciclista Valenciana on her way to the Overall victory in 2019. She also finished 2nd Overall to a dominant Marianne Vos in Tour de l’Ardeche. Finishing 4th Overall at the now ‘on hiatus’ Tour of California again shows GC climbing talent.

With a new team, Koppenburg has the chance to have a breakout Women’s Worldtour win in 2020.

Soraya Paladin announced herself in 2019. She supported Marta Bastianelli well, managed to win 5 times herself and also finished on the podium another 13 times. She took results at all levels of racing, including the Giro Rosa, Liege Bastogne Liege, Amstel Gold and the Emakumeen Bira.

Showing herself to be a superb one-day racer and now is just missing that one signature win. Moving to the stronger CCC-Liv team will give her opportunities. Plus having the likes of Marianne Vos and Ashleigh Moolman-Pasio to potentially support her to race-winning positions will help too.

Garcia is another rider who had their best season in 2019. She only won 2 mountain classifications but finished consistently highly in GC standings. 2nd at the Tour de Yorkshire, 3rd at Vuelta a Burgos, 5th at Emakumeen Bira and 6th in the Tour de l’Ardeche.

A definite climber, her Tour de Yorkshire result also showed her capable of strong one-day race results in the future. She helped explode the lead group and worked with Marianne Vos and Soraya Paladin to finish in a 3 woman lead group. She also has the potential to improve on the 10th she got at Fleche Wallonne this year on her new team.

Anna Henderson has had quite a year. At the start of 2019, she was racing domestically for Brother UK-Tifosi and dominating town centre Tour Series crits, like Redditch. She was picked for the Team GB team at the European Championships in August. Late on in the season, she was signed by Team TIBCO and able to take part in more international races than before.

She was 2nd in the National Champs, repeatedly 2nd in both of the Tour de Bretagne and Kreiz Breizh Elites Dames and 3rd in the World Champs mixed relay for the GB team. At just 21 years old and already at the highest level of women’s racing, it’ll be interesting to see how she does on a top team in 2020.

Trinidadian Teniel Campbell had a good 2019 racing for the WCC Team. A team made up of riders from generally non-traditional cycling countries to give them a pathway to elite women’s cycling. She won stages in the Kreiz Breizh Elites Dames and a stage of the Tour of Thailand on her way to 2nd Overall. She was also impressive racing in Belgium with a pair of 5th places at Nokere Koerse and the Flanders Ladies Classic. The women’s pro peloton isn’t particularly diverse but Campbell is trying to change that.

Irish National champion Alice Sharpe is also making the step up from the WCC Team to the newly created Team Ciclotel. She was another to do well in the Kreiz Breizh Elites Dames, finishing 7th Overall, 4th in the Points standings and 2nd in the Mountains classification. It’s good to see the intended pathway to bigger, better things from the WCC Team working in action and providing a stepping stone for riders.

One transfer that would have been on this list was the move of Sofie De Vuyst from ParkHotel Valkenburg to Mitchelton-Scott. She had a strong 2019 season, winning Brabantse Pijl.

Mitchelton-Scott suspended her pending the result of the investigation into a positive doping test. At of the time of publishing this post, De Vuyst remains suspended.