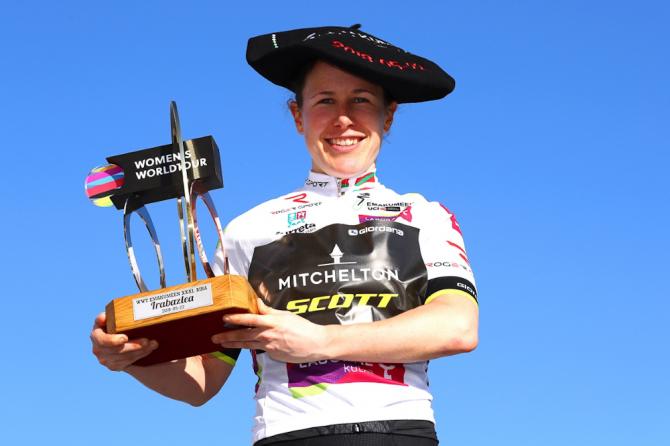 The Emakumeen Bira is one of the oldest continually running Women’s stage races. It’s taken place each year since 1988 in the Basque region of Spain. For 2019, the time trial is gone – replaced instead with more climbing.

The first stage is lumpy but expected to finish in a bunch sprint. The start of the 2nd stage has two decent climbs but their positioning early on in that stage may see the race come back together by the end. The 3rd Stage is also lumpy but the steep climb to the finish will definitely create some time gaps. The final stage is the queen stage with 4 major climbs and the final summit is only 16km from the finish line – encouraging attacks.

The obvious favourite at this year’s Emakumeen Bira is Annemiek Van Vleuten. With her erstwhile rival Anna van der Breggen busy winning the Tour of California this week, van Vleuten is free to use her world’s best climbing ability to win this race. Stages 3 and 4 seem tailor made for her and even the finish to the 2nd stage might allow her to gain some time.
Her teammate Amanda Spratt is last year’s winner, earning herself a lovely Basque hat (that the men earn by winning San Sebastian) in the process. The new, harder parcours will probably prevent a repeat win but she will be an interesting foil for van Vleuten.

Trek’s Elisa Longo Borghini was 5th Overall at last year’s Emakumeen Bira but this year’s parcours will probably stop her getting a similar result. She’s got a strong chance though of getting a stage win in the first two stages. Her team’s GC hopes rest with Tyler Wiles. She was 11th Overall at the Women’s Tour of California this week – finishing 12th on the queen stage on Mount Baldy. That stage was a straight-up day of climbing, so Stage 4 will giver her a chance to shine.

A rider that did even better at the Tour of California was WNT-Rotor’s Clara Koppenburg. She finished 4th Overall and also 4th on Mount Baldy. Earlier on in the 2019 season she won on the summit finish of Xorret de Cati at Setmana Valenciana to take the Overall victory. Only 23 years old, she should improve on the 9th place she got here last season.
Another 23 year old climber is Bigla’s Cecille Uttrup Ludwig. She’s had an amazing classics season in 2019, finishing on the podium a couple of times and regularly finishing in the top-10. She was 11th on the Xorret de Cati stage earlier in the year but it’s results like 4th in last year’s La Course that make her a big favourite on Stage 4. Her classics form should give her more than a decent chance on Stages 2 and 3 too. Cecile has been taken off the start list.

Canyon-SRAM have Alena Amialiusik, who is a reasonable climber whose best chances will be through gain time on the first two stages. She’s been racing in Burgos this week and the stage she finished 4th on looks very similar to Stage 2 in this race. She’ll lose time on Stage 4 so her hopes of a high GC position will rest on the early stages.
In a similar boat is Ale-Cipollini’s Soraya Paladin, although she’s a better climber. She’s just won 2 stages of the Vuelta a Burgos that look like Stage 2 here. She finished 3rd in the Tour of Yorkshire by finishing 3rd on a stage very similar to Stage 1. To show she can climb, she finished 3rd on the summit finish of Xorret de Cati earlier in the season too. She’s got a good chance of finishing on the podium.

After spending most of this season racing at 1.2 level Omer Shapira announced herself with a career result of 8th Overall at the Tour of California this week. She finished 5th on the Mount Baldy stage to show off some new-found elite climbing skills. Hopefully jet lag won’t be an issue as she can become the Canyon-SRAM team leader here. FDJ’s Shara Gillow can certainly climb, finishing 13th on Xorret de Cati this season. She always does well in the Emakumeen Bira, finishing 15th Overall in 2018, 11th Overall in 2017, 12th Overall in 2015 and 10th Overall in 2014. Once again she’ll be looking to sneak into the top-10.

Movistar have the twin threat of Mavi Garcia and Eider Moreno. Garcia does well on lumpy stages but isn’t necessarily a pure climber. Stages 1 and 2 will be her time to shine. She was 3rd Overall at the Vuelta a Burgos by finishing 4th and 2nd on stages. She managed 2nd Overall at the Tour de Yorkshire by racing well into 2nd place on the final stage too. She’s got a chance of getting into the leader’s jersey after the first couple of stages.
Her teammate, Spanish national champion, Eider Moreno was 4th on the Xorret de Cati stage I keep mentioning. The time she gained there allowed her to finish 4th Overall too. She’s less good on the stages that Garcia excels at, so don’t expect to see her until Stage 4. She was 16th Overall last year but this year’s parcours suits her better.

There’s also a host of riders who won’t finish high on the overall but could do very well on Stages 1 and 2: