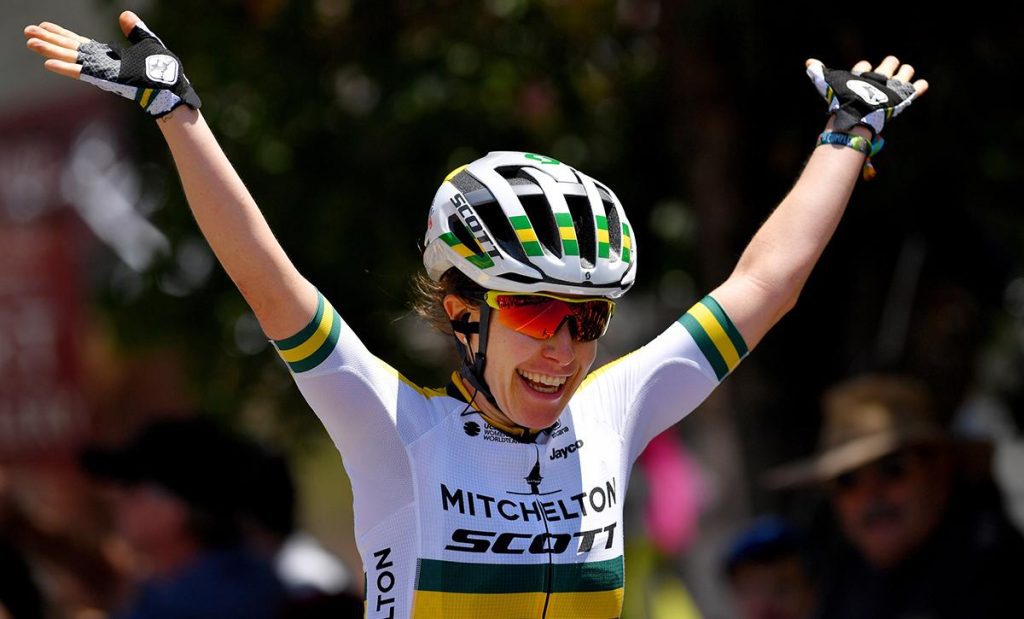 With the Women’s Tour Down Under, the start of the 2020 season is finally here! The race kicks off on 16th January and will have 4 stages in 2020. 3 lumpy stages where the main GC battle will take place and a crit style race in Adelaide on the final day.

The GC should be decided on Stage 3 where the Kywarra climb and uphill drag back into Stirling will separate out the GC contenders. There’s definitely potential for gains on the first two stages as well. Short climbs leading into descents near to the finish will reward riders that attack and take their chances.

The final day shouldn’t have an effect on the GC but will be a battle for the sprinters. No real lumps to worry about, it will be a thrash with several 90 degrees turns on the city centre route.

Women’s Tour Down Under 2020 Favourites

The new Australian national champion, Amanda Spratt is the queen of this race. She’s won the last 3 editions of the Women’s Tour Down Under with 3 stage wins too. Spratt won last year’s edition of the Tour Down Under by gapping the peloton on the uphill finish on Stage 2. There’s no equivalent in 2020 but after dominating a rolling parcours in the national championships, she’s still the favourite.
She’ll be supported by strong teammates in Lucy Kennedy and Grace Brown. Kennedy was 2nd last year behind Spratt and went on to win the Herald Sun Tour. Grace Brown put in a huge amount of work to assist Spratt’s national champs victory and finished 3rd. Both teammates could find themselves on the podium with Spratt.

Astana’s Arlenis Sierra is a big favourite too. She finished 3rd on the 1st stage last year which has a similar profile to this year’s Stage 1. She lost time on the uphill finish stage which isn’t in the 2020 route so shouldn’t have anything to worry about.

Chloe Hosking has moved to American team Rally UHC over the Winter. She’s probably more one to consider for stage wins than the Overall. She won the Adelaide crit stage last season. She also won the bunch sprint of the chasing peloton in the 2020 national championships too. Her teammate Kristabel Doebel-Hickok is a better shout for the Overall. Doebel-Hickok finished 4th Overall here last year, finishing 3rd and ahead of most on the stage Spratt gained her time. She finished in the top-10 of all but 2 stage races in 2019 but didn’t finish higher than 4th. She’s consistently strong.

Brodie Chapman has somehow not raced the women’s Tour Down Under before. She’s moved from TIBCO to FDJ for 2020 and finally gets an opportunity. She’s a strong racer on home roads with 3rd Overall in last year’s Herald Sun Tour and 6th in the Cadel Evans Great Ocean Road Race. She also finished in the top-10 in this week’s national championships.

Alexis Ryan hasn’t raced the Tour Down Under since 2017, normally starting her season in Belgium on the cobbles. That 2017 edition she was 5th Overall though. Ryan had a quiet 2019 after a breakout year in 2018. It’d be good to see her lay a marker in Australia and get back to her best.
21 year old Juliette Labous is a GC star in the making for Team Sunweb. Her breakout result last year was 11th Overall in the Giro Rosa. She usually gains time in time trials and unfortunately for her, there isn’t one at the Tour Down Under this year. A top-10 here would be a great result.

TIBCO’s Lauren Stephens was 7th Overall at last year’s Women’s Tour Down Under. Like others, she didn’t lose that much time to Spratt on the hilly stage and was consistent the rest of the race to finish high up. Stephens finished off the 2019 season in October with 10th place at the Tour of Guangxi too.

Rachel Neylan will be taking part for the UniSA-Australia team again as her new Casa Dorada team won’t be taking part. She was 3rd Overall last year. She missed the break in the national championships this year but was part of the main chasing group, finishing 16th.

Domestic team Roxsolt Attaquer will have 2 options. Emily Herfoss had a great 2019 season, finishing 9th Overall in the Tour Down Under. She backed it up with 8th at the Cadel Evans race, 6th Overall at the Herald Sun Tour and 4th at Winston Salem in the US. She also attacked out of the chasing group to finish 4th in the national championships this year. Teammate Justine Barrow was in the winning move with Amanda Spratt in the national championships – finishing 2nd. Barrow didn’t finish the 1st stage last year but went on to finish 9th Overall at the Tour of the Gila and 14th at both Winston Salem and Colorado. Both riders could find themselves in the Top-10 at the end of the week.

Trek’s Ruth Winder was 10th Overall here in 2019, 9th in Cadel Evans and 7th at the Herald Sun Tour. Winder clearly likes racing early season in Australia. She finished the 2019 season strongly too with 6th Overall at the Belgium Tour and 13th at the Madrid Challenge. She can climb and sprint so none of the stages this year should trouble her. Her teammate, the newly married, Lotta Henttala (formerly Lepisto) is someone else that could do well. Particularly on the flatter stages that might see a bunch finish.

Finally, Ale BTC Ljubljana has Anastasiia Chursina who is a solid one-day racer. With no massive climbs to negotiate Chursina has the potential to mix it with the pack. Her best 2019 result was the 4th place at Alfredo Binda and if she performs that well again, she’s got the chance to win stages and do well in the Overall here.

Women’s Tour Down Under 2020 Outsiders

If Labous struggles for Sunweb, then they have the pairing of Leah Kirchmann and Anna Henderson to get results. Kirchmann is a good backup option for the Overall and would be a great rider to hunt some stages. Anna Henderson will feel at home in the Adelaide criterium stage. She’s finished 1st and 2nd the last two national circuit championships back home in the UK.

Abigail Van Twisk was 17th Overall in the Tour Down under as a 20-year-old in 2018. Now with more experience and a kinder parcours she’s got a chance to improve on that placing.

FDJ have a couple of longshot options. Aussie Shara Gillow always does well this time of year at home. She’s already finished 5th and 6th in the national championship races this year. The rolling stages will suit her more than a sprint. Those sprints will suit the young French sprinter Maëlle Grossetête much better. She’s an outside bet for a top-10 in the Adelaide Crit for me.

They all race for different teams but the young Aussie trio of Sarah Gigante, Ruby Roseman-Gannon and Jaime Gunning will be hoping to continue their great form.
Last year’s national champion Gigante won the time trial this year and made several attacks in the road race before being outsprinted by the pack. Gigante will be racing for TIBCO in 2020.

Ruby Roseman-Gannon was on the podium in the national crit race, losing out to Chloe Hosking for the win. She’ll be looking for a result in Adelaide in a similar type of race. She’ll be backing up Rachel Neylan on UniSA – Australia.

Jaime Gunning was 8th in the national champs and 10th in the time trial. Only 21-years-old she was 6th Overall in the Tour Down Under last year, winning the Youth Classification. She should find herself snapped up by a bigger team than the domestic Specialized Women’s team at some point this year.