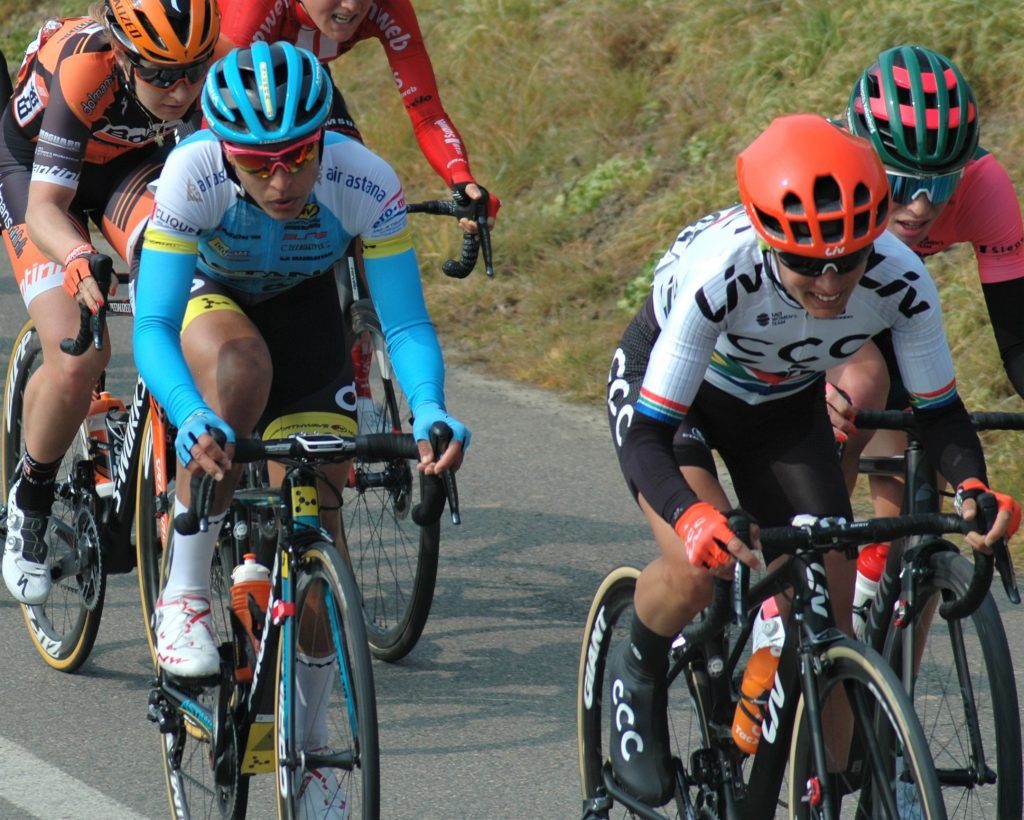 The Women’s Tour of Guangxi isn’t just the last women’s WorldTour race of the 2019 season, it’s the last women’s race on the calendar. Once the race on 22nd October is over, the dust can settle and the riders can relax – those with confirmed teams for 2020 that is.

Should also add there’s a lot of fluidity in the start list for this race – changes are distinctly possible.

There’s been a men’s Tour of Guangxi for a while but the women’s race only saw its first edition in 2017. Few of the biggest riders make the trip over to China so the usual names aren’t on the honours board. The 2017 edition saw Maria Vittoria Sperotto win and last year’s winner was Arlenis Sierra on the same parcours as 2019.

Generally flat, a climb with 40km to go should split the pack as it did last year. As climbs go, it’s not the toughest. A two-part affair with the first just 2.1km long at an average of 5.2%, followed by 4.3km at 4.4% average. Just enough to shell out tired riders but probably not enough to be a launch platform for a single winning escapee. A reduced peloton of 30 riders contested the sprint in 2018.

Arlenis Sierra gets first billing as last year’s winner. She’s also had a strong second half of the season, winning national championships, Pan American national races, the GC at the Giro Toscana, a pair of 3rds in the Ardeche, 12th at the Worlds, 11th at the Giro dell’Emilia and 5th at the GP Bruno Beghelli last week. She was 5th at the last race in 2018 too which is a handy coincidence. She’s a strong enough climber for the hills to be no trouble and strong enough last year to out-sprint everyone else.

Ale’s Chloe Hosking has had a sparse season. The highlight of 2019 has definitely been winning the main stage of the Madrid Challenge – kinda the women’s Vuelta. She’s someone I’d be expecting a solid top-20 result from. Her teammate Soraya Paladin is more likely to get over the climbs with the front group and has a sprint of her own. Paladin finished 6th at Giro dell’Emilia recently, won the GC at the Giro delle Marche, 2nd in the GC at Giro Toscana and won the KoM jersey at the Tour of Norway too. She can do better than Hosking and make the top-10, maybe finishing very high.

Marianne Vos has been on fire recently with 8 stage wins and 2 Overall victories since the end of August. She finished 6th in the World Championships too whilst other teammates were up the road. Her 2019 season has seen her get almost back to her early 2010s-peak with big victories at La Course, Alfredo Binda and the Tour de Yorkshire. Ashleigh Moolman-Pasio had a quiet GP Plouay finishing 91st but 8th at the World Championships was a good return to form. The climb probably isn’t difficult enough for her to do really well here but she’s a great Plan B for CCC-Liv.

FDJ’s Emilia Fahlin spent 4 months of this season on the sidelines after suffering injuries from a big crash. She came back with 9th at the GP International d’Isbergues and 15th at the World Championships. It’s difficult to know exactly where her form is though after a 57th and 30th at the pair of Italian races 2 weeks ago. She’s more than capable of making the front split and getting a result.
Marta Tagliaferro was 8th in the flat sprint-fest that was the Ride London Classique back in August. Way back in May she finished 6th Overall in the Tour of Chongming Island – the race Women’s WorldTour race to take place in Asia. She’s a little bit of a long-shot as the climb could see her distanced but if she manages to climb it, she’ll be a contender.

Team Sunweb have a trident of riders that could all do well for them. Coryn Rivera is the obvious sprint hope who has been in great form since the late-Summer with 9 podiums. Particularly impressive was winning the Lotto Belgium Tour stage that included 3 climbs of the Muur van Geraardsbergen and 10th at the World Championships. There’s also the Dane, Susanne Andersen. She was 4th at the GP Bruno Beghelli recently as well as 8th Overall at the Lotto Belgium Tour. She’s quietly been getting some good results in the 2nd half of 2019. Floortje Mackaij is the 3rd rider in contention. She’s had top 10s at the Madrid Challenge and Tour of Norway recently, and 12th Overall at the Boels Ladies Tour. She’ll no doubt look to attack and create opportunities.

Gracie Elvin has struggled to finish races recently, often pressed into domestique duty for Annemiek van Vleuten. She can climb fine though when racing for herself . She’s been 4th in La Classique Morbihan, 11th at Dwars Door Vlaanderen and 13th at the Tour of Flanders earlier in the season shows what she could do in Guangxi. Alison Jackson has been snapped up by Team Sunweb for 2020 after a great 2019 season. She finished 16th in both the World Champs and the Boels Ladies Tour recently. Her peaks in the second half of the season have been finishing 2nd Overall at the inaugural Tour of Scotland and 1st at the White Spot / Delta road race in her native Canada. She should make the top-10 here.

Valcar’s Chiara Consonni won her first professional race in the Boels Ladies Tour recently. She outsprinted Lorena Wiebes too which is no mean feat in 2019. To prove it wasn’t a fluke, she finished 3rd in the GP Bruno Beghelli a couple of weeks ago too. This time finishing just behind Wiebes. She also finished ahead of riders like Sierra, Duval and Shekel who are racing in Guangxi. Her teammate Ilaria Sanguineti is a good Plan B option. She was 6th herself in GP Bruno Beghelli. She’s more likely to work for Consonni but could finish in the top-15 in her own right.

Anatasiia Chursina has had a fairly quiet 2019. She managed 4th at Alfredo Binda earlier in the season but then not huge amounts else. September saw her finish 3rd Overall in the Giro Toscana though, thanks to a pair of 4th place stage finishes. She’s an all-rounder who should get over the climbs fine and have a go at sprinting too.
Hannah Barnes is another with a quiet 2019, often because of working for others. 25th Overall at the Boels Ladies Tour is a good example – a decent result but not a contender. When she worked for herself, she finished 8th Overall in the Tour de Yorkshire though. She’s another who should be there at the end.

FDJ’s Eugenie Duval has a sprint, it’s guaranteed that she’ll make it over the climbs in the front group though. Her recent form is good with 13th at GP Bruno Beghelli and 6th at GP d’Isbergues. Her last WWT races saw her finish 10th in the Madrid Challenge and 5th/8th in the last 2 stages at the Boels Ladies Tour. I very nearly put her in the Favourites category as she’s not far off.

Thi That Nguyen has done well recently, winning the GP de Fourmies in September. She’s also been 2nd at Erondegemse Pijl, 4th on a Lotto Belgium Tour stage, 6th on a BeNe Ladies Tour stage and 9th in the Flanders Ladies Classic. She also likes racing in China, winning the Tour of Zoushan Island I back in May.
Dexiang Liu was the highest finishing Chinese rider last year in 14th place. I can’t find any information about her races in 2019, surprisingly not racing at Chongming Island. A genuine longshot but it’s good to have a home favourite.