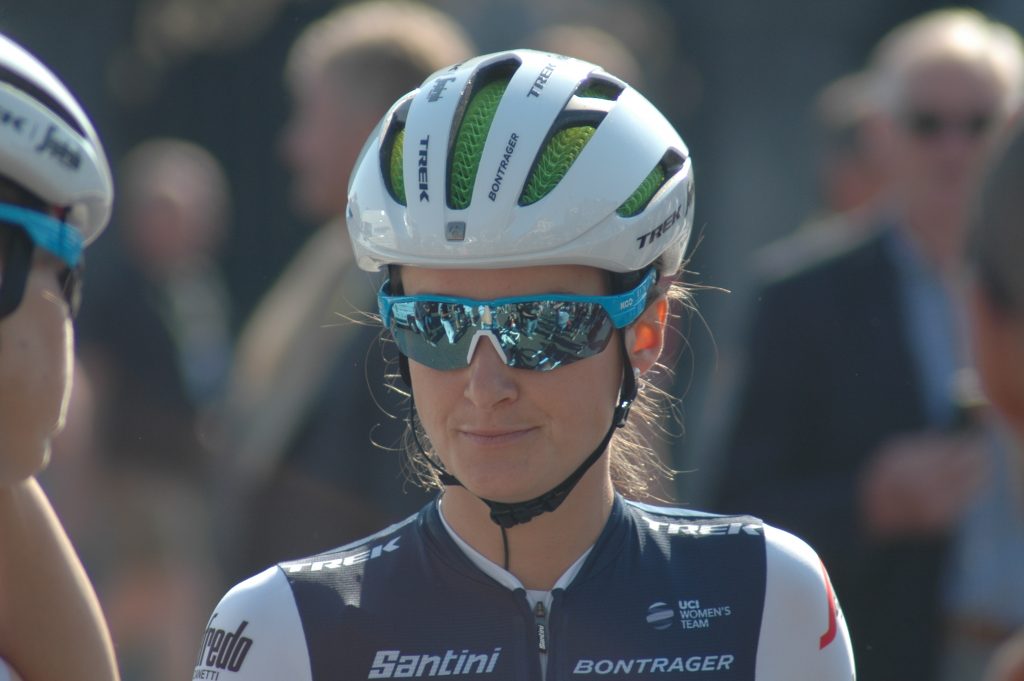 Lizzie Deignan turned professional on the road in 2008, racing for Team Halfords Bikehut before moving into Europe on the Lotto-Belisol team for 2009. The 2008 season saw her part of the Great Britain team that saw Nicole Cooke win the World Championship road race.

With Lotto-Belisol she became the National U-23 Champion and finished 2nd in the Senior Championships too. She also marked herself out as one for the future by winning the Youth classification in the Giro Rosa. Deignan also made waves early on whilst racing the track, winning a World Championship in 2009 as part of the team pursuit lineup.

After a pair of silver medals in the 2010 Track Worlds, Deignan moved to the Cervélo team for 2010 and 2011. She won 3 stages of the Tour de l’Ardèche and her biggest victory yet in a stage of the Route de France. A pair of silvers at the Commonwealth Games and the National Road Race were earned. The year finished with a great 9th place in the World Championships too.

2011 saw Deignan win her first National Championship, earning the right to wear the British bands for the following year. Only 2 other wins marked a fairly quiet season. 2012 saw Deignan breakout in the Classics, however. Lizzie Deignan won Gent Wevelgem and Omloop van Hageland in the early part of the season. Also scoring a top 10 in Omloop Nieuwsblad for the first time. Following up on her many silver medals, she finished 2nd in the Olympics road race in London and at the National Championships.

She regained the National jersey in 2013 but struggled for wins the rest of the season. A good 3rd Overall in the Holland Ladies Tour went with top-10s in the Tour of Flanders and Ronde van Drenthe. 2014 saw Lizzie Deignan become a star winning the World Cup as individual rider. She won the Commonwealth Games, Omloop van Hageland and Ronde van Drenthe. Her consistency though was impressive. She was also 2nd in all of Trofeo Alfredo Binda, Tour of Flanders and Flèche Wallonne. Plus 3rds in Drentse 8, Omloop Nieuwsblad and RideLondon GP. She got her best result so far in the Worlds with 7th place too.

She won the World Cup again in 2015. Winning the Overall at the Tour of Qatar, Trofeo Alfredo Binda, Boels Rental Hills Classic, Philadelphia Classic and GP de Plouay. Along with top-10s at Strade Bianche, Ronde van Drenthe, Tour of Flanders and Omloop Nieuwsblad. The 2015 season finished with Deignan becoming World Champion in Richmond.

Deignan continued to be at the peak of her powers in 2016. She won all of the Tour of Flanders, Strade Bianche, Omloop Nieuwsblad, Trofeo Alfredo Binda and the Boels Rental Hills Classic to cap an amazing Classics season. She also won the Overall in the Women’s Tour for the first time and came close in both the World Championships and the Olympics games, finishing 4th and 5th.

2017 was good but not quite as successful in terms of wins. Another National Champions jersey was won, along with the Tour de Yorkshire and GP de Plouay. Lots of near misses saw Deignan finished 2nd in La Course, Amstel Gold, Flèche Wallonne and Liège Bastogne Liège. She also was 3rd in Strade Bianche. Only Anna van der Breggen was able to finish above her in the World Cup standings.

Lizzie and Philip Deignan got married at the end of the 2016 season and by early 2018, Lizzie announced she was pregnant. This naturally meant she didn’t ride the 2018 season but was back a year later at the 2019 Amstel Gold Race. After a pair of solid finishes at Amstel and Flèche Wallonne, she announced her return with 7th at Liège Bastogne Liège. Later that Summer she won the Overall at the Women’s Tour for good measure.

With no real breakaway to speak of with 40km to go, attacks from the major riders began on the Molenberg with Ellen van Dijk making a move. Anna van der Breggen brought her back on the flat cobbles of Paddestraat though.

With 20km to go, Deignan briefly lifted the pace and was let go by the peloton. Gracie Elvin joined her and the pair spirited away with a small lead of 45 seconds. Elvin had orders to not work with Deignan, so kept a watchful brief. Despite a chase behind by Rabo-Liv and Wiggle, they were unable to bring Deignan back.

A brief lull took place as Deignan refused to do all of the work for Elvin. A slight rise in the road gave the launchpad for a solo attack by Deignan. Elvin was dropped and eventually caught by the peloton. Deignan held her small lead to the finish line, winning by just 29 seconds, to become the first reigning World Champion to win Omloop het Nieuwsblad. Her Boels Dolmans teammate Chantal Blaak finished 2nd.