A history of the women’s hour record cycling 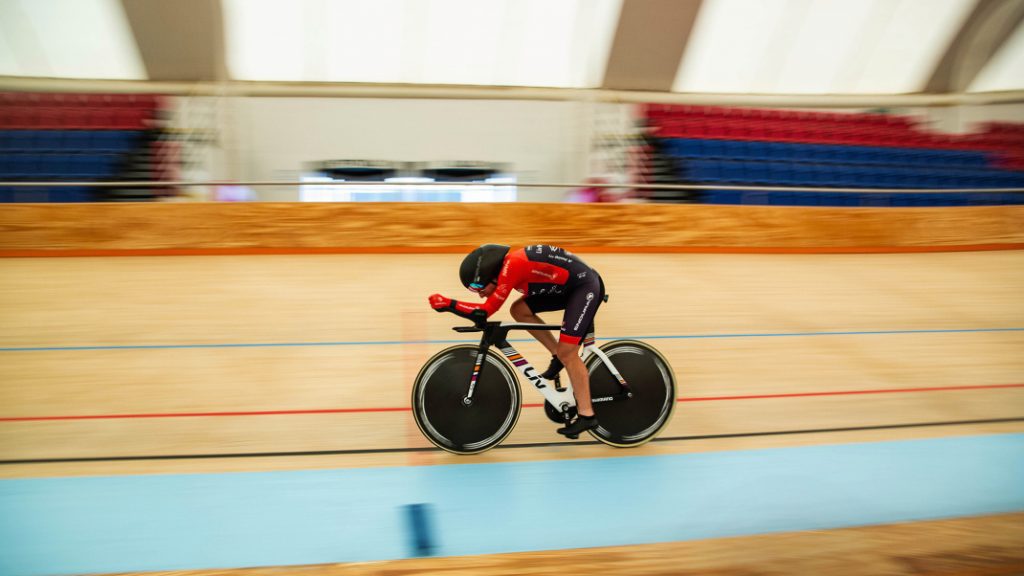 The women’s hour record is broken down into 3 distinct periods. The early period saw pioneers of women’s cycling set records that look achievable to amateurs today. The UCI began its ownership of a woman’s hour record in 1955. They set rules to be followed for records to count. Since 2014, we’ve seen the modern period. Here up-to-date bikes and equipment can be used in the pursuit of more distance.

The history of the womens hour record begins with a Mademoiselle de Saint-Sauveur in July 1893 in Paris. She set an initial distance of 26.012 miles on the Buffalo Velodrome to get the ball rolling. Unhelpfully, she punctured, also stopped to loosen her belt and finally stopped again for a drink.

Unsurprisingly, the record didn’t last long. The following month, Renée Debatz took the record from Saint-Sauveur on the same track. Without the stops, Debatz was able to push the record up to 28.019km. After setting some paced hour record attempts behind pacemakers, Hélène Dutrieu entered the competition in October 1893. She pushed the record up to 28.780km, this time using the velodrome in Lille. Dutrieu was a notable rider away from the hour record. Away from the track, he pioneered cycle stunts like the Flèche Humaine (human arrow). She would descend a 60-metre high ramp and jump a gap of 12 metres. The moto ailée or winged motorcycle stunt was dangerous enough to be banned by French authorities. She went on to become one of the female pioneers in the aviation world.

There the record stayed for the next 4 years as the paced record seemed more fashionable. It fell 7 times in those 4 years. In October 1897, Louise Roger managed to complete 34.684km on the Buffalo Velodrome back in Paris. It was her first attempt at either version of the women’s hour record. The improvement in bikes helped but mainly it was her clothing. Women riders could then now ride in closely fitted clothing, a big advantage we know today.

It then all goes a bit quiet until 1911 when Alfonsina Strada took the record. She set a new distance of 37.192km in Moncalieri near Turin. She apparently broke her own record 26 years later, at the age of 46 but I can’t find the distance she was credited with.

The women’s hour record was next broken by the competition between French women Élyane Bonneau and Jeannine Lemaire. They made continued attempts between 1947 and 1954, eventually settling on 39.735km achieved by Lemaire in 1952. The record had only improved by 2.6km in 40 years by this point.

The UCI got involved in 1955 to agree on an official record. This was completed by the Russian Tamara Novikova in Irkutsk. Her distance was 38.173km. The eagle-eyed will spot that this is less than what Jeannine Lemaire achieved in 1952. Not for the first time, the UCI moved the goalposts in unexpected ways with the hour record.

Even with attempts by Renee Vissac (38.569km) and Millie Robinson (39.719km) on the Vigorelli Velodrome in Milan, the record didn’t surpass the now unofficial Lemaire record. It took until November 1958 for Elsy Jacobs to surpass Lemaire’s distance with 41.347km. Elsy Jacobs is remembered today by the professional women’s race that bears her name.

After Eddie Merckx set a new men’s record on a velodrome in Mexico City 1972, there was a women’s hour record attempt at altitude. Just one month after Merckx, Maria Cressari set a new record of 41.471km. Barely higher than the one set 14 years previously by Elsy Jacobs.

6 years later, the dominant women’s cyclist of the age took the record. Keetie van Oosten, a double world champion on the road and 4-time track world champion set a new record of 43.082km in Munich. After this, the women hour record fell out of favour again. A period of 22 years passed until it fell next.

The new millennium saw a brief battle between Anna Millward and Jeannie Longo. Millward set a new women’s hour record of 43.501km in October 2000, using the Melbourne velodrome. A month later, Jeannie Longo went to Mexico City to make a relatively large jump up to 44.767km. A month after that, she became the first woman to break the 45km barrier with 45.094km (also in Mexico City). It was also the last women’s hour record set with a steel bike.

The last attempt on the record in that guise was by Leontien Zijlaard-van Moorsel who took the record back to the Netherlands. With record attempts now seemingly all in Mexico City, she set a distance of 46.065km in 2003.

The UCI had got itself in a muddle with the rules for the hour record with two different records running side by side. The ‘original’ hour record was ridden on a traditional bike. Whereas the ‘best human effort’ allowed the use of fancy prototypes. Interest in both the men’s and women’s hour records was waning with no attempts after 2005 and 2003 respectively.

In 2014 the UCI combined the records, keeping the separate records in the history bikes but effectively making the ‘best human effort’ rules the new normal. Just to confuse things though, the UCI used the ‘original’ hour record as the benchmark distance to beat.

The rule changes re-ignited interest in the hour record. Sarah Storey was the first woman to make an attempt in 2015. She set various records like a national record, a C5 para-rider record and a new Masters 35-39 age group record. Her distance of 45.502km wasn’t far enough to beat Longo’s 46.065km though.

The first successful attempt was by American amateur Molly Shaffer Van Houweling in September 2015. She’d attempted the record in July 2015 and passed it with 46.088km. However, she hadn’t been on the biological passport programme for a long enough time, so the distance wasn’t ratified. With that solved, in September she managed 46.273km to beat Van-Moorsel by 200 metres.

After the flurry of attempts, there was a gap until Kiwi Jaime Nielsen made an attempt in July 2017. She was unsuccessful by around 100 metres but set a new sea-level record in Cambridge, New Zealand. A couple of months later, Italian Vittoria Bussi attempted the record in Mexico but finished about 400 metres shy of the record.

In September 2018, Vittoria Bussi made a successful attempt on the women’s hour record. Coached by Custom Cycle Coaching, she’d actually made an attempt the day before. However, she pulled out after 40 minutes after falling behind schedule. The next day she managed to squeak past with a distance of 48.007km. This distance was just 27 metres further than Evelyn Stevens.

Bussi had raced professionally for S.C. Michela Fanini Rox in 2014 and Servetto Footon in 2015. After then she raced exclusively elite-level time trials. Races like the Chrono Des Nations, Ljubljana-Domzale-Ljubljana TT and the Italian National Championships.

The latest ‘attempt’ was by Joss Lowden who set a distance of 48.160km in training during February 2021. As it was set in training, it’s not considered an official attempt but shows that the women’s hour record is due to be beaten. Joss Lowden subsequently did an official attempt in September 2021. She set a new distance of 48.405km at the Grenchen velodrome in Switzerland.

The next attempt was by Ellen van Dijk with all of the support from bike manufacturer Trek behind her. Van Dijk attempted the record on the same Grenchen velodrome as Joss Lowden. The weather conditions outside the velodrome were ideal, dropping the air pressure and resistance. Van Dijk was always in control and was able to push the record up to a new distance of 49.254km. 2022 was supposed to be the final year of Van Dijk’s career, but going into the record, those plans were reversed. We could see another future attempt and the 50km barrier broken!