As final lead-out, Lizzie Deignan finishes in 8th and moves into 2nd in the general classification

Chloe Hosking knows she will not get many opportunities in Tour Féminin l’Ardèche, a hilly seven-day race held in the homonymous department in southeast France.

Capitalizing on a fantastic lead-out from her Trek-Segafredo teammates, Hosking made good on her first sprint chance in Stage 3.

“I am super stoked to get another win for the season,” said Hosking. “We went into the race with a pretty clear plan: we really wanted to try and nail our leadout,” explained Hosking. “So we did a lot of looking on Google earth, and Ina mapped it out and gave everyone a very specific role, and I feel like we executed that perfectly.” 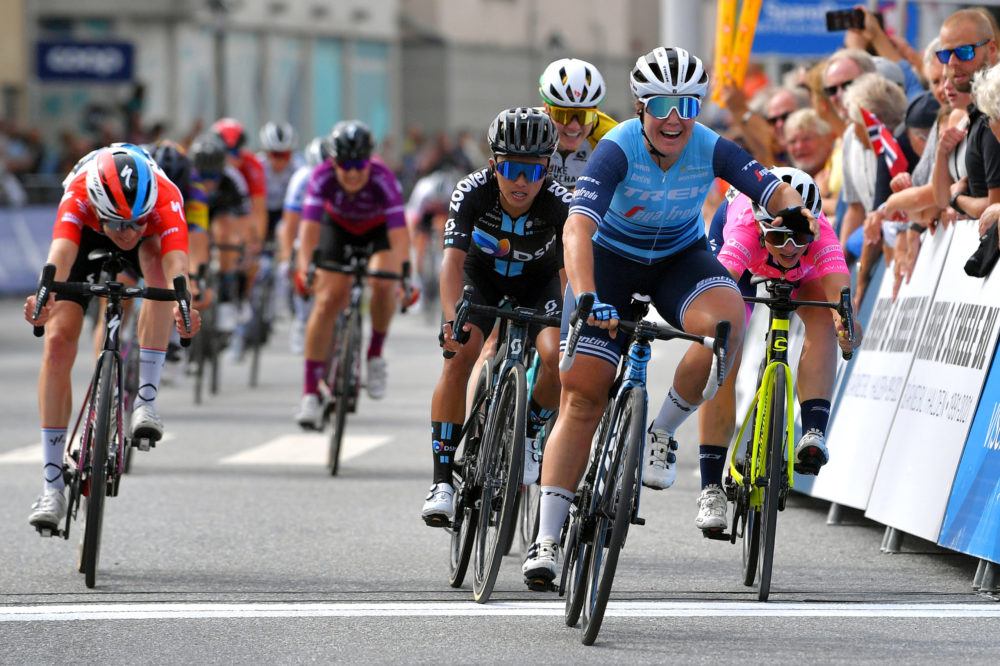 The race was animated by lone escapee Sabrina Stultiens (Liv Racing).  It was a long, brave solo attempt eventually chased back with help from 19-year-old Elynor Bäckstedt, whose effort delved out a big payment in young rider dues. “I told Elynor after the race that she might be my lucky charm; we just needed to get her to chase all day, and then I’ll win,” smiled Hosking.

With Stultiens back in the pack, the scene was set for the fast finishers and Trek-Segafredo was ready to kick their pre-race plan into action.

“So when we caught Sabrina we wanted to stay calm and not start the lead-out too early,”  Hosking explained. “We had Lauretta (Hanson) and Elynor (Bäckstedt) take the four “oldies” into a roundabout with about 2.5 kilometers to go and then we just wanted to hit it.

“Ruth (Winder), Lizzie (Deignan) and Lucinda (Brand) were in front of me, which puts pressure on a rider in itself because you are thinking, ‘oh my god, I have these superstars of the sport leading me out!’

“Ruth (Winder), Lizzie (Deignan) and Lucinda (Brand) were in front of me, which puts pressure on a rider in itself because you are thinking, ‘oh my god, I have these superstars of the sport leading me out!’

“But I was confident; I knew that I needed to get into the quite technical left-right finish in front. I knew if I could be first into the final corner with around 250 meters to go, then it would be hard for anyone to come around me. And that’s exactly what the girls did!”

A textbook sprint train allowed Hosking to grab her second win of the year.

And, as the final lead-out, Lizzie Deignan held her position to the line to finish in 8th place and moved up to 2nd in GC.

Hosking pointed to the Team’s director as instrumental in today’s win: “It’s cool to have Ina (Teutenberg, director), who was one of the best female sprinters, talk you through a sprint and break it down. It’s one of the reasons I was so excited to race on Trek-Segafredo!”