Chris Horner – Do we believe in miracles? 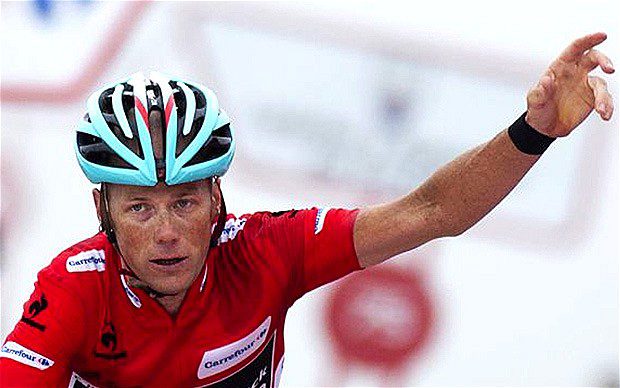 Unless you somehow missed it, anyone remotely into cycling will have noticed the media storm surrounding Chris Horner’s win at the Vuelta Espana in September 2013. Now, nearly 6 months on, many of us are still at a loss as to how a 42-year-old defied accepted wisdom and came through to win a Grand Tour.

It’s the age that has most people filled with doubt that they’ve seen a genuine clean win. The theory is that someone of Horner’s age is of the old generation and desperate for one last bit of glory (think of Di Luca in last year’s Giro) he takes a hit and hopes for the best. Having had the Armstrong case settled by Armstrong’s admission (and the admissions of nearly all the high-level American cyclists from that period) and Hesjedal‘s admission that he had doped earlier in his career, North American cycling had been very much tainted in 2012 and 2013.

Signing his first full contract at Francaise de Jeux at the relatively old age of 26 he spent 3 seasons struggling in what would’ve been a peloton full of EPO. Struggling in that climate points to Horner racing clean. Eventually Horner went back to America and raced successfully there.

Coming back to Europe with the Saunier Duval team in 2005 (who would later take a punt on a returning David Millar) before moving to the Lotto team for two years and then onto Astana.

More top tens followed in 2012 and when injury struck at the start of 2013 it seemed that it was over. Announcing his return to the peloton by coming 2nd in the Tour of Utah, 3 weeks later he took on the Vuelta…and we know what happened there. Winning two summit finishes and becoming the oldest ever Grand Tour winner.

Horner’s career reads of one of being ‘the nearly man’ for many years, clearly full of talent but either riding clean in a dirty peleton or being injured at key times. Arguably the cleaner peloton has given him the chance to shine in his later years. Where the issues for us as cycling fans lies is do we believe this result will stand the test of time?

I’m willing to accept that Horner was much less fatigued than all his rivals, he was the only one who hadn’t done another Grand Tour that year and therefore the only one for who the Vuelta was a primary focus. You had to go down to 9th place to find the next rider who hadn’t ridden in any Grand Tours and that was the also surprising result of Leopold Koenig who annouced himself to the cycling world.

It seems a particularly difficult parcours at the Vuelta, without lots of TT miles and several hilly or mountainous finishes, his rivals previous efforts and a particularly brutal Spring gave Horner the extra 5% or so that he needed to get past Vicenczo Nibali in the overall standings, simply because he was fresher.

I’m willing to give Horner the benefit of the doubt but plenty aren’t, with talk of him being the redacted Rider 15 mentioned in Levi Leipheimer’s confession within the USADA Report into Lance Armstrong and with the difficulty in which he found a new team over the Winter, before eventually signing for Lampre-Merida.

Sometimes the fans just don’t want to get hurt following the wrong guy.