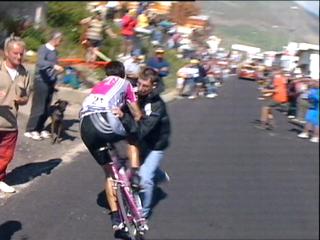 It’s a huge plus point that at the pinnacle of our sport, all you have to do to be a spectator for the race is work out where and when riders will go past and then…just turn up. There’s no entry fee and the world’s top pros are all available. Almost in touching distance for that split second as they all fly by. Sometimes, however, we do get too close…

Spectators at the Tour de France

There are many instances of spectators getting involved in the racing. The positive(ish) side of this is riders being cheered on as they’re inching their way up a gruelling mountainside. Also, our glimpse of Didi the Devil jumping at the roadside every year. Every now and again someone gets it wrong.

Possibly the most famous is Lance Armstrong vs The Bag in the 2003 Tour de France.

This one was a genuine accident rather than any blame on either the rider or the spectator. It just so happened that Armstrong managed to end up in the wrong place for once. When his brake lever caught perfectly in the handles of a carrier bag.

This tugged Armstrong’s handlebars and down he went along with Iban Mayo who was following. Once back riding, Armstrong then had his foot slip out of the pedal, almost crashing again.

This event passed into legend when Armstrong caught up with a waiting Jan Ulrich and then launched his own attack. Winning the stage (after catching a young Sylvain Chavanel) despite the fall.

The one I always remember as a kid was Giuseppe Guerini on the Alpe d’Huez in the 1999 Tour de France.

Guerini was on a solo attack having left Richard Virenque and Lance Armstrong behind (no mean feat). He was nearing the final part of the stage when a spectator decided they wanted a picture of this moment. They popped out directly into Guerini’s path causing both to fall to the ground.

This incident generally gets used as an example of what not to do as a cycling spectator. It shows how we as regular people can affect the race, although luckily in this case, not the result.

Marcus Burghardt managing to hit a dog in the 2007 Tour de France.

It took place on one of the toughest stages from Val d’Isere to Briancon in the French Alps. The peloton went through an innocuous village and into a small split near the back wandered a labrador dog. One rider avoided it but Marcus Burghardt managed to hit the dog square on the flank. It instantly snapped his front wheel in half as he went over the handlebars onto the road.

The dog gets knocked off its feet and has the bike land on him. However, appears completely unhurt by the ordeal and potters off bemused before its owner spectator appears. Burghardt as well appears relatively unhurt, just a couple of scratches and with a new wheel gets back to racing.

I’ve hit a dog before now, admittedly at lower speeds and definitely not the smartest dog as it turned around back into my path. I’m just glad I didn’t have those carbon wheels!

The first real stage of the 1994 Tour de France (Chris Boardman had won the prologue the previous day), saw an almighty crash whilst sprinting for the line. Policemen lined the barriers and one decided to take a photo from his position. He didn’t see that Belgian national champion Wilfried Nelissen was heading right for him. Nelissen hit the policeman at full speed, taking down Laurent Jalabert behind him.

Both riders were forced to abandon the race as a result of the crash.

Having got himself into the winning breakaway of the 2013 Paris Roubaix. Riding with Fabian Cancellara and Sepp Vanmarcke, Stybar was right in the mix for winning on his Roubaix début as the race went over the Arenberg. On a key stretch of brutal pavé, the Carrefour de l’Arbre, with lots of spectators and with the riders switching between the left hand and right-hand edges of the ‘road’.

Stybar effectively took a shoulder check skewing him across the pavé and nearly into the crowd on the other side of the road. He went flying onto his back. In the time it took him to clip in and get back up to speed the other two riders were gone and so were chances of victory.

In fairness to the spectator, this is a bit of an odd race. The riders all want to ride on the gritty flat bits at the side of the road rather than waste energy struggling in the middle which they are in every other race. Riders hunt out these bits of non-pave which in theory is where you have to stand as a spectator to watch them!

Spectators at the Tour of Flanders

Philippe Gilbert had escaped off the front, launching a solo attack with 55km to go. 3 key chasers were working together to close down the gap. They were Oliver Naesen, Greg van Avermaet and Peter Sagan.

On the Oude Kwaremont, Peter Sagan managed to clip a jacket that was hanging on the barriers. It wrenched his handlebars and he clipped the feet of the barriers. The jacket then caught Oliver Naesen’s bars and he went down too. Greg van Avermaet crashed into Sagan as he hit the cobbles.

The crash disrupted the chasing efforts and Philippe Gilbert was able to stay away to win his maiden Tour of Flanders.

There’s definitely a load more, a couple of cars have got onto courses and in the 2019 season someone used a zebra crossing in front of a race…let me know of any obvious ones!