Flashback to the 1999 Tour de France 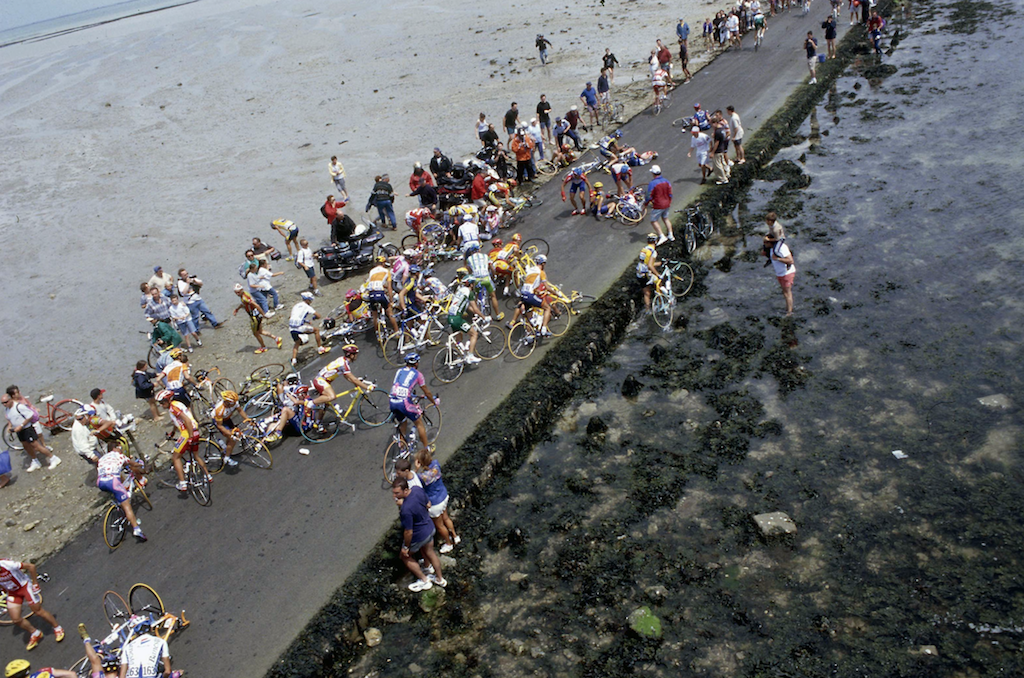 1993 World Champion Lance Armstrong was returning to the grandest stage of all after his recovery from cancer. A 4th place in the 1998 Vuelta made him one of the favourites for the 1999 Tour.

The Ile de Noirmoutier is a small island off the West of France, popular with tourists due to a temperate climate. The Tour de France has paid it several visits, kicking things off there in 2005 with a prologue (won at the time by David Zabriskie) and in a neat link to this year’s Tour, 2018 as well.

Since 1971, there’s been a perfectly good bridge between the Ile de Noirmoutier and mainland France but in 1999 they decided to use the bridge to cross over to the island, have a look round and then use the Passage du Gois to leave the island.

The Passage du Gois is a tidal causeway that is completely covered by water twice a day at high tide. Cars regularly drive over it between set times of day, with those leaving it late having to be brave (or foolhardy) to make it across. In 1999, the Tour de France raced over it during Stage 2 and whilst the rising tide wasn’t a problem, the effects of it were.

The road surface was very very slippy and ultimately a crash happened with 25 riders hitting the deck. Swiss rider Alex Zülle had been a pre-race favourite but got caught up in the crash and lost 6 minutes on the day – he ended up finishing 7 minutes behind ‘winner’ Lance Armstrong, but such was the US Postal rider’s domination this was good enough for 2nd place.

Despite this the Tour de France returned in 2011, only this time it was at the start of the stage and neutralised behind the race director’s car.

Giuseppi Guerini vs. the Spectator

With a knee injury sidelining team-leader Jan Ullrich, Team Telekom’s aims were to ensure sprinter Erik Zabel won himself another Green Jersey. Super-domestique Giuseppe Guerini was able to have a free role in the mountains and go for stage victories. Guerini finished on the podium twice in the Giro, finishing 3rd each time. But he never managed higher than 20th in the Tour de France despite finishing in the top 30 on 6 Tours de France.

The 10th stage of the 1999 Tour de France was the iconic finish on Alpe d’Huez. Halfway up the Alpe, Guerini made a solo attack leaving the likes of Richard Virenque, Alex Zülle and Lance Armstrong behind – no mean feat. Pavel Tonkov tried to give chase but ended up in no man’s land between the two groups.

Shortly after Guerini had gone through the flamme rouge, a spectator decided they wanted a picture of this moment and popped out directly into Guerini’s path, causing both to fall to the ground.

Luckily Guerini was able to quickly hop back onto his bike and claim the stage win, just 21 seconds ahead of the chasing Tonkov. The main group of favourites were just 4 seconds behind him.

The 1999 Tour de France saw the shunning of Christophe Bassons from the peloton. Bassons wrote some columns for Le Parisien throughout the Tour. This was as a result of the attention he’d received when declared a non-doper by other riders during the trials for the Festina Affair. Most of his columns were innocuous. But in one, he wrote that Lance Armstrong’s performances had shocked the peloton after his return to cycling from cancer.

On the same Stage 10 that saw Guerini get knocked off, the peloton had agreed to ride the first 100km slowly without telling Bassons. Bassons tried to get ahead of the peloton and form a break by himself. After letting him go, all of the teams then worked to bring him back quickly. The riders then passed him and stared. The only person who spoke to him was Lance Armstrong who offered the following advice:

” . . . and then Lance Armstrong reached me. He grabbed me by the shoulder, because he knew that everyone would be watching, and he knew that at that moment, he could show everyone that he was the boss. He stopped me, and he said what I was saying wasn’t true, what I was saying was bad for cycling, that I musn’t say it, that I had no right to be a professional cyclist, that I should quit cycling, that I should quit the tour, and finished by saying [*beep*] you.” – Bassons

Mostly shunned by other riders after this, the race director Jean-Marie Leblanc spoke out about him and members of his own team called him a coward. By the start of Stage 12, Bassons had gone home, unable to take the abuse the peloton was meting out to him.

The 1999 Tour de France has no winner. A result of the whitewashing of Lance Armstrong’s Tour de France history. Despite this, confirmed dopers Erik Zabel and Richard Virenque still have the Green and Polka Dot jerseys on their palmares. It linked the doping of the 1990s to the ongoing doping of the 2000s. A new generation finished on the podium in the years immediately after 1999. Riders like Andreas Klöden, Alexander Vinokourov, Joseba Beloki and the most staggering case, Raimondas Rumšas.

It took 15 years for Christophe Bassons to be vindicated, Lance Armstrong sat down with him and apologised for his actions. Bassons accepted, citing the fall-out that Armstrong experience once the USADA report confirmed his history of doping as penance enough. Tyler Hamilton later publicly apologised for his role but ultimately the real damage was done in 1999 when an innocent rider was pretty much hounded out of the sport.

The 1999 Tour de France was supposed to be the Tour of Renewal and in many ways, it was, just not how it was originally intended.