What happened to… Richard Virenque 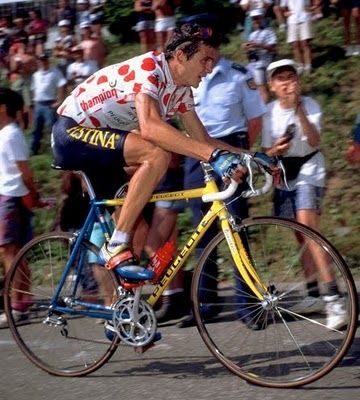 Richard Virenque led a controversial career but nothing too shocking for followers of cycling during the 1990s. He swung from denying doping, then admitting doping (sort of) and finally, suffering some of the fall-outs as a result. Amongst all that, he became celebrated as the record holder of the most Tour de France polka dot jerseys won by a rider with 7.

Seeing Richard Virenque with his victory salute of one hand raised and the index finger pointing to the sky was still something to enjoy back in the mid-1990s.

Virenque turned professional in 1991 with French team RMO after impressing with an 8th place finish in the 1990 Amateur World Championships. He took his first yellow jersey just 3 days into his first Tour de France in 1992 but lost the jersey the next day. In what was to become a feature of his career, he also finished 2nd in the polka-dot jersey competition. Initially, rumours suggested he would join the also-French Castorama team for 1993 but instead signed for Festina to whom he would be forever connected with.

Virenque also started to acquire a reputation for winning stages on the highest of mountains. He won stage 12 in 1994 to Luiz Ardiden (scene of the famous Armstrong bag crash a few years later). Stage 15 in 1995 included the Col de Portet d’Aspet and the unfortunate death of Casartelli. Also, there was stage 14 in 1997 with the summit finish in Courchevel.

1998 saw things change however with the Festina affair. Virenque’s team were disqualified from the Tour de France after a soigneur was caught with hundreds of vials of EPO and other drugs in his car. 3 of Virenque’s teammates admitted to using EPO and were given 6-month bans from racing. Virenque joined Italian Team Polti in 1999, however, the Tour de France organisers (ASO) tried to ban him from their race that year. The UCI overturned this and forced ASO to allow Virenque to enter and he won the polka dot jersey again.

The 2000 Tour de France saw Virenque finish 6th Overall but only 3rd in the polka dot jersey competition. He won stage 16 with the summit finish of Morzine though. The Festina Affair eventually came to trial at the end of 2000. Despite at first denying doping, he confessed under oath with the reasoning that the doping had happened without his knowledge. He was suspended from racing for 9 months as a result of his admission at the trial.

Richard Virenque struggled to find a team after his suspension, eventually being given a role by Domo-Farm Frites at the minimum wage of around £800 a month. Virenque returned to the Tour de France in 2002 but was beaten in the polka dot jersey competition by former rival turned training partner, Laurent Jalabert. He did win on Mont Ventoux for the first time to cushion that blow though. Virenque won a record-equalling 6th polka dot jersey in 2003, winning in Morzine again along the way and finally wearing the yellow jersey again after a 10-year gap.

The 2004 Tour de France was his final Tour. He signed off by breaking the polka dot jersey record, winning a 7th time and surpassing record-holders Lucien van Impe and Federico Bahamontes. Both had non-favourable words to say about Virenque as a result. After riding the Olympic Games road race at the end of the 2004 season, Richard Virenque retired from the sport of cycling.

2005 saw the creation of Virenque Design which designed and sold jewellery, it doesn’t appear to still exist in 2020. 2005 also saw Virenque commentate on French Eurosport for the first time. This partnership continued until 2018, when after being asked to cut his salary by 60%, Virenque left Eurosport. Richard Virenque also took part in and won the French version of I’m a Celebrity…Get Me Out of Here! in 2006.

Description of the cartoon above:
Richard Virenque says hello to the postman who tells friends at the bar who he’s just seen. They don’t believe him – ‘that’s right and I’m Raymond Poulidor’

Finally, Virenque was turned into cartoon form when he made an appearance in one of the French Les Vélomaniacs comic books. He moved to their cartoon town and inevitably was rarely seen without the polka dot jersey.

Zoe Backstedt doubles up with gold in Juniors road race