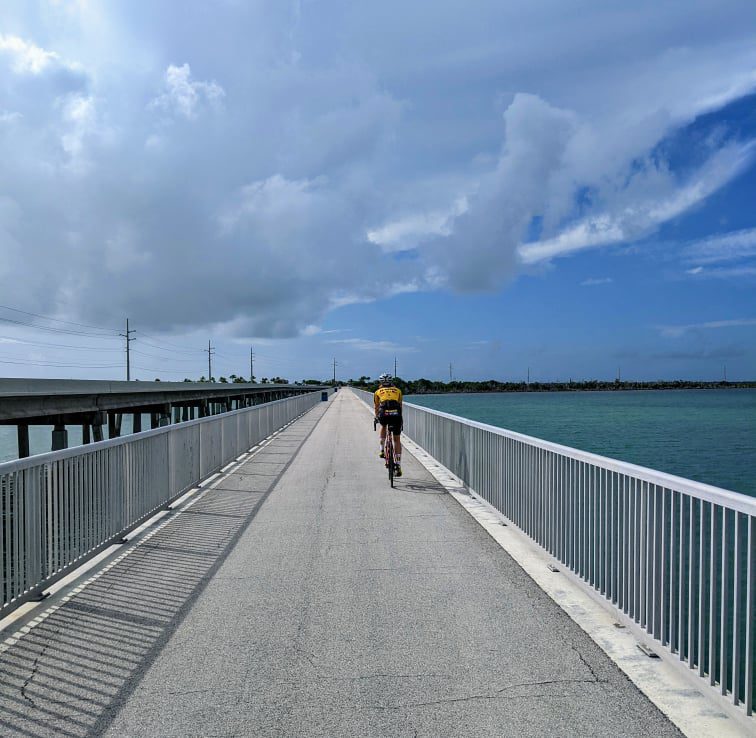 Key West probably isn’t up there in terms of being an obvious cycling holiday destination. But after a recent trip for some Winter sun, it was a huge pleasure being able to cycle in some warmth for the first time in months!

For all intents and purposes, Key West and the rest of the Florida Keys are flat. The land parts that is. Each island doesn’t take too long to complete so you’ll regularly find yourself going over a bridge. That said, I think my max gradient all day was a short blast of 6% coming out of a rest stop with a small sandy beach.

There’s not much of cycling history in Key West, the only exception really is Amanda Coker. She used a 533-mile ride from Jacksonville down to Key West as a test for her 24 hour TT record. She’s the only woman to have broken the 500-mile barrier. The record had been pushed up to 490miles by British rider Clover Murray in 2021 but subsequently beaten!

How to get there

There are a couple of ways but almost all of them involve flying to Miami first. To fly direct from the UK, you’re going to have to leave from London Heathrow and use one of British Airways, Virgin Atlantic or American Airlines. The flight lasts for around 9 and a half hours.

Once in Miami, you have a couple of options. You can either hire a car and drive down to Key West, which is roughly 100 miles away. It’ll give you a bit of a preview for your ride ahead too. There are also buses that make the trip in just over 4 hours. Greyhound and Flixbus will do the trip for roughly $20-25 per trip.

The other alternative is another flight. It’s a short up and down, lasting just 30 minutes in the air. American Airlines, Delta, United Airlines and JetBlue all fly from Miami to Key West.

The most common bike you’ll see in Key West is a sort of beach coaster type bike. Big wide handlebars with near-slick wide tyres. Somewhat scarily for experienced riders who can get up some speed, they come equipped with just a rear coaster brake. I’m used to riding fixed gear but backpedalling to desperately and ineffectively slow down is a new experience.

Now you’re not going to ride long distances on one of those, so I managed to hunt out a bike shop offering road bikes. Eaton Bikes in the centre of Key West offers BMC TeamMachine ALR01 bikes in many sizes. We were happy with ours, strangely for a rental bike they needed no extra fettling either. 24 hours rental will set you back $50, each additional day is $30 but a full week is $150. If you bring your own pedals, they’ll fit them whilst you’re there.

As a major tourist destination, there are plenty of hotels available in Key West. Most have a resort feel, with pools, bars and cocktails throughout. Something to watch out for as a result is hotels charging resort fees on top of their stated price. It’s something to be expected and is just part of the process.

Key West is literally the end of the road. You can buy all sorts of Mile 0 souvenirs marking the start of the US Route 1, which continues up to the Canadian border. You can’t so North, West or South, so East alongside US Route 1 it is. If going fast and ticking off the miles is the aim, you can ride on the main road. It’s busy but not overly so and the lanes are nice and wide too.

Because of the layout of the Florida Keys, you’re going to have to ride out and then pretty much turn around and come back the way you’ve just come. There are a few offshoots on some of the Keys but the bulk of any riding will be on the main artery cutting through all of the Keys.

If you don’t want to ride on the road, the Florida Keys Overseas Heritage Trail gives some additional options. Particularly out of Key West, the off-road paths are easy to follow and allow you to avoid the traffic completely. The trail follows the path of the old Flagler railroad that used to take passengers to Key West via train. Ultimately, the sea claimed the railway and there are huge monuments to its existence all along the way. Bahia Honda Bridge is the main one, looking like a rickety old rollercoaster, the sea has worked on it to turn the metal to the orange of rust.

The trail has a habit of crossing the main road in places. Sometimes the crossings are quick due to no traffic, other times you’ll need to be patient. Around 20-30 miles out of Key West, the trail kinda goes missing a bit. You can ride on the off-road path but a number of bridges have been shut and that forces you onto the main road. As you ride alongside, it’s clear why. Even these maintained bridges are beginning to fall into the sea, with the metalwork looking not up to standard anymore and whole chunks of tarmac missing on some bridges.

The other possible hazard on the route is the iguanas and lizards. For a Brit, these are a novel sight and something we definitely don’t get to see in the wild! I was worried about one making a stand towards us but all of them chose to run out of the way. They don’t look the same but the way they dart out across the path is akin to squirrels making a late dash.

There are a couple of eateries and restaurants along the way but nothing quite like a traditional British cafe stop. Riding in 30 degrees heat for the first time in several months, getting water was the number one hurdle to overcome. There are plenty of petrol stations with decent, big shops that are ideal for getting cold drinks. Large bottles of water from the fridge filled up the bidons with ease. There are plenty of bites to eat and one of those cultural differences, as it turns out you can buy fried chicken at petrol stations in America!

Once you’re back in Key West, there are plenty of bars to hang out at. Our one of choice was the Waterfront Brewery which makes its own beer. The bar is a huge space with one wall completely open to the elements looking out directly to the boats in the harbour. To get a quick taste of what’s on offer, they do a pair of beer flights, so you can try 4 of their beers on each one.

Americans seemed to be particularly interested in the Southernmost Point of the continental United States. In fairness it’s similar to Land’s End, it’s a bit of an anti-climax but you may as well tick it off. One street over is a great small sandy beach you can relax at and have a paddle. The bar on the beach – Seaside Cafe at the Mansion – will help you recover well too.