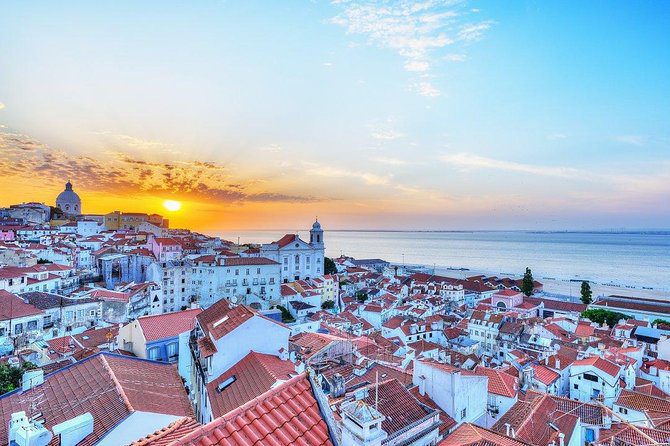 We paid a visit to Lisbon for the first time this month as a treat for Hannah’s birthday. As usual, when we’re away (like in Malta) we like to get on a bike tour to see more of the city and some of those less obvious and non-touristy things that locals get to experience.

The first thing to note about cycling in Lisbon is that it’s hilly, properly hilly – it even claims to have a Rome-esque legend of being built on 7 hills. I pointed out that Sheffield also claims to have a similar legend but this seems to be less well-known for some reason.

Our ride started by the Tagus at the Terreiro do Paco, home of a royal palace until it was destroyed in the 1755 earthquake and tsunami, an event that destroyed 85% of the city. Our bikes for cycling in Lisbon for the day were hybrid e-bikes. The electric boost was perfect to help get up the long, steep climbs away from the centre of the city.

We started in the Alfama district, the oldest district in Lisbon. Built by the Moors originally, this area of the city avoided destruction from the earthquake as it was perched on the hillside away from the river. Traditionally quite a poor area of the city, in recent times it’s been regenerated into an area with lots of arty cafes and bars.

Lisbon’s Cathedral also sits in Alfama. We reached it by cycling up some of the tight winding streets before appearing on the front doorstep. The Cathedral barely survived the earthquake with some parts of it being destroyed. The version of the cathedral standing has an almost Notre Dame feel to its design. Excavations have shown that this site has been occupied over the years by the Romans, Moors and then by the Christians after they re-took Lisbon from the Moors.

We moved on, climbing further up the hill (being thankful for the electric motor on the bike) and avoiding the tram tracks – I’ve had a battle with those before – we arrived at the Square of Sao Miguel. This square and its church are home to some of the biggest carnivals that Lisbon holds in the month of June.

The longest, narrowest climb so far took us to a viewpoint with a view of the river on a good day – on the day we were riding, all we saw was the morning fog. Continuing to ride, we found ourselves at the National Pantheon, home to the tombs of some of Portugal’s greatest. One of the last people to be allowed the privilege to end up there was the footballer Eusebio – so presumably Ronaldo can look forward to a spot there too in the future.

Our next stop after meandering through the streets was at the slightly long-windedly named Miradouro da Nossa Senhora do Monte. A Miradouro is a look-out so no surprise that the view of the city was good. We could see right across the city from this point, from the river on one side, all the way across to where our hotel was in Sao Sebastiao – around 2 miles away and unsurprisingly, up another hill, blocking the view being further.

We stopped at another viewpoint at our highest elevation for the day – we’d gained around 350ft since we’d started – was followed by some fun switchback bends on the descent. Turns out I’m a more confident descender than the usual bike tour person.

A quick stop in a park called the Campo dos Martires da Patria, the site where 11 conspirators against the British Marshall (Brits riling Continentals in history shocker…) were hanged. There’s a statue of Dr Sousa Martins who is seen as a sort of patron saint of medicine. Lots of tributes in the form of engraved stone plates had been placed at the bottom of the statue. There were also lots of chickens kept in the park which naturally caught the eye.

We then took a fun switchback descent, although much slower than I’d want to go at, it was still fun getting a bit of back tyre skid action going. Now back at the city level, we took the long, straight boulevards back to the riverside where we’d started the ride.

All in all, definitely a fun ride, but an e-bike is definitely worth springing for to make your life easier cycling in Lisbon!