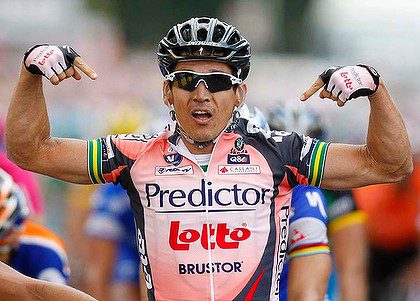 I’ve been following cycling since I was plonked in front of the Channel 4 programme back in 1997, the year that Jan Ulrich won his Tour. The following year I followed the whole thing and saw Marco Pantani zoom off and win.

Robbie McEwen was pretty much my favourite sprinter in that early to mid-2000s period. He never had the same sort of lead out to the finish that Mario Cippolini was given but just seemed to scrap his way to the front, ultimately winning 3 Green Jerseys in the Tour de France.

This was a golden age of sprinters where no one single sprinter dominated the field and all were capable of getting stage wins on their day, the likes of McEwen, Cippolini, Zabel, Hushovd, Cooke, Boonen, Freire and Hunter fought it out to wear Green (and often Yellow in the first week back then).

McEwen stood out as successful and also very very quick – Erik Zabel won 6 Green Jerseys but wasn’t rapid, although admittedly not slow, definitely very consistent and capable of getting points in the mountains (basically the EPO version of Peter Sagan). The winning on the line with arms aloft is what captured my imagination. McEwen won 12 Tour de France stages all in all (joint 16th on the all-time list), one less than Cipollini, equal to Zabel, two more than Hushovd (TTT wins ignored) then there’s daylight.

The 2007 Tour de France started in London and the 1st stage to Canterbury produced one of Robbie McEwen’s most epic wins and also what turned out to be his last Tour de France stage win. McEwen crashed with 20km left in the stage, which with the peloton riding desperately quickly left a huge task for him to catch up and rejoin. It would surely use up all of his energy just to finish the race in the bunch let alone contest the stage. In the final few metres of the race with everyone setting up for the sprint finish, McEwen just appeared off the side of the main line of riders and seemed to just zip past all of them with ease by hitting speeds the others were obviously not capable of matching. McEwen went from down and out to win by over a bike length on his own without a lead-out train.

The knee injury he sustained in the crash led to him withdrawing from the tour a week later but he left having shown us another moment of greatness.