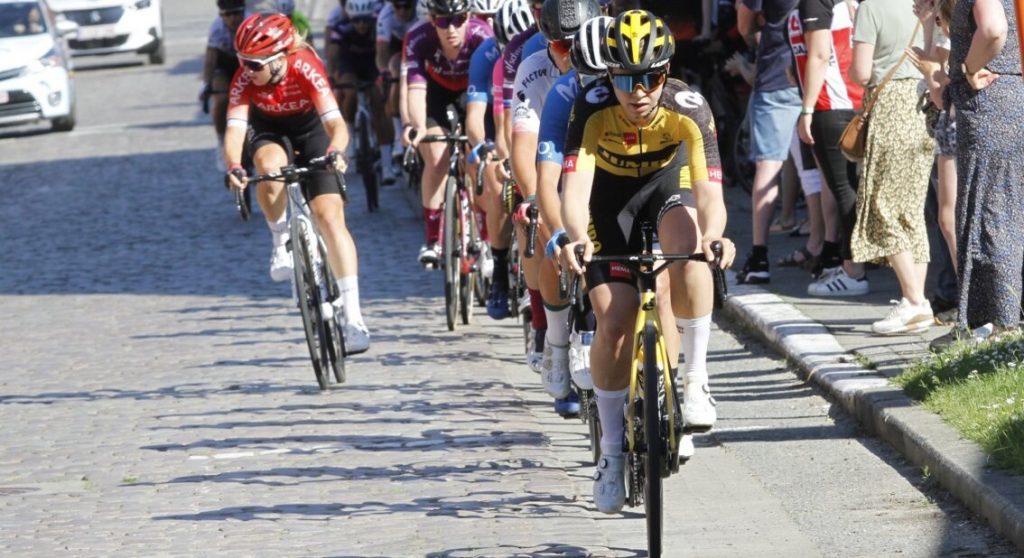 Dwars Door de Westhoek takes place in the corner of Belgium, next to the French border, called Heuvelland. It’s the area most commonly associated with the Gent Wevelgem races. Starting and finishing in Boezinge, the riders are treated to 3 ascents of the Rodeberg before heading back into town. The Rodeberg is just under 1km long at an average of 5.2%, but that masks a peak gradient of around 19% to really test the legs of the riders. They’re spared the additional climb up to the summit of the Baneberg from the top of the Rodeberg. The riders will be thankful that they pass through the village of Kemmelberg without having to take on the mighty Kemmelberg.

Once the climbing laps are done and dusted, there’s a flat return to Boezinge. 3 different laps round a local route shouldn’t present any challenges and it’s no surprise that almost every edition of Dwars Door de Westhoek has finished in a sprint. There’s an interesting note in the roadbook about the train crossing, they first encounter it after 6km of racing and if they’re slow starting they are very likely to have to stop. On the way back in, things should be ok provided the peloton hasn’t gone significantly faster or slower than the expected schedules.

Elisa Balsamo is the rider with the best recent history at Dwars Door de Westhoek. She won the 2019 edition and finished on the last step of the podium in 2018. She’s been consistent in 2021 although her only victory was at GP Oetingen. She picked up 4 top-5 finishes in the Belgian sprint classics so should be a lead contender here. Her main rival in the sprint will be Lorena Wiebes. She’s joined Balsamo on the podium here twice, finishing 2nd in 2018 and 2019. After a quiet start to 2021, Wiebes has found her 2019 form. She’s taken wins at Scheldeprijs, Elsy Jacobs, GP Eco-Struct and Thuringen Ladies Tour. She’s my main favourite.

SD Worx are well set up for this race as usual. Jolien d’Hoore has a great history here, although it was a while ago now. She won Dwars Door de Westhoek in 2013 and finished 2nd in 2014 & 2015. Only one edition has she finished out side of the top 10. Christine Majerus is another former winner, back in 2016. She’s had a consistent May, finishing 8th in both the Festival Elsy Jacobs and the Thuringen Ladies Tour. Lonneke Uneken was 5th here back in 2019 when she was a Hitec rider, she might get an opportunity again this year. Elena Cecchini is another with a strong past at this race, finishing 2nd and 5th. On the strong SD Worx team though, she not had much chance for success. Amy Pieters has good shout though, she’s just finished 6th at the Thuringen Ladies Tour but has never raced this before.

Arianna Fidanza got the nod for BikeExchange at the Setmana Ciclista Valenciana and finished 2nd and 3rd. She’s been spending a fair amount of 2021 as a lead-out rider but should get the nod again here for the team. Jess Roberts has a good result here in the past, 6th in 2018’s race but has had a tough 2021 so far, a best of 84th place and 3 DNFs. Hopefully, she can kick-start her season here.

Jelena Eric feels like Movistar’s best bet for a result in Dwars Door de Westhoek. She’s come close to win in 2021, finishing 2nd in the Ronde de Mouscron when Valcar’s Consonni won. She has other top-10 results at GP Oetingen and a Vuelta a Burgos stage when she’s had opportunities. She might sneak onto the podium behind the sprinter specialists. Her experienced teammate Barbara Guarischi will probably lead her out but she has her own good result in 2021, 2nd at Vuelta CV Feminas. It’s her only top-10 of the 2021 season so far though.

Parkhotel Valkenburg will have to choose between Amber van der Hulst and Kristie Van Haaften. Van der Hulst continues to sprint well this season, finishing 3rd in the GP Eco-Struct recently. Her 9th in GC at the Healthy Ageing Tour back in March was particularly impressive too. Kristie van Haaften has a decent past result here, finishing 8th in 2019. She’s had a bit of a tougher time across 2020 and 2021 but returned to form with 10th at the GP Eco-Struct, performing as a strong lead-out.

Gladys Verhulst won the GP Féminin de Chambéry back in April for Team Arkea. Since then, she’s scored two further top-10s in the Thuringen Ladies Tour. With this sort of parcours, she should be looking to reach the top-10 once more. After a strong Spring, Doltcini’s Kathrin Schweinberger might not be at her best. She struggled a bit in the Setmana Ciclista Valenciana (a tough race anyway), ultimately not starting the final stage. On a flattish race like this, she should be knocking on the door of the top-20.

Jumbo Visma has a few options. Anna Henderson was impressive during the Thuringen Ladies Tour. She scored 4 top-10s and took the race to the other GC potentials. She’s begun to rack up the results at races outside of the WorldTour. Jip van den Bos continues to find her feet again after a long layoff due to a concussion sustained in last year’s GP de Plouay. At her best, this would be her sort of race but there are question marks still. Karlijn Swinkels also got into some attacking action during the Thuringen Ladies Tour, although ultimately didn’t get the result to show for it. If she’s allowed to go for it here, she can recreate the form that saw her finish 4th in GC at Festival Elsy Jacobs in May.

Thalita de Jong had a welcome return to form in the 2021 Spring season. She was on the podium at Omloop van de Westhoek and finished 5th in GC at Festival Elsy Jacobs. The outright sprinters like Wiebes will probably outpower her but she can still finish in the top 10. She has strong results here in the past of 4th and 7th but they came way back in 2014 and 2016. Her sister, Demi de Jong also has a strong past here with a pair of top-10s from 2016 and 2018. Unfortunately, her 2021 season results aren’t great with a best of 94th.

Jesse Vandenbulcke feels like the go-to for Lotto Soudal Ladies. She had some unlucky moments in the Spring with poorly timed punctures but peaked with 5th at Omloop van de Westhoek. If the team can get her into a good position, she can be in the top-10 again. Yara Kastelijn feels the best option for the Plantur-Pura team. She took their best result of the Spring season with 15th at Brabantse Pijl as most of the riders slowly found their road legs after a Winter spent racing cyclocross. A top-15 would be a great result.

Kim de Baat deserves a mention as a former winner of the Dwars Door de Westhoek, even if t was back in 2012. This will be her first race of the 2021 season. Liv’s Valerie Demey will be her teammate on a Belgian national team and probably has the better shout. She was consistent in Thuringen, finishing 10th in GC. She also came 7th in Omloop van de Westhoek earlier this season. Repeating that would be a solid result.

Silvia Zanardi shone at Scheldeprijs back in April, finishing 13th place. Since then though, she’s not really done a race that suits her and the results reflect that. The hilly Spanish races saw her get the best result of 58th at Durango Durango but aren’t reflective of what she can do in a sprint. Anna Kay will be riding for Team Rupelcleaning in her first road races of the 2021 season. She had an impressive cyclocross season, scoring regular top 10s. It will be interesting to see if her kick from the off-road season transfers to the road.

Lone Meertens is a longer shot for Lotto Soudal Ladies but might be seen in the break. She was 18th in 2019’s edition of this race though so may find herself near the front at the end as well. She’s had to work hard in 2021 and her best result is 22nd in Brabantse Pijl. I’m expecting her to break into the top-20 soon. Celine van Houtum was 13th in 2019’s race and is in good form this year as well. She finished 9th in the GP Eco-Struct at the start of May and was 18th at Scheldeprijs too. She’s the best bet for Multum Accountants here.