We’re now firmly in classics season after Milan – San Remo last weekend. Dwars door Vlaanderen is the start of ‘Flanders week’ which sees 4 top quality races in a short space of time. Something to look forward to! This race is a combination of cobbles and steep climbs, a early tester for the Tour of Flanders but also those looking to impress in Paris – Roubaix. Traditionally Belgians win this race however after a modern re-scheduling more and more other riders have been winning too. 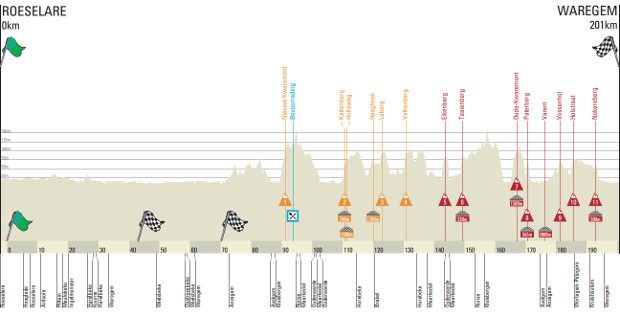 Niki Terpstra has won this race twice in the last three years and lines up on Wednesday too. Naturally he is the favourite.

2013 winner Oscar Gatto lines up for Androni and after strong performances at Strade Bianche and Milan-San Remo, is definitely in the mix. 2010 winner Matti Breschel also lines up as leader of Tinkoff-Saxo. Breschel did well in Milan – San Remo, finishing 12th which is surely an indicator of good form.

Other riders in with a chance are Cofidis’ Nacer Bouhanni, who has been on the verge of a big win this year but seems to lack the lead out train. Trek’s Giacomo Nizzolo, MTN’s Tylar Farrar (or Boasson Hagen who looked good last weekend), Lotto’s Jens Debusschere are all good shouts for a top ten finish or higher with the right amount of luck. Astana’s Lars Boom should do well too although may get left behind if caught out by the attacks on a steep section.

This smaller sort of race can allow genuine outsiders a chance to shine. Edward Theuns of Topsport can do well, as can Raymond Kreder of Team Rompoot Oranje. Both are locally based and have the ability to make the selection near the finish.