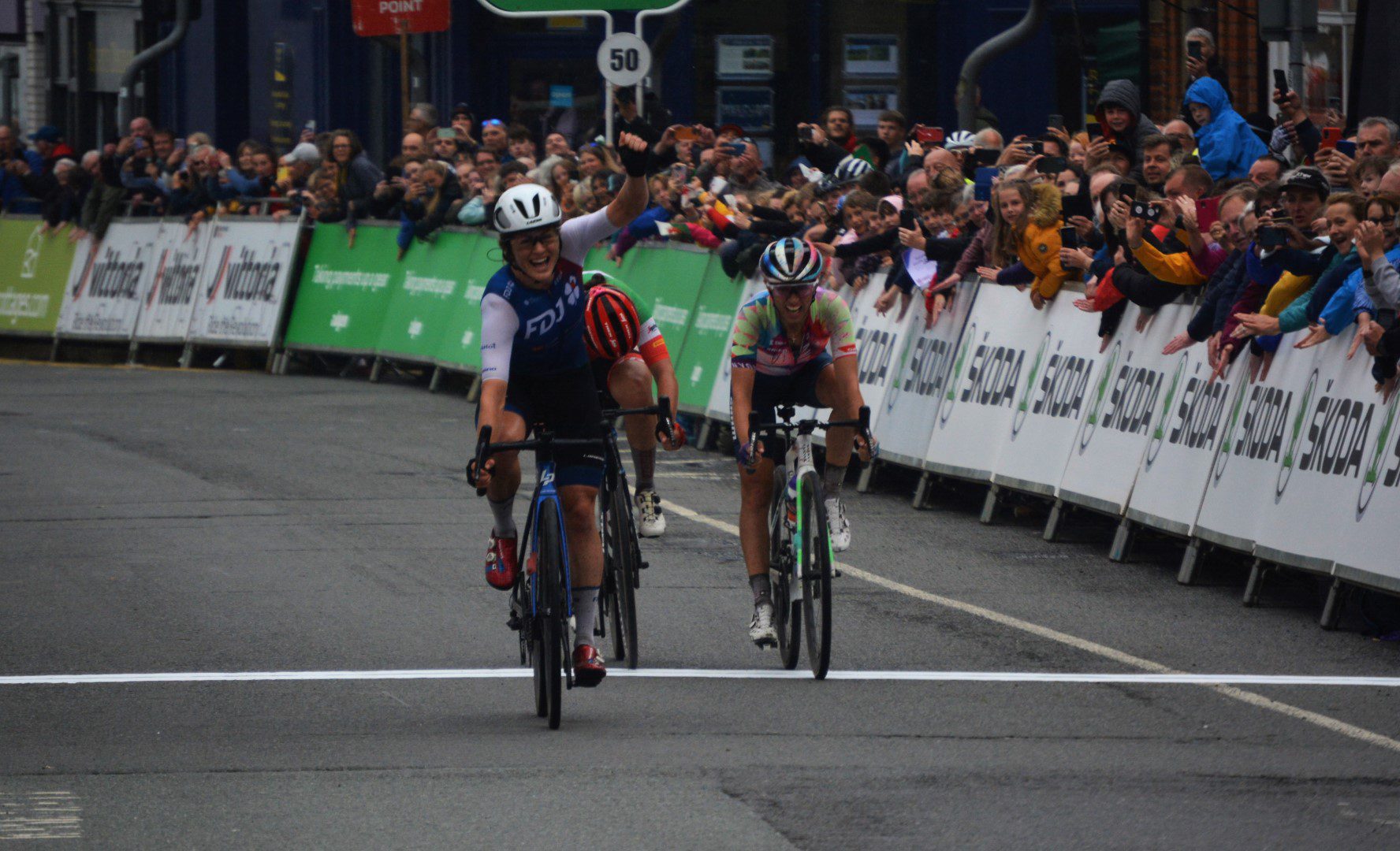 After a wet day in wales, FDJ Nouvelle-Aquitaine Futuroscope’s Grace Brown took the win and the overall race lead in Welshpool. Brown beat Kasia Niewiadoma and Elisa Longo Borghini to claim the stage. She’d initiated the move with the original breakaway beginning to splinter over the climbs late in the stage. 5km from the end of the stage, Brown attacked and only the Pole and Italian could match her speed. The trio worked together, holding a chasing quartet at 10 seconds, with Longo Borghini leading out the sprint on Broad Street

Thanks to the bonus seconds at the end of the stage, Brown now leads the overall competition by 4 seconds over Kasia Niewiadoma with Longo Borghini 6 seconds behind. Tomorrow’s stage is expected to decide the GC with a summit finish on Black Mountain in Wales. We saw Brown climb well back at Setmana Ciclista Valenciana back in February and another performance like that could see her win the overall at the Women’s Tour this year.

“I had planned before today that I wanted to be aggressive in the final, it’s cool when you play out your plan and it comes off so I was excited, and also I guess a bit of relief because this is my first win of the year and I’ve been wanting it for a little while.

We were working consistently most of the time. I guess there were some points where we took the gas off a little bit, but any time that we heard that the gap come down, we notched it up a little. I think when the roads were more climby we got a bit more time, obviously around the lake, where it was flat, the time started coming down quite a bit.

I wasn’t too concerned [on being joined by Niewiadoma and Longo Borghini], it was actually quite good because you’re more likely to stay away if you’ve got three. Out of everyone there, I think I can beat those two in a sprint, so I was quite happy about it actually. It was nice to have them in the final.

Obviously, I want to be up there on the final climb [tomorrow], I think that’s what it’s going to come down to. I’m happy now that I’ve got a little bit of buffer and time, then if I finish with the top climbers then I can hopefully retain the jersey.”

Originally, Brown was in a group of 10 riders that went clear on the Hirnant Bank climb approaching the lap of Lake Vrynwy. Team DSM saw the danger if they wanted Lorena Wiebes to win the stage, so sent Pfeiffer Georgi to work on the front. She put in a massive stint that shed riders from the peloton, unable to keep up with the relentless pace but never quite managed to close the gap to the break.

“It was a really lumpy stage, there were some really hard QoMs in the middle of the stage and then some more, let’s say flat parts in the end, but still uncategorised hilly parts. It was really really hard. I like the stage here and I’m looking forward to tomorrow.

With the team, we chased back the breakaway. It was away and then the team director told me to go on the first QoM, and there we set up a breakaway that stayed away until the end. It was always really close to the bunch but we managed to stay away.

I’m excited about tomorrow. It’s going to be nice to finish up on the Black Mountain.”

Away from the GC battle, the Queen of the Mountains jersey changed hands with Elise Chabbey taking over the lead from Christine Majerus. The gap is now 14 points between the Swiss and the Luxembourger with Black Mountain a key decider in that competition tomorrow. Chabbey will be looking to repeat her 2021 victory in the QoM jersey.

The points jersey didn’t change too much today. Van der Duin did extend her lead after picking up a point in Chirk and is guaranteed to be wearing the jersey on the final stage to Oxford thanks to her lead.

Le Col – Wahoo rider Maike van der Duin extended her lead in the Pillar Sprints classification thanks to taking a point at the opening contest at Chirk, and with a lead of seven points will hold the jersey going into the final stage regardless of points garnered in stage five.