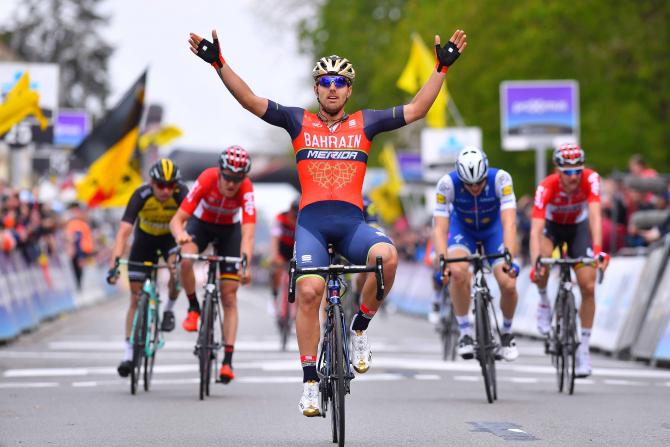 Brabantse Pijl had its first edition in 1961, the race started and finished in Brussels. The first winner was Pino Cerami, who now has a race named after him – the GP Cerami. Pijl is the Flemish word for arrow, making it the Brabant version of Flèche Wallonne.

The end of the 2000s saw a lot of changes for the race. The start was moved in 2008 from its traditional site of Zavantem to the bigger Leuven. The finish also moved from Alsemberg to Overijse in 2009.

Brabantse Pijl used to take place the weekend before the Tour of Flanders
but from 2010 it has taken place mid-week after Amstel Gold. It links
the largely Flemish cobbled classics to the hilly Ardennes classics.

Recent years has seen the race won by a combination of punchy sprinters, breakaway specialists and Ardennes specialists. The mixed rider types
means the win is open to any rider having a strong day and the little bit
of luck needed to stay away to win.

The race started in the run but soon after rain and hail hit the riders. A series of big names all managed to crash, including Andy Schleck, Peter Sagan, Jerôme Pineau and Gerald Ciolek.

With 35km to go, Thomas Voeckler attacked from the peloton on Hagaard. He flew over the next climb too to establish the gap. Voeckler caught and passed the early breakaway to now lead the race by 23 seconds. He increased it to 1:10 going into the final circuit lap.

The gap stayed the same until the finish where the chasers began attacking each other. Fabio Duarte went first but Oscar Freire and Pieter Serry out-sprinted him to take the podium spots. Voeckler took his maiden win.

The Schavei is climbed a few times in the race but none is as important as the last ascent. The fninish line is 200m after the summit. Schavei is
0.6km long at an average of 5.9%.

Not the steepest climb in the world, it can still shell riders out of the pack who don’t have the legs left. Only the strongest are then able to contest the following sprint for the victory.