What happened to… Michael Boogerd 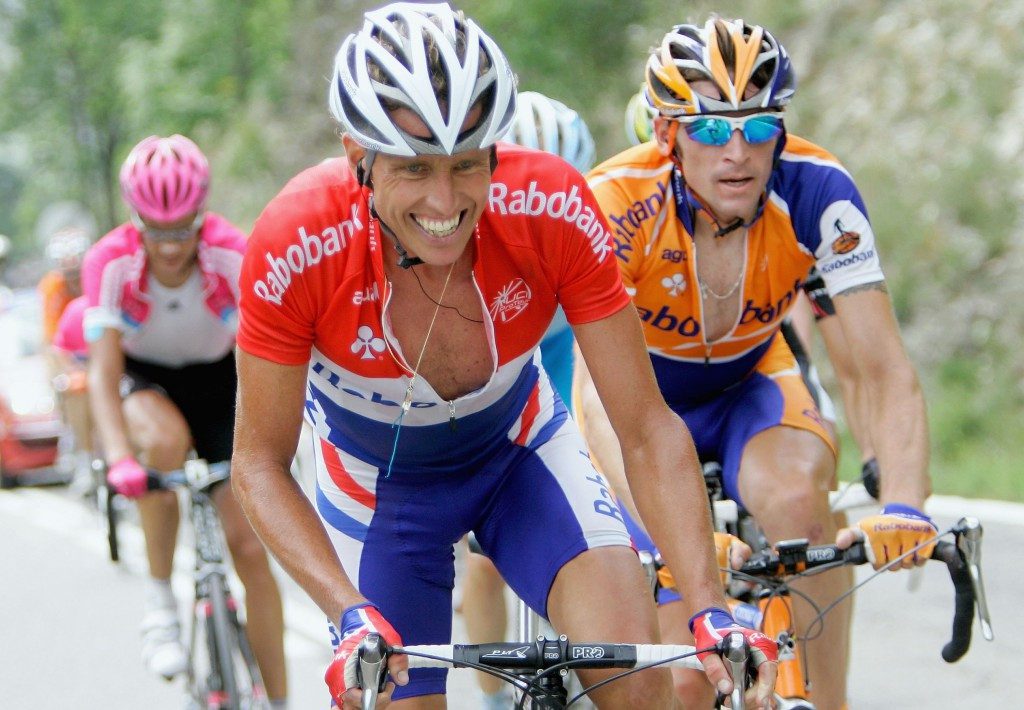 For me, Michael Boogerd is connected to the 1998 Tour de France which was one of the first that I watched every single day. Resplendent in the orange kit of Rabobank, he finished 5th whilst Marco Pantani won and the Festina affair took headlines. For Dutch fans though, he’s forever linked to the Amstel Gold Race. A source of national pride at times and ultimately Boogerd had a chequered career that covered the peak EPO era.

Michael Boogerd was a one-team man. Starting out in 1994 at the Wordperfect team, he stayed as it renamed itself to Novell and then Rabobank. His first Grand Tour was the 1995 Vuelta a Espana where he finished a respectable 42nd. The following year he entered his first Tour de France, won Stage 6 in the rain and finished 31st. That stage win as the only stage he finished in the top-10 the entire race. He progressed up the rankings to 16th Overall in 1997, finishing an hour behind the winner Jan Ulrich.

Boogerd went into the 1998 Tour de France as an outsider with a long shot at victory. As the race entered the Pyrenees, he won the bunch sprint of the favourites behind Pantani to break into the top-10. The next day he was again in the main pack of favourites and put a few seconds into Jan Ulrich as the dominant Pantani won. In the Alps, whilst Pantani rode away, Boogerd continued to finish consistently highly. Whilst never quite in the race for victory, Boogerd was significantly better than those finishing below him.

1999 saw Boogerd finish a disappointing 56th. A victim of the infamous Passage du Gois on Stage 2, he was almost immediately ruled out of contention and lost 5 minutes. After a DNF in 2000, Michael Boogerd returned to form in 2001 by finishing 10th. He limited losses in the Pyrenees but jumped into the top-10 by managing to join a breakaway that gained 15 minutes on the peloton. The final time-trial stage saw Boogerd drop from 8th to 10th.

He rode the Giro for the only time in 2002. A finish of 17th before finishing highly in the Tour de France again in 12th position. After this point, Boogerd became an elite domestique for Rabobank’s main Grand Tour leaders. He rode for Levi Leipheimer in 2003 and 2004. Michael Rasmussen and Denis Menchov became the key leaders after that. Boogerd managed to finish ahead of them sometimes with a run of 24th, 12th and 12th between 2005-2007. These would be his last 3 Tours de France.

Boogerd was also a good Ardennes Classic rider, particularly at his home race of Amstel Gold. He won the race in 1999 beating Lance Armstrong in a sprint. And also finished on the podium 4 other times too. Boogerd also won Brabantse Pijl twice, in 2001 and 2003. He twice finished in 2nd place in both Liege Bastogne Liege & Il Lombardia.

Paris-Nice was the other big win in his career. The 1999 edition saw Boogerd escape and gain time on Stage 5 to take the leader’s jersey. He then cemented it on Stage 7 by finishing in a group of 10 riders that finished 90 seconds ahead of the chasing peloton. He also finished as Dutch National Champion 3 times – 1997, 1998 & 2006.

Then there’s the other, uglier side of things. After escaping scrutiny during his career, this changed in 2008. Bernhard Kohl’s manager said he supplied Boogerd (and others) with drugs. Boogerd denied all until 2013 when he admitted his drug use. Close to 1 million viewers watched the admission on TV. He confirmed that he’d used EPO, blood transfusions and cortisone between 1997 and 2007. In 2016, Boogerd had his 2005-2007 results voided. This affected none of his major wins, only one of his National Championship wins and some podiums in big races.

Soon after retirement, Michael Boogerd was given the Order of Orange-Nassau in recognition of his career. He then worked as an ambassador for his former team’s sponsor Rabobank until late 2008. He hosted Wielerland TV from 2009 and frequently commentated on cycling races on Dutch and Belgian TV. 2011 saw Boogerd win the Dutch version of Dancing on Ice, he’s been in a relationship with his skating partner ever since.

Eurosport signed him as a colour commentator in 2013. He combined this with being an analyst for the Tour du Jour programme on Dutch TV.

In 2015, Michael Boogerd had a hand in the creation of the Dutch Pro-Continental Team Roompot. A Dutch team intended to fill the gap between WorldTour and Continental levels. The team was successful in bringing through young Dutch talents, the biggest of which was Dylan Groenewegen. His admission to doping resulted in a suspension from this work between 2016-2017.

In 2018 he returned to reality TV, taking part in Boxing Stars, where he made the final. 2019 saw Boogerd combine his TV work with a role at Roompot again in their final season.