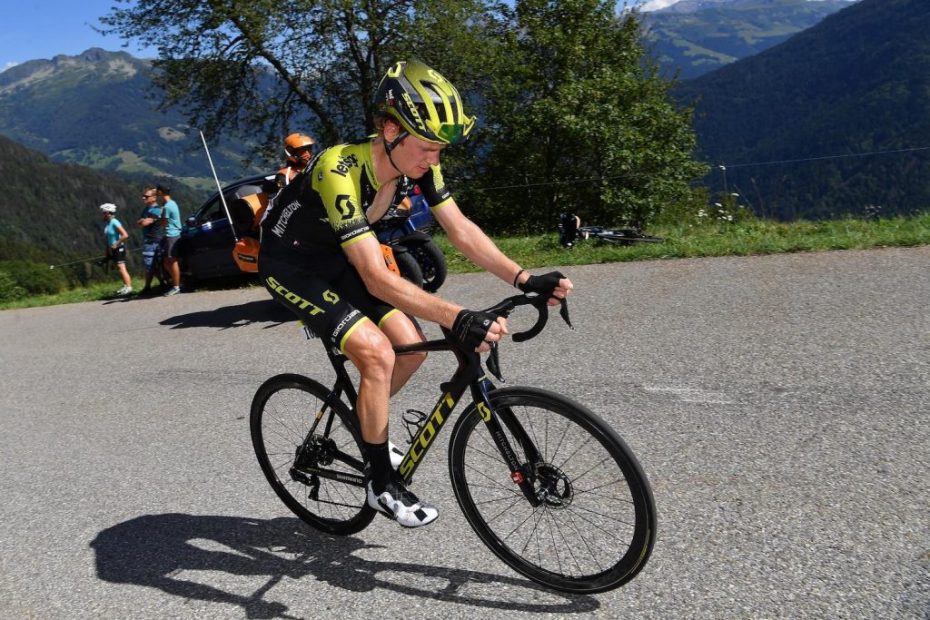 Ruta del Sol stage winner Jack Haig climbed to fourth place on stage four of the Criterium du Dauphine after a long day out in the breakaway.

The Australian made it into the decisive break on another mountainous stage, but was unable to go with a late attack on the final climb, eventually sprinting to fourth on the runway in Megève.

Big Fight
A breakaway battle ensued as soon as the flag dropped on stage four, with numerous attempts to form an escape group coming and going inside the opening 20km. Haig was amongst those riders trying to break clear and the Mitchelton-SCOTT man eventually found himself in a strong nine-rider move.

That group then grew to 15-riders over the top of the first categorised climb of the day, with the gap back to the peloton sitting at just over two-minutes over the summit. The escapees then went onto extend their advantage over the bunch to just shy of four-minutes by the halfway point of the stage.

A crash for race leader Primoz Roglic (Team Jumbo-Visma) saw the gap briefly pass above five minutes, but it quickly began to fall as he re-joined the peloton. With the bunch closing in, the breakaway then began to attack each other on the Montée de Bisanne.

Fight for Victory
Haig was alert to the moves and the 26-year-old went clear in a select group of seven riders with 50km to go, before action at the head of the peloton saw the gap start to tumble further, resulting in a reaction in the breakaway.

Fresh attacks left six riders at the front of the race, with Haig unable to go with the increase in tempo. However, the Volta a la Comunitat Valenciana runner-up managed to claw his way back on before the summit, and the group grew to eight as they began the descent.

The yellow jersey group then seemed content to allow the break to race for the stage victory as they slowed their chase. Kenny Elissonde (Trek-Segafredo) was the first to attack out of the breakaway on the final climb, before Lennard Kamna (Bora – hangrohe) countered and went solo. Haig gave chase with Julian Alaphlippe (Deceuninck – Quick Step), but the duo couldn’t close the gap, with the Australian crossing the line in fourth.

Jack Haig:
“It was either today or tomorrow [I planned to get in the break]. Today looked like it was going to be the best one to arrive to the finish, and it did, but I didn’t quite have the legs at the end there.

“I think the front two committed quite hard together and I didn’t have the legs to work super hard with Alaphilippe there in the final and it was quite fast, so the time distance to close the gap was quite hard.

“Every day I feel a little bit better, everyday another race and it feels like we’re slowly getting back to normal.”