The Dutch TT specialist talks about what makes the ‘race of truth’ so special, and recounts her last big TT win in the 2019 European Championships.

Ellen van Dijk is one of the most prominent cyclists of her generation. She boasts 52 wins as a professional, 29 of those in individual time trials. Among her impressive palmarès, in 2013, she became the time trial World champion in Firenze, thereby establishing herself as an elite specialist in the ‘race of truth’.  It is, therefore, not a surprise that her last individual victory came in her favorite discipline. What is not so evident is the physical adversity and mental turmoil she had to overcome in securing that win, her fourth consecutive gold medal at the European Championships.

The 33-year-old Dutch Trek-Segafredo rider endured an injury-rife season in 2019, but her fighting spirit and never-say-die attitude enabled her to power to yet another title and cement her status as a force to be reckoned with against the clock.

Below Ellen recounts her first steps in time trialing and looks back at the 2019 European Championships. 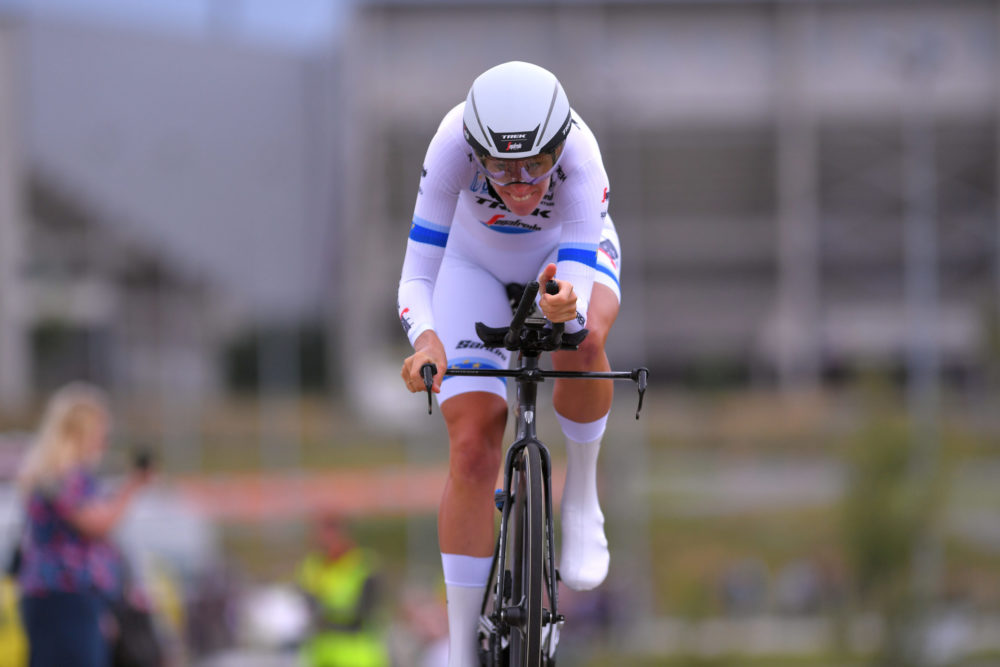 The anatomy of a TT – by Ellen van Dijk

Time trials are tough. There is no sugarcoating it. Of course, there are a lot of technical considerations and specific work, but I think one of the most challenging things to master to be a good time trialist is the fight with yourself, with the voices in your head and the pain in your legs. I think that is, by far, the most challenging part, the mental side of it: To be able to ignore the pain in your legs, to keep going, and continue to suffer.

In an individual time trial, you can never blame someone else – it’s only about you, and that’s not always easy. But it’s such a pure discipline. It’s just you and the bike, going as fast as you can. There are no excuses. That’s what I really, really like about it.

I took my first steps into developing my skills as a time trialist when I became the Junior National ITT champion, but I think the first time I had a really good time trial was in the 2012 World Championships in Valkenburg. I was fifth, and I started to believe that I could do well in this discipline. Before that, I had already done maybe four World Championships or so, and I was always around 20th place. I didn’t think I would ever be good, but then, I started to work more on details, like nutrition and different training methodology, and I noticed a big progression. That gave me the trust and the belief that I could be good at TTs. I started to specialize more and be more into aerodynamics and materials. One year later, in 2013, I became the World Champion. That was my big breakthrough.

Sometimes I would just stop in the middle of a ride because I simply couldn’t do it; I couldn’t hold my position because the pain in my back was unbearable.

Fast forward to August 2019, two weeks before the European Championships. I had a title to defend, but I was unable to ride my TT bike. I had a nagging back injury, and I had been struggling since the Thüringen Ladies Tour in May, a stage race that included an individual time trial. That day I did the warm-up, and all of a sudden, I couldn’t bend over anymore. I couldn’t sit in my aero position just before the start! In the end, I somehow managed to get into an aero position, and I never got out of it, not even standing after the corners. I won that ITT, but I also started a painful battle with a back injury that stayed with me until the European Championships.

One week before the event, I honestly thought I wouldn’t be able to ride because I was unable to push power on my TT bike. I thought about canceling but decided not to make an emotional and rushed decision. I could always cancel on the day. I tried to rest as much as possible and actually managed to ride my TT bike a few times in the days leading up to the Championships. Sometimes I would just stop in the middle of a ride because I simply couldn’t do it; I couldn’t hold my position because the pain in my back was unbearable.

I was very, very uncertain that day before the start, but I said to myself: “Just start. If it’s not happening, just stop after a couple of kilometers. That’s it. You have nothing to lose.”

Of course, I had a title to lose. I had been the European time trial champion for three years in a row, and If I didn’t start, I would for sure lose it. So I pushed my self-doubt aside and just prayed that I would be on a good day, and my back and legs would hold. 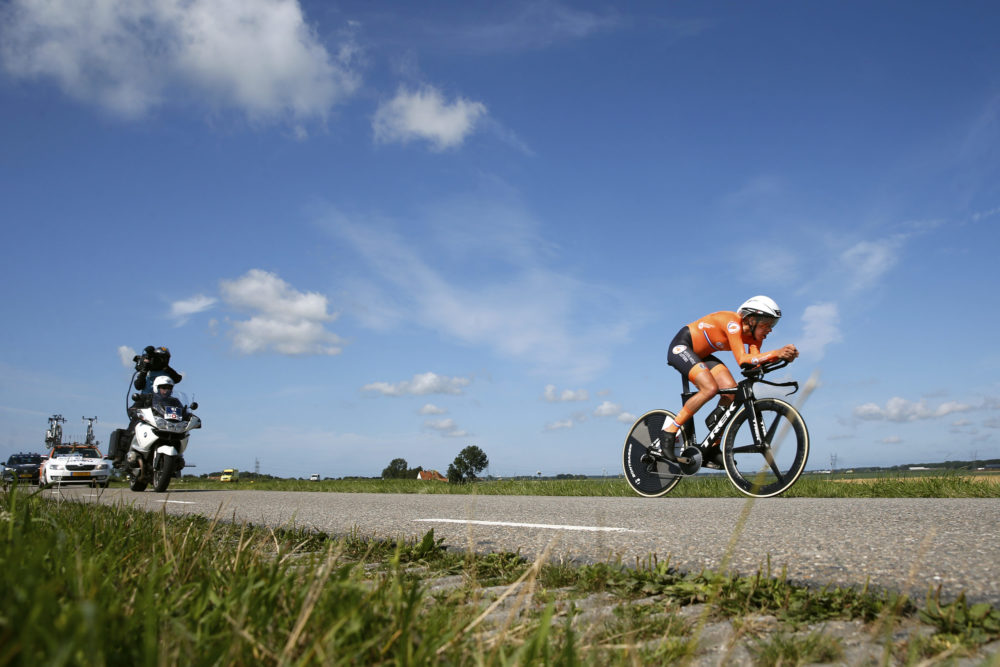 ITTs are always a stressful event in the sense that you know you’re going to suffer, and there is no room for mistakes. But that day, I also didn’t know if I would even make it through.

That was the number of the day. I had done the recon of the course in Alkmaar a few times. It was a flat, power course, not too technical, with just five or so corners. It was only about hammering, and that suited me. I compromised a bit on the aerodynamics because I went a little higher with my handlebar. That’s less optimal for aerodynamics but more optimal for getting the power and definitely more comfortable.

That day I just went through my pre-time trial routine. I have a routine where I write down everything I have to do from the moment I wake up until the start of the time trial: stretching, breakfast, sometimes meditation, visualization techniques, length of the warm-up, when to eat, what to eat. Everything is planned. Time trialing is all about details like that. It starts in the off-season with aerodynamic testing on the track, testing wheels, crafting the speed suit, tweaking the position – so many details outside of the actual training goes into figuring out how you can go faster. But on the day, it’s all about getting yourself into that mindset.

I did all I could to be race-ready that day, but there is no denying I was incredibly nervous. ITTs are always a stressful event in the sense that you know you’re going to suffer, and there is no room for mistakes. But that day, I also didn’t know if I would even make it through. I somehow managed to switch off all that anxiety and just started. 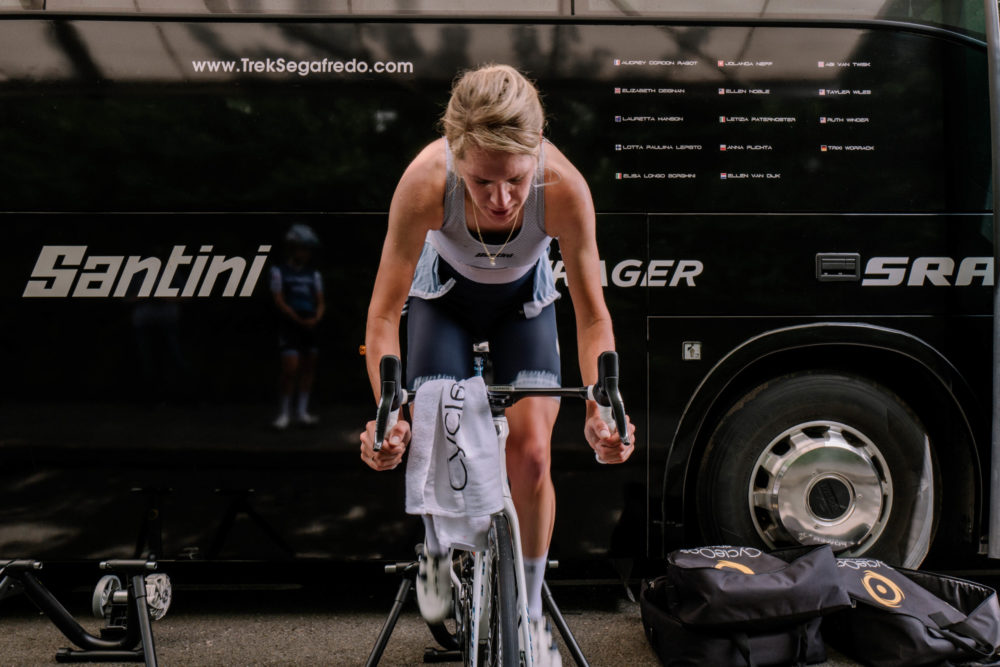 I’m a type of rider that never wants to hear any intermediate times. It doesn’t matter how fast somebody else is going because I’m going the maximum, so I don’t want to hear that information because it can only distract me from what I’m doing at that moment. It’s my fight with myself. I give everything that I have in a time trial.  It can be demotivating if I know that somebody is faster or, if I’m the fastest, it can be distracting. I just go full gas to the finish anyway.

So I decided for me, it’s better not to know the times in much the same manner that I never race looking at the power meter. I always use it in training but not in races. Mentally it’s better: If I see numbers that I don’t want to see, then it’s hard to keep positive or to stay in the moment. So, I do everything by feeling. It’s the same in time trials. I was the last off the ramp, and I just went full out from start to finish.

Once I crossed the finish line, I knew immediately I had won because I saw people putting their hands in the air. My boyfriend was there, just after the finish, and he had gone through the whole preparation with me and knew about all the struggles. We just fell into each other’s arms; it was a very special moment.

My other European Championship titles were also special in different ways. For example, the first one in 2016 was memorable. It came right after the Olympics, where I ruined my Olympic TT because I rode into a ditch and ended up fourth, losing out on a medal. But the European ITT title in Alkmaar will for sure always be a special memory because of all the hardship I had to overcome to win it.