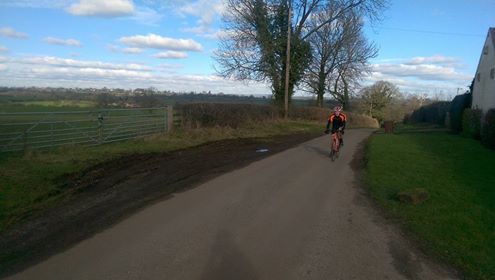 This Valentine’s Day, having no other plans to worry about, I headed out to lovely Burton on Trent with Rich (his first event) to do CC Giro’s reliability ride event. 3 events in 3 weeks is a good start to the Liège – Bastogne – Liège preparation – only 2 months left to go! CC Giro are a club from the gap north-east of Birmingham around Lichfield, Tamworth and Burton on Trent, well known for their Pink jerseys (inspired by the Giro d’Italia) and for being the home club of pro rider Dan Martin (of Liège – Bastogne – Liège winning and also crashing on the final corner fame).

Having caught the train up to Burton, we had just enough time to reach the starting point (Rosliston Forestry Centre), stand around for a couple of minutes, take a selfie, watch a man repair a puncture (puncturing before even starting is unlucky) and play guess the price on a Cervelo S2 with Zipp carbon wheels that was resting against the wall (correct answer is somewhere in the region of £3000+). Unfortunately we didn’t have time for a pre-ride coffee but Pret at New Street on the way up had sorted us for that anyhow. It would be nice to be able to ride a corner of the country I’d managed to never ride in up until this event.

Repeating the same mistake as the Stratford ride, we tried to set off, only to see a group waiting to be released so looped round onto the back on that. Rich started receiving comments on his bravery for being the only person out wearing shorts, he was also the only person not with clippy shoes or a club rider. We sat comfortably on the back of this group for 15 miles, when we came to a hill where it all got very messy. As slower people at the front fell backwards, people had to work themselves around them, as a female rider suddenly swept across in front of me I decided I wanted out of this and shot off up the hill overtaking about 20 riders and getting some clear air. Once we were at the top I sat up to wait for Rich who surprisingly wasn’t too far behind – the big group had split into two smaller ones as a result of the hill and a roundabout shortly afterwards the guys on the front pretty much stopped to let people catch up. Rich and I pressed on.

The theory was that we could get a gap and if we started struggling we would be swept up by the group, rather than trying to hang onto the back of it. We’d been spared the headwind in the group but now in the headwind on our own it was tough work. Every now and again we could see the group behind us and the competitive instinct for the breakaway to stay away kicked in, pace was good and Rich was doing well. As we turned out and let the wind push behind us, a difficult section and a steep hill killed Rich’s knee which changed the rest of the ride for us.

Speed on the flat wasn’t too bad to begin with but each time the road went upwards, we were slowing right down. Eventually riders began to catch us, one by one, and we managed to jump onto the back of a group of 3 for awhile until a long drag meant they pulled a gap that couldn’t be closed. Eventually on this long straight stretch of road, our original group caught us after being away for 25 miles – I like to think that if the knee had held up then we’d have beaten them back. As it was we were firmly in stubborn resistance mode with Rich determined to finish at any speed. We did make it back, doing the 50 miles in 3 hours and 5 minutes – a respectable time, and I actually took my own photos on this event! Rich has also now bought clippy shoes ready for the next one…